If you are a conservative at the University of Pittsburgh, you may want to watch your back.

Last week, the Pitt Maverick – a student-founded newspaper that champions conservative values – filmed the vandalism of a “Youth for Trump” table outside the University of Pittsburgh’s Hillman Library. 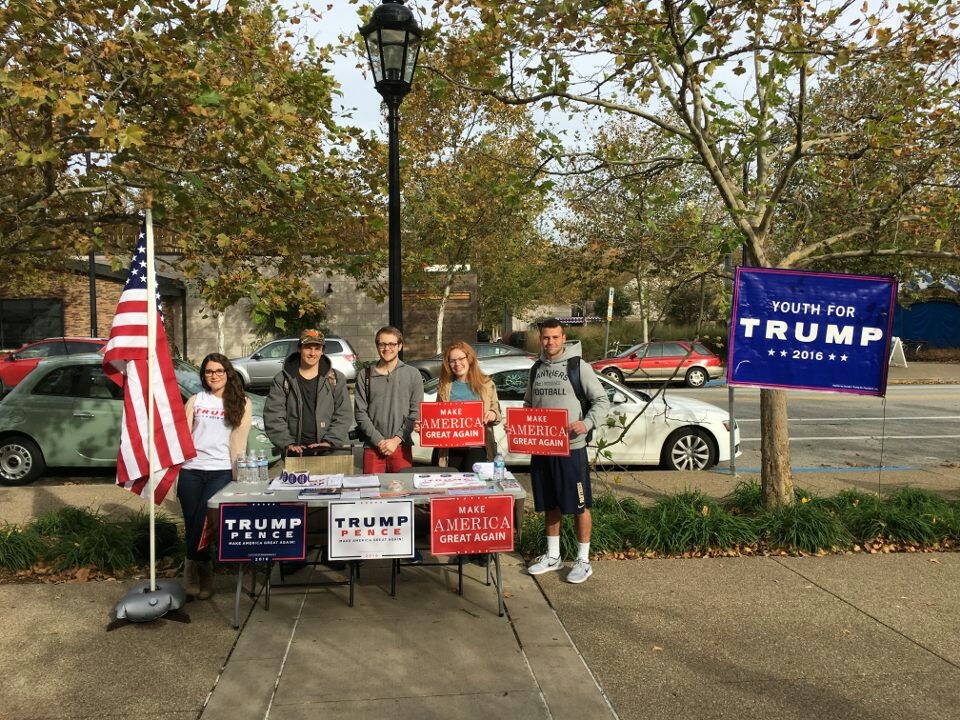 Marlo Safi, editor-in-chief of The Pitt Maverick, told The Daily Caller what she observed while she was at the at the table to report. “My friends were behind the table and an African American gentleman approached them and very violently took a stack of literature from the table.”

The students supporting Trump also received comments such as “Fuck the white male patriarchy!” and “I can’t believe you guys are actually people.” Towards the end of the day, at least six protesters approached the “Youth for Trump” table, swept the remainder of the literature to the ground, flipped the table over and fled the scene.

Despite the harassment and vandalism that occurred last Wednesday, a few brave students for Trump chose to table again this Monday. According to the Maverick, the protesters immediately started vandalizing by ripping down the “Youth for Trump” flag, causing the tree limb displaying the flag to break. Kirk Breiner, a volunteer at the table, told TheDC that the group of protesters cheered when the flag ripped down.

Safi also told TheDC that shortly after the flag was taken down, Lindsey Hern – a student manning the table ­­– was surrounded by protesters yelling profanities. One protester singled Hern out, screaming “how can you be a woman and support Trump?” Another can be heard threatening violence, yelling, “Can I shoot them first?”

The group of protesters surrounding the table soon grew to around 25 people. Hern, feeling very intimidated, called the campus police twice. She also proceeded to send a message to the other College Republican members pleading for more support to help keep the students for Trump safe.

Safi explained that even though she was clearly at the event as a reporter, she felt just as unsafe and physically threatened as the “Youth for Trump” members.

Before the campus police arrived to control the mob, Breiner told TheDC that two University of Pittsburgh football players chose to sit and watch out for the safety of the Trump-supporting students.

The effect of the “Youth for Trump” table didn’t stop there. According to both Safi and Breiner, some of the student protesters recognized the “Youth for Trump” members at a Halloween house party on Friday. Breiner told the TheDC that his group of friends, dressed as the Adams Family, were called fascists and ordered to leave because their presence not only made people at the party “uncomfortable” and made others “not feel safe seeing their faces.”

“They were calling us bigots and racists so I stood up and told them: listen: I am an Arab. I am a woman and I’m conservative as well. Please listen to me,” recalls Safi.  “I tried to rationally explain and have them hear me out, but they had no interest in that whatsoever. They would rather just taunt us.”

Breiner also explained that as their group left the party, the student protesters could be heard cheering audibly.

“From that point on, I started to feel unsafe. I told the president of the CR’s to tell the school that I am physically afraid to be on campus now because it’s started to get so bad–at this party especially– this is kind the moment where I honestly fear for my safety at this point,” Safi tells TheDC. “Appearing on campus, you know, having to go to the library, they now know my face. I always see them pointing out when they see me on campus property, in the library especially. I have actually stopped going to the library because I’m actually fearful that they will humiliate me, maim me, you know it. Male members as well, have begun to fear for their physical safety. It’s gotten to the point where I’m telling them constantly to be safe, and if that means not tabling, then please make your safety your first priority.”

Breiner says that these events have also affected his feelings about the safety of conservatives on campus.

“I really just don’t feel safe walking around campus anymore, night or day. I could just be paranoid, but these people have shown willingness for violence in broad daylight. More than myself though, I’m worried for the safety of the female conservative friends I have,” Breiner said in an email to TheDC. “We’re together a lot on campus, but obviously we can’t always use the buddy system.  Not to mention these people have the ability to recognize us. Things have gone far enough already, but things will really get serious if one of my friends gets hurt. I’m very ready for the election to be over and I genuinely fear the backlash we’re going to get after a Trump victory.”

In light of the protests on campus,Vice Provost and Dean of Students, Kenyon R. Bonner released a statement.

“Our responsibility as an institution is to encourage our students to engage in the political process—while cultivating an environment that allows them to do so within the standards of our democracy”, Bonner writes. “Reacting in ways that violate other people’s rights, threaten the well-being of others, or detract from a civil campus environment, will not help to advance your—or your candidate’s—cause.”