These are dark days indeed for our nation’s most important citizens: celebrities. These brave men and women are better than us, and their opinions matter more than ours do. If you don’t think so, ask yourself this: Do you have your own late-night talk show? Have you ever won a Grammy? How many illegal immigrants do you employ to clean up after you? How much Botox are you carrying around right now?

I didn’t think so.

We’ve let down our celebrities, America. We’ve betrayed the trust they’ve placed in us. And they’re very, very disappointed.

Let’s take a look! First up, here’s former SNL placeholder Taran Killam. He gets straight to the point:

If nothing else, at least this is a succinct encapsulation of prevailing leftist opinion about anybody who disagrees with them. Simple, direct, honest: They hate us.

But a little later, after Mr. Killam realized that rednecks buy movie tickets too:

In the light of day, I'm embarrassed for making thoughtless and mean statements. I was wrong. I'm sorry.

Everybody remembers Aaron Sorkin, right? He used to do that TV show about a POTUS who hid a debilitating medical condition from the public. Which could never happen in real life. Well, this week Sorkin wrote a letter to his daughters about the election results, and he was magnanimous enough to share his words of wisdom with the rest of us. Here, he explains why Trump won:

And it wasn’t just Donald Trump who won last night—it was his supporters too. The Klan won last night. White nationalists. Sexists, racists and buffoons. Angry young white men who think rap music and Cinco de Mayo are a threat to their way of life (or are the reason for their way of life) have been given cause to celebrate. Men who have no right to call themselves that and who think that women who aspire to more than looking hot are shrill, ugly, and otherwise worthy of our scorn rather than our admiration struck a blow for misogynistic shitheads everywhere. Hate was given hope.

That’s right: 60 million Americans are drooling, rape-crazy Klansmen. It couldn’t be that any of Sorkin’s assumptions about the world were wrong. Nice try, but no. This election result only reinforces what he already knew to be true. That’s how it works, because Aaron Sorkin makes a lot of money by typing out words for actors to say in front of a camera.

Speaking of open letters to America from people who know nothing about it, here’s one from Leslie Knope, a fictional character on the low-rated and now-cancelled sitcom Parks and Recreation:

I acknowledge that Donald Trump is the President. I understand, intellectually, that he won the election. But I do not accept that our country has descended into the hatred-swirled slop pile that he lives in. I reject out of hand the notion that we have thrown up our hands and succumbed to racism, xenophobia, misogyny, and crypto-fascism. I do not accept that. I reject that. I fight that. Today, and tomorrow, and every day until the next election, I reject and fight that story. I work hard and I form ideas and I meet and talk to other people who feel like me, and we sit down and drink hot chocolate (I have plenty) and we plan. We plan like mofos. We figure out how to fight back, and do good in this infuriating world that constantly wants to bend toward the bad. And we will be kind to each other, and supportive of each other’s ideas, and we will do literally anything but accept this as our fate.

I don’t know why I never watched that show. She sounds hilarious.

Hey, do you wanna watch Chelsea Handler and Barbara Boxer–

Wait, wait, come back! Let me finish: Do you wanna watch Chelsea Handler and Barbara Boxer… break down into sobs of despair? Yeah, I thought ya did.

Okay, I could only take a minute or two of that. But it’s good to know that their dreams have been shattered and they have no idea how it happened. They just know it’s not because of anything they’ve done. I hope they keep thinking so.

Chelsea is a contender, but nobody is angrier or more feminist than angry feminist Samantha Bee. And she just got as close to making me laugh as she has in about 10 years:

Get it? See, they filmed all that stuff when they thought their team was going to win — when they absolutely knew it — and then they had to figure out how to use the footage anyway. Because as they’re now beginning to realize, they nominated… Hillary Clinton. Pretty embarrassing.

You saw good ol’ Patton Oswalt in that delightful little sketch, and here he is justifying politically motivated violence as long as it serves his agenda:

Guys, the #TrumpProtests aren't "riots." They're to assure a nervous planet Earth that we'll go against him if he tries something crazy.

Who else has been thrown into fits of despair this week? I want to add an Amy Schumer joke here, but she would just end up stealing it…

Oh, here’s another one: Katy Perry just cancelled a concert appearance in China tomorrow night because of a “family emergency.” No Aunt Flo jokes, you pigs!

And if you think she’s suffering:

News Quote of the day:

Well, you get the idea. Whatever you do, don’t drink the tears of these grieving celebs like it’s the nectar of the gods. Don’t heckle them when you see them on social media or at their various chemical-dependency support groups. This is a tough time for them. Haven’t you hurt them enough already, America?

IMPORTANT UPDATE: Not a moment too soon, Katniss is here to lead the rebellion. 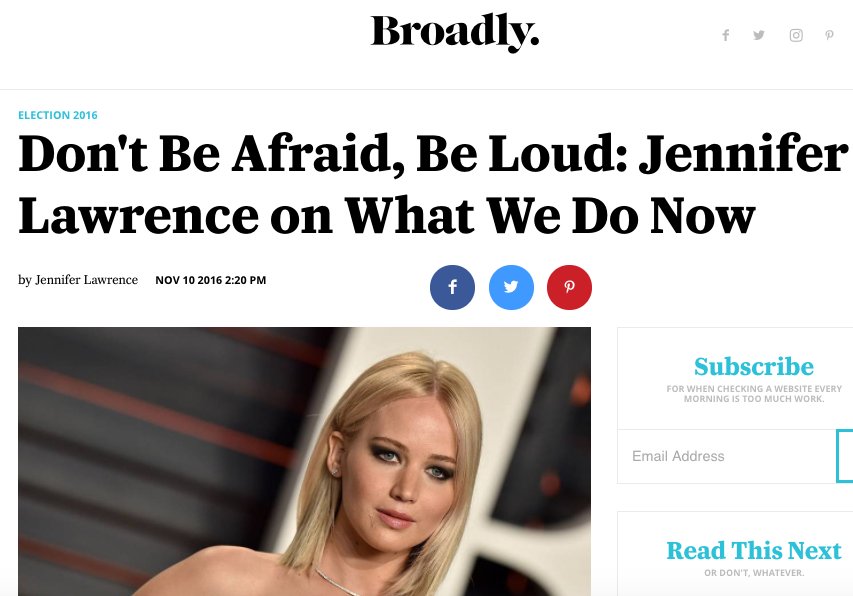 Fun fact: Jennifer Lawrence is the highest-paid actress in the world. She seems to be doing okay in this oppressive, woman-hating patriarchy.