Coal country went all in for Republican President-elect Donald Trump, and it’s very apparent why this happened when you look at the latest federal data on production cuts and mine layoffs.

Coal mine employment fell 12 percent in 2015 to its lowest level since the Department of Energy began collecting such data in 1978. West Virginia and Kentucky saw coal mine jobs fall 16 percent and 17 percent, respectively.

Both those states went overwhelmingly for Trump. The real estate mogul won nearly 63 percent of the vote in Kentucky and just shy of 69 percent of votes in West Virginia. Trump’s coat-tails in Kentucky were so strong that Republicans took control of the state’s legislature for the first time since 1921.

West Virginia overwhelmingly voted Republicans into office — with one big exception being the election of Jim Justice, a pro-coal Democrat, as governor. 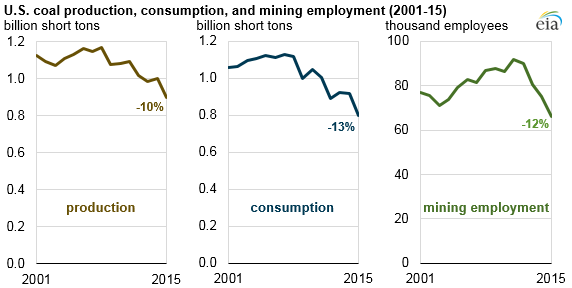 Mine employment has plummeted along with coal production. U.S. coal production “as of October 29, 2016, totaled approximately 607 MMst, 20% lower than the comparable year-to-date coal production in 2015,” according to the Energy Information Administration (EIA).

As consumption fell, so did mine employment in Appalachian states. More than 4,800 coal miners in West Virginia and Kentucky lost their jobs, according to EIA. Miners were also laid off in western Pennsylvania and eastern Ohio — both of which saw huge swings in favor of Trump.

Trump made coal country’s plight a major focus of his campaign. He blamed Obama administration regulations for making it harder to mine and burn coal, and promised to repeal the Environmental Protection Agency’s (EPA) signature global warming rule.

Former Secretary of State Hillary Clinton, on the other hand, focused on booting green energy production. Clinton’s plan for coal country was not to make it easier to mine, but to pump $30 billion into the region for economic revitalization to move them away from coal.

Clinton was also criticized, however, for saying her policies would “put a lot of coal miners and coal companies out of business” when talking about her spending plan for coal country.