Scarlett Fakhar was a reporter on KRIV-TV — a Fox affiliate in Houston, Texas — until a post she made celebrating the election of Donald Trump on her personal Facebook page, which was set to private, was made public.

In the post, Fakhar expressed glee at Trump’s victory, writing, “Since everyone is talking about how they woke up this morning…ill (sic) just go ahead and say I could barely sleep from how happy and relieved I was.”

After saying she’d “prayed about this for a long time,” Fakhar lamented how the country “has become more violent and racist under the Obama administration.”

Want to talk about going downhill? Look what Obama has done… How is made the entire country hate one another. Were you happy with how many people were killing each other in our own country? I work in news… And I hate to say it… But the number of African-Americans killing one another far outweighs the number of them being killed by whites. And now you have groups murdering police officers both black and white. How did this happen under the Obama administration? You guys want another administration like that?

Fakher then pointer her words toward millennial college supporters of Clinton. “And to all the college kids who wanted Hillary’s free education? HELLO? I have student loans…but I also have a job,” she wrote. “No one is entitled to anything. Get an education…then work hard like the rest of us. I will not be paying for your laziness.”

She then extolled the virtues of capitalism, slamming those who seek to punish successful people with higher taxes.

“And you want their money?” she asked. “Because you decided it’s ‘not fair.’ The founding fathers created a country based on capitalism. And that’s when it worked best.”

Finishing, Fakhar recounted how her father legally immigrated to the US from Iran with little money, working his way through college to become a successful engineer in spite of the fact that he didn’t know anyone or the language when he arrived.

She ended her post with, “God is so good. And He had a hand in this election.”

She announced her firing on her public Facebook page. 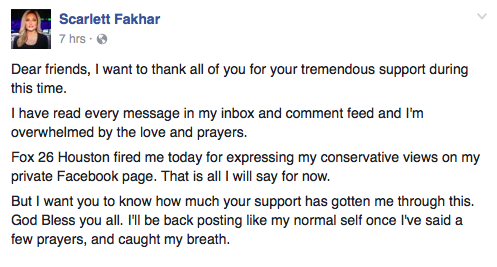 When news of her dismissal was made public, the Houston Chronicle characterized Fakhar’s original comments as incendiary, saying she was “extolling U.S. President-elect Donald Trump and chastising President Barack Obama and African-Americans.”

Fakhar did not appreciate the implication that she or her remarks were racist. She posted the following on her public Facebook page: 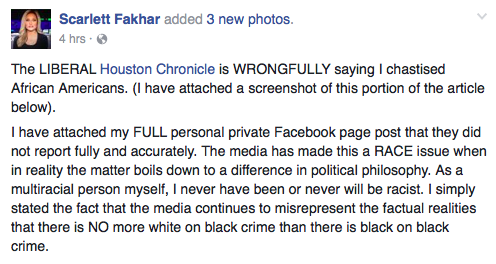 Screen captures of Fakhar’s full statement on the election are posted below. 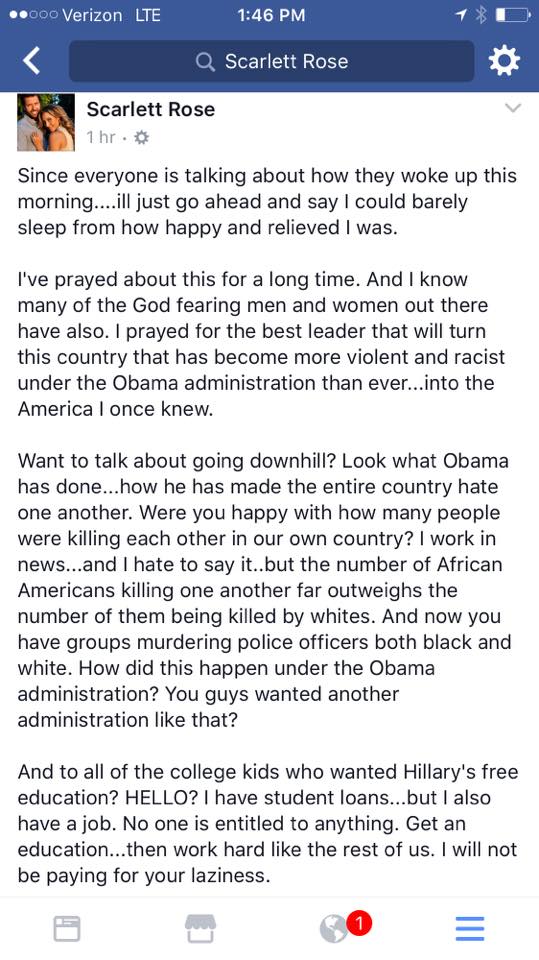 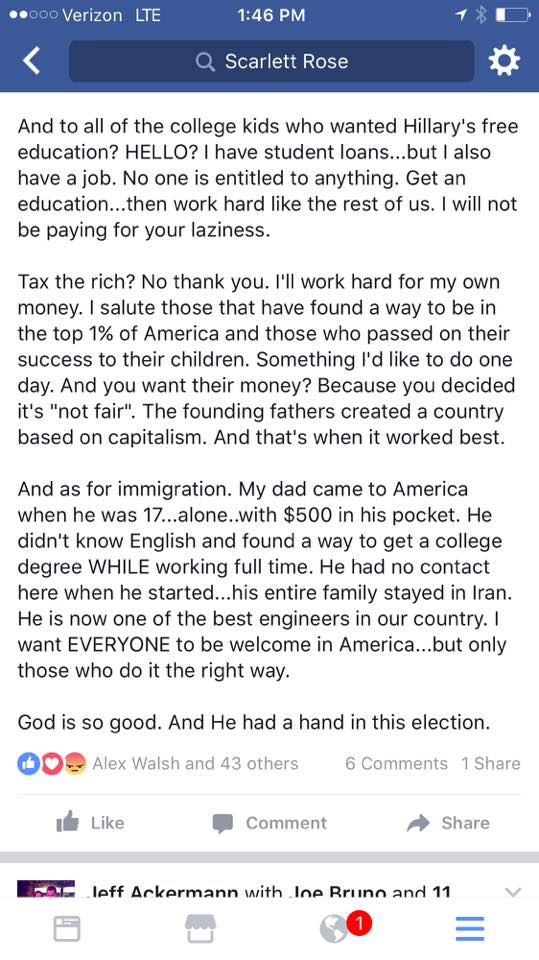 Update: This story was updated to include KRIV-TV’s confirmation of Fakhar’s dismissal.