Google has a plan to get 100 percent of its energy from renewable energy sources by 2017 in an effort to do their part to fight global warming.

It’s a big goal, but the media coverage around the tech giant’s announcement obscures the fact that Google is (and will continue to be) heavily reliant on fossil fuels — coal, oil and gas.

Google claims it’s the world’s largest consumer of renewable power with “commitments reaching 2.6 gigawatts (2,600 megawatts) of wind and solar energy,” according to the company’s announcement. But that doesn’t mean they are actually using 100 percent green energy.

“We’re still connected to the electricity grid and drawing power 24-7, even when wind and solar facilities located within that grid may not be producing energy,” reads Google’s green energy plan.

Wind and solar power are a growing share of global electricity generation, but renewable energy sources make up less than 5 percent of current production. It’s impossible for Google to actually power all its operations with wind and solar energy.

There are also technical issues. Even if renewable energy is available near a Google data center, it doesn’t mean consumers can physically connect to it.

Here’s how it all works: 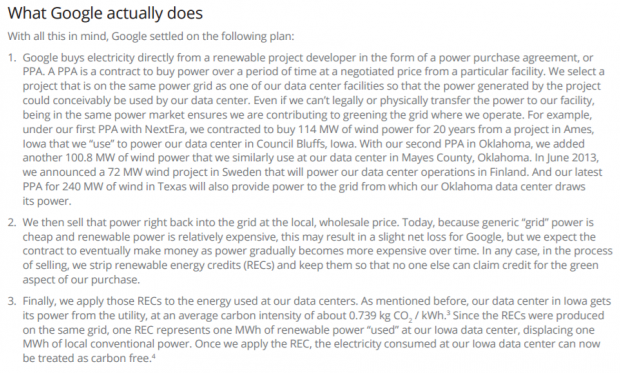 Source: Screenshot of Google’s “Achieving Our 100% Renewable Energy
Purchasing Goal and Going Beyond”

In short, Google agrees to buy power from a renewable energy company, sells that power directly onto the grid (at a loss) and then gets RECs for buying wind or solar power.

But readers would only learn that in the third-to-last paragraph in the New York Times’ write up of Google’s plan. The Guardian doesn’t mention this huge caveat until the last paragraph in its feature article on the subject.

Not every news outlet buried the reality of profit loss in Google’s plan, since it’s a big part of how Google will go green next year.

Overall, Google says it will buy enough green energy to cover its use of fossil fuels, meaning that the company will have to overbuy green energy in some areas to compensate for the lack of it in other areas.

“Our goal is global in that we are performing this calculation by summing renewable energy purchasing across all of our facilities around the world and by summing our energy consumption at all of our data centers and offices,” reads Google’s plan.

“While we work hand in hand with regulators and utilities in these areas to evolve the market structure to unlock renewable purchasing, we overbuy renewables on one grid to offset our inability to purchase renewables on another,” it continues.

Google is not the only company treating energy diversification like a zero-sum game. Microsoft and Amazon, for example, have similar goals to increase their green energy consumption in a bid to fight global warming.