A Clinton campaign aide says that a typo in a March 19 email sent to John Podesta is to blame for opening the campaign chairman’s Gmail account up to Russian cyber hackers.

The IT aide, Charles Delavan, tells The New York Times that his error — typing the word “legitimate” instead of “illegitimate” to describe a hacker’s email — continues to haunt him.

“This is a legitimate email,” Delavan wrote to Clinton campaign aide Sara Latham after she forwarded him a spear phishing email sent to Podesta’s account that was designed to look like official correspondence from Google.

“John needs to change his password immediately,” Delavan added, while also providing a link to a Google page that would have allowed Podesta to safely change his email password.

Someone, either Fisher, Latham or Podesta, clicked on a Bitly link embedded in the hacker’s fake email that led to a prompt to enter the password for Podesta’s account. That move gave the hackers access to Podesta’s account, and his nearly 60,000 emails. The contents of the account were published by WikiLeaks beginning in October. 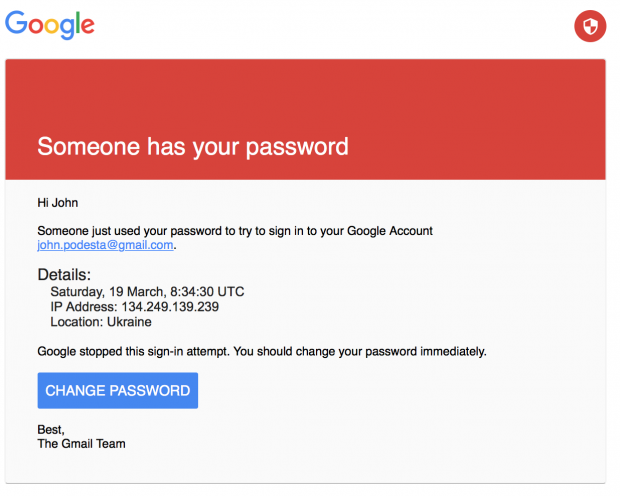 Delevan told The Times that he knew that the email to Podesta was a phishing scheme because the campaign was receiving dozens of similar attacks.

As The Times reported: “He said he had meant to type that it was an ‘illegitimate’ email, an error that he said has plagued him ever since.”

The hack, which was not particularly complicated, has led to growing calls to investigate the scope of Russia’s infiltration of various American political organizations. While U.S. law enforcement officials say that Russia was likely behind the cyber attacks, which also hit the Democratic National Committee, a debate has emerged over whether the Russian government specifically intended to help Donald Trump defeat Clinton or whether it merely wanted to disrupt the American political system.

The CIA reportedly believes that because only Democrats’ emails were released, Russia sought specifically to help Trump. But other evidence goes against that theory.

As The Times reported, the FBI knew as early as last September that a collective of Russian hackers known to the bureau as “The Dudes” were attempting to hack the Democratic National Committee. That was well before Trump was considered to have even a remote chance of winning the GOP nomination.

According to The Times, the DNC failed to accommodate the FBI at the time. In July, WikiLeaks published a trove of emails hacked from the DNC. The documents showed that DNC officials, including then-chairwoman Debbie Wasserman Schultz, spoke negatively about Clinton’s challenger, Vermont Sen. Bernie Sanders. The party had maintained through the primaries that they had no preference between Clinton and Sanders.