“Thought: There was (rightly) a cloud of illegitimacy over Bush, dispelled (wrongly) by 9/11. Creates some interesting incentives for Trump,” Krugman tweeted. 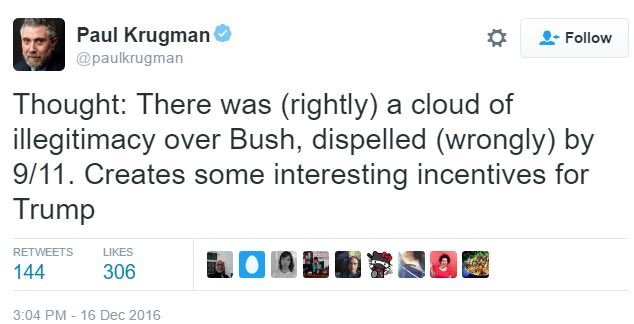 Krugman’s conspiracy theory was met with a mix of disbelief and mockery on Twitter.

Krugman, “The Conscience of a Liberal,” suggesting Trump will orchestrate 9/11-style attack to gain popularity https://t.co/UQYkAA6RWc

In which Krugman walks right up to line of predicting Trump will stage/allow a major terrorist attack against America for political gain. pic.twitter.com/kdp1kevqQw

People pay this man for his opinion. https://t.co/X96GgoGRLa

Krugman hasn’t been shy about his opposition to Trump. He previously predicted that the stock market would never recover from a Trump presidency, a prediction that so far has been way off. (RELATED: Paul Krugman Says Markets Will ‘Never’ Recover From Trump; Dow Hits Record High)

The Daily Caller has reached out to the Times regarding Krugman’s comment and will update accordingly when they respond.