Snopes, which will now have the power to declare what news is or is not legitimate on the world’s largest online platform, almost exclusively employs leftists.

Facebook announced Thursday that mythbusting website Snopes will be one of a few fact-checking organizations allowed to label stories as “fake news.”

Almost all of the writers churning out fact checks for Snopes have a liberal background, and many of them have expressed contempt for Republican voters. The Daily Caller could not identify a single Snopes fact-checker who comes from a conservative background. Snopes did not respond to a list of questions from TheDC regarding the site’s ideological leaning.

At least two of the site’s fact-checkers joined Snopes after writing for Raw Story, a far-left publication that describes itself as a “progressive news site that focuses on stories often ignored in the mainstream media.” Several others have demonstrated liberal partisanship.

Snopes fact-checker Arturo Garcia is an editor-at-large for Raw Story. Garcia is also a managing editor of Racialicious, a pro-Black Lives Matter blog. One of Garcia’s most recent stories at Raw Story was titled “The next time your right-wing uncle tries to ruin the holidays with ‘proof’ of creationism, show him these videos.”

Back when Trump was reportedly considering launching his own media network, Garcia implied that it would be a TV channel for white people, calling it “White Entertainment Television.” 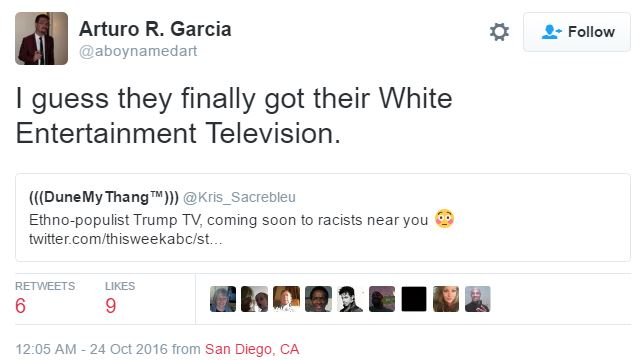 Another Snopes fact-checker, Bethenia Palma Markus, previously wrote for Raw Story and is listed as a “contributing writer” by Truth-Out.org, a left-wing nonprofit working to “spur the revolution in consciousness and inspire the direct action that is necessary to save the planet and humanity.”

Palma Markus has expressed her support for France’s decision to censor advertisements that have models deemed “too skinny.”

Former BuzzFeed science writer Alex Kasprak now works for Snopes, and he has let folks on Twitter know he thinks Trump is a bully and an idiot and compared the New York businessman to Kim Jong Il.

Another Snopes writer, David Emery, has expressed a clear bias against supporters of Trump and Trump himself. 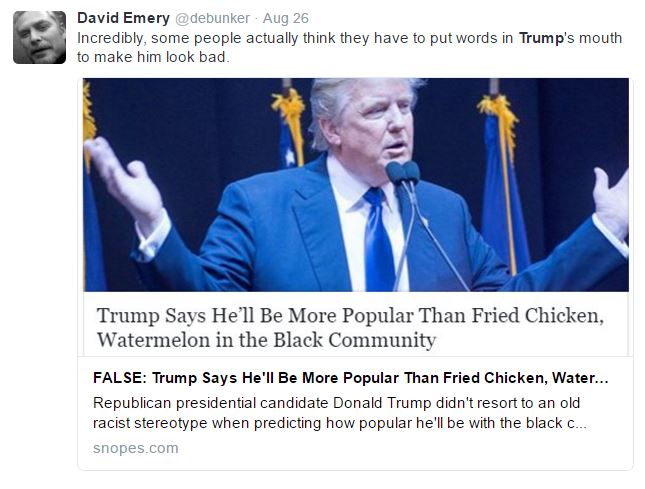 Facebook has been accused of partisanship in the past.

[dcquiz] Facebook routinely buried conservative news and topics from trending on the site and artificially made liberal topics part of the national discussion, former Facebook employees admitted last May. TheDC previously reported that the former Facebook trending news team was filled by liberals. It has since automated the Trending Topics section of its page.

TheDC asked Facebook for comment on the political leanings of Snopes’ employees. A spokesperson for the social media giant stressed that the fact-checking program is in a pilot phase and that the company will pay attention to community feedback.

Facebook announced Thursday it will use fact-checking organizations that have signed the Poynter Institute’s International Fact Checking Code of Principles. The Associated Press reports that Facebook is currently working with Snopes, ABC News, Factcheck.org and PolitiFact, and that the list could grow.

The spokesperson said Facebook will flag stories it thinks might be fake, based on feedback from its users, and that those four news organizations will then determine whether the story is real or not. If a story is determined to be fake, Facebook users will see a warning before they share the story.

When Facebook founder and chairman Mark Zuckerberg introduced the plan to combat fake news, he said the goal was to fight spam, not flag opinions.

“I understand how sensitive this is and I have instructed our team to proceed carefully and focus on fighting spam, not flagging opinions,” Zuckerberg said. “This is an early test, and I’m going to keep a close eye on it to make sure we’re fighting actual spam and hoaxes, and not limiting people’s freedom of expression.”