A story published by The Washington Post Friday claims Russia hacked the electrical grid in Vermont. This caused hysteria on social media but has been denied by a spokesman for a Vermont utility company.

The story said, “A code associated with the Russian hacking operation dubbed Grizzly Steppe by the Obama administration has been detected within the system of a Vermont utility, according to U.S. officials.”

The Post published the story before being able to get comment from the two utility companies in Vermont. The Burlington Electric Department would end up putting out a statement showing the premise of The Washington Post story as being untrue.

“Last night, U.S. utilities were alerted by the Department of Homeland Security (DHS) of a malware code used in Grizzly Steppe, the name DHS has applied to a Russian campaign linked to recent hacks,” a spokesman for the Burlington Electric Department said. “We acted quickly to scan all computers in our system for the malware signature. We detected the malware in a single Burlington Electric Department laptop not connected to our organization’s grid systems.”

The Vermont Public Service Commissioner Christopher Recchia told The Burlington Free Press, “The grid is not in danger.”

However, this false Washington Post story about a Russian intrusion into the American electrical grid has caused panic among journalists. 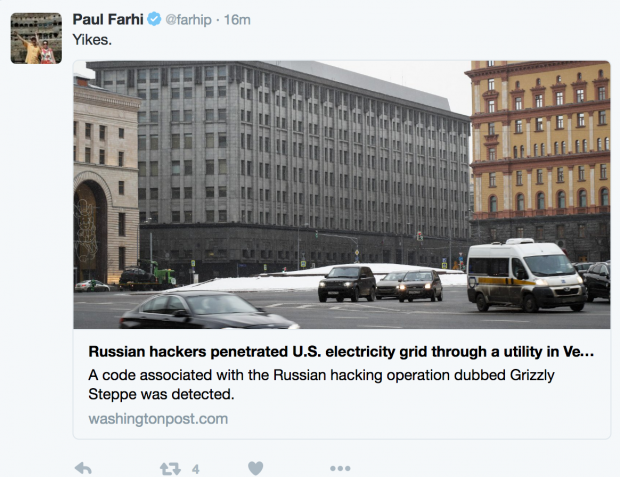 Politico cybersecurity reporter Eric Geller said about the Post story, “Pretty amazing how badly the Post appears to have mangled this one. You didn’t call the Vermont utility regulator before publishing?”

The Post has since updated the story. The headline changed to “Russian operation hacked a Vermont utility, showing risk to U.S. electrical grid security, officials say.” The updated story said the “code entered the Vermont utility’s computers,” but the utility spokesman’s statement stated the code was found on one laptop.