Greenland’s ice sheet kicked off 2017 gaining about eight gigatons of snow and ice, which is well above what’s usually added to the ice sheet Jan. 1 for the last 24 years, according to Danish meteorologists.

In fact, Greenland’s ice sheet has been gaining ice and snow at a rate not seen in years based on Danish Meteorological Institute (DMI) data. DMI reports the Greenland ice sheet’s “mass surface budget” has been growing significantly since October.

Greenland’s “surface mass budget” for winter 2016-2017 is already more than two standard deviations higher than the northern ice sheet’s mean snow and ice accumulation over the last 24 years. DMI data shows the ice sheet added 8 gigatons of ice and snow Jan. 1, well above the standard deviation for that day. 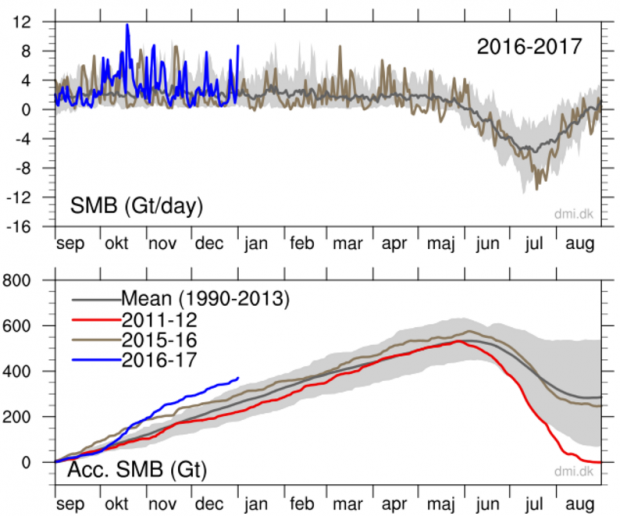 DMI notes Greenland’s ice sheet “snows more than it melts,” but adds that “calving of icebergs also adds to the total mass budget of the ice sheet.”

“Satellite observations over the last decade show that the ice sheet is not in balance,” according to DMI. “The calving loss is greater than the gain from surface mass balance, and Greenland is losing mass at about 200 Gt/yr.”