A radical left-wing activist who attends the University of California, Berkeley is the prime suspect in a fatal stabbing, and all one of his friends cares about is that he’s labeled by his preferred pronoun in news articles covering the crime.

Pablo Gomez Jr., 24, is suspected of stabbing one woman to death in Berkeley on Friday and injuring another in a separate incident. He was arrested by police in Burbank on Saturday afternoon.

Berkeleyside, an independent news outlet in the liberal enclave, published a detailed account of the story on Friday. But it corrected the piece after a friend of Gomez’s contacted the outlet to say that the suspected killer prefers to be called by the pronoun “they” instead of “he.”

Here’s a passage from the story:

Police have identified the wanted person as 24-year-old Pablo Gomez Jr. of North Hollywood. According to Gomez Jr.’s Facebook page, they are a UC Berkeley student who lives in Berkeley. [A friend contacted Berkeleyside after publication to say that Gomez Jr. uses the pronoun “they.” This story has been updated.]

And the appended correction:

This story was updated after publication to reflect Gomez Jr.’s preferred pronoun, according to a friend who contacted Berkeleyside.

Gomez, who lists his major on Facebook as Chicanx/Latinx Studies, is active in numerous progressive and leftist causes at Berkeley.

As part of Alliance for Climate Education, Gomez interviewed Phillip Agnew, the founder of the anti-racism group Dream Defenders.

Gomez, who was born in the U.S., is also listed as the primary point of contact for the Queer Alliance & Resource Center, an activist group that helps UC-Berkely’s queer community. 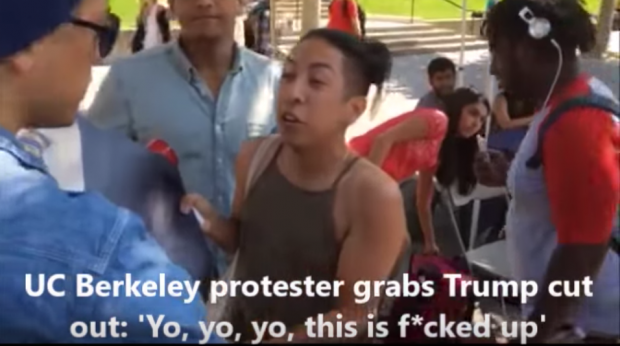 Gomez appears to harbor strong anti-white feelings. His Twitter feed is chock full of comments denigrating white people. And in one recent post, he wrote that whites will soon face “annihilation.”

Gomez’s Facebook page shows he supported a “Day of Action for Palestine” protest on campus last year and also helped organize a protest after Berkeley officials washed away chalk writings that were supportive of sexual assault survivors.

The Daily Caller spoke to a Berkeley police department spokesman on Saturday afternoon. He was unable to provide names of victims or discuss possible motives for the attacks.

Many commenters on the Berkeleyside article criticized the outlet’s focus on Gomez’s gender pronoun preferences.

“Is this for real? Dude (allegedly) kills someone and we’re worried about the pronoun he goes by? Who cares!” one commenter wrote.

“Who the hell cares what pronoun he/she/it prefers to be called by? I’ll bet his victims would have preferred not to be stabbed,” wrote another.