“Homeless guy in DC on the Women’s March: ‘This has been the greatest day in my life — I’ve seen every ass-shape in town.'”

— Freddy Gray, in town from London’s The Spectator.

“Will someone please tell the writers of #SNL hate crimes are UP against Trump supporters & Christians. #StopSpreadingHateSNL” — Scottie Nell Hughes, Donald Trump surrogate.

In praise of SNL

“Finally just watched. Never seen a press secretary so angry about something so stupid in all my life.” — Jon Favreau, former speechwriter to President Obama.

“Going to tell a threaded story of a 9 p.m. press conference intended to deceive the press and therefore the public.” — Steven Dennis, Bloomberg.

The Observer: Trump’s speech was great

“Whatever you think of President Trump’s First Inaugural address, it will go down as one of the toughest, most honest ever delivered.” — Charlie Hurt, TWT.

Touré Neblett: “Trumpworld wants to establish that the media is not to be believed ever—and Trump’s coalition is already conditioned to disbelieve media.” — Neblett, ex-MSNBCer and host of Binge Worthy. 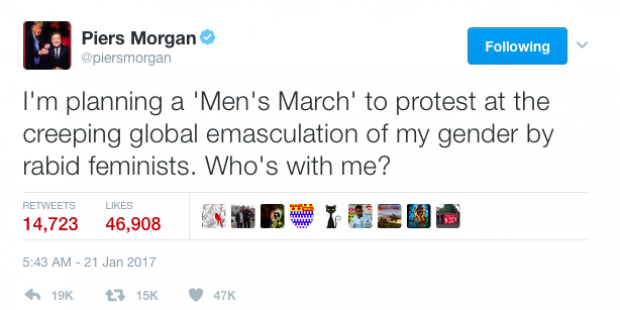 “Hey, so I know how you all love linking to Piers Morgan’s bad tweets but how about…not linking to his bad tweets? Just a thought.” — Marie Le Conte, London-based BuzzFeed News reporter.

“Dammit, a @dcexaminer box ended up in the fire after all.” — Kyle Feldscher, Washington Examiner.

“Things I thought I’d never see: a new president gets out of the limo on Inauguration Day to promote his own hotel.” — Howard Fineman, HuffPost.

“The man who forced Spicer to give that statement controls our nuclear arsenal. Enjoy your Saturday!” — WaPo‘s Dave Weigel.

Ethics, standards and the media

“Barbara Bush could go home today but is staying at the hospital to keep close to George HW who is recovering well. Long live the love story.” — Paul Bedard, Washington Examiner gossip columnist.

“It’s my bday & I can hate my president if I want to.” — Jon Savitt, self-described “cute but approachable” writer for TIME.

“CNN is not a news organization and @brianstelter is not a journalist. #FakeNews.” — Roger Stone, Trump surrogate, Ana Navarro hater.