“A pox on all PR emails sent with high importance. BAD.”

Benny Johnson: I got the Supreme Court judge thing FIRST damn it!

Had this scoop at 2PM.

“I mean, you’d think after the 9th Goldman Sachs pick we’d drop the Trump Populism shtick.” — Eric Boehlert, Media Matters, a “news” site that is an arm of the Democratic Party.

“Love that feeling when you know you have a really good story from 2015 buried somewhere in the internet and can’t find it.” — Aaron Mehta, Defense News.

“I am confused why anyone — especially anyone on the left — would ever agree to do Tucker Carlson’s show.” — WaPo political reporter Ashley Parker.

“Some things IJR was 1st on since the election:

To ban or not to ban…

“I wonder what Steve Bannon will eventually get locked up for? Feel free to send predictions.” — John Ladarola, cohost of “The Young Turks” on Fusion.

Almost as bad as imagining your parents having sex

“I called my mother on the telephone. We couldn’t talk long, though: FIFTY SHADES OF GREY started on television and *she had to go*.” — Matthew Clayfield, AM, PM, and The World Today, in Sydney, Australia.

“As the world turns darker, i retreat further and further into the comfort of british comedies about neurotic failsons.” — Katherine Krueger, Talking Points Memo.

Reporter says woman next to Trump is ‘guarding her crotch’ 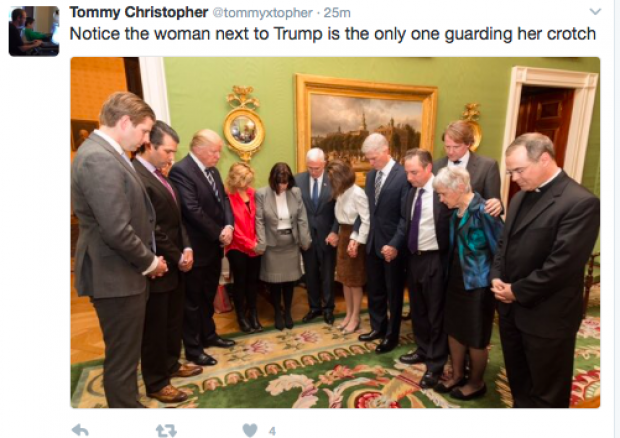