Robert Reich, the Labor Secretary under Bill Clinton and a Berkeley professor, suggested on Thursday, contrary to all evidence, that right-wing groups staged the violence that shut down a Milo Yiannopoulos event that was to be hosted on the liberal university campus on Wednesday.

“I was there for part of last night, and I know what I saw. Those people were not Berkeley students. They were outside agitators,” Reich said during a panel discussion with CNN’s Don Lemon.

“There are rumors that they were right-wingers, they were part of a group that were organized and ready to create the tumult and danger you saw that forced the police to cancel the event.”

Protests organized ahead of Wednesday’s event gave way to violence shortly before Yiannopoulos was set to take stage. Fires were set, banks and other businesses were vandalized, journalists were threatened and supporters of Yiannopoulos and Trump were beaten.

One gruesome video showed men dressed in all black beating a Trump supporter with a shovel until he remained unconscious in the street. Another video showed a female Trump supporter being blasted with pepper spray while giving an on-camera interview. The attacks spurred Trump to tweet early Thursday that he will consider cutting off federal funds to Berkeley.

CNN’s Lemon seemed perplexed by Reich’s suggestion that Yiannopoulos, Breitbart or right-wing groups were behind the violence.

“You think it’s strategy by Yiannopoulos or right-wingers, put this on in effort to show there’s no free speech on a college campus like UC-Berkeley?” Lemon asked.

“I wouldn’t bet against it, Don,” said Reich.

“Again, I saw these people. They all looked almost paramilitary, not from the campus,” he added.

“I’ve heard — again I don’t know want to say factually — but heard there’s some relationship there between these people and the right wing, and the right-wing movement that is affiliated with Breitbart News.” 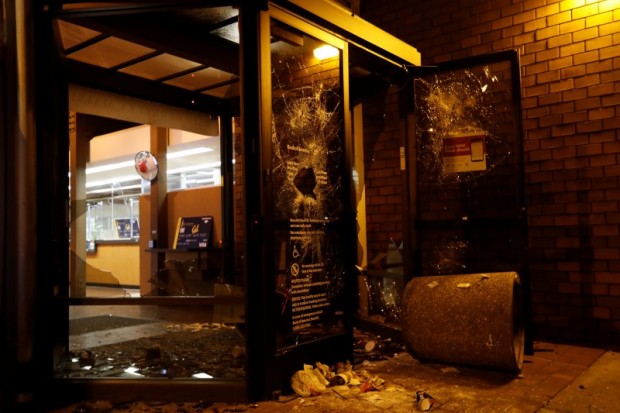 A vandalized Bank of America at UC Berkeley during a demonstration over right-wing speaker Milo Yiannopoulos. (REUTERS)

Prior to the Berkeley event, the group encouraged left-wing activists to shut down Yiannopoulos’ talk. On Thursday, after the violence had subdued, Refuse Fascism issued a statement calling the violence protests “righteous.”

“Last night, thousands of students, professors and others protested the appearance and organizing rally of Milo Yiannopoulos, a major fascist operative, shutting it down. This was righteous and much more like this is needed,” reads a statement on the group’s website.

But Reich ignored that left-wing support for violence and pinned Wednesday’s agitation on Yiannopoulos and conservatives.

“Berkeley opened its biggest auditorium to this right-wing Breitbart news character — this hateful odious person — but said free speech is most important thing we stand for and it was these outsiders who caused police to come in and cancel it,” Reich told Lemon.