The Kingdom of Saudi Arabia is paying at least one large public relations firm in Washington, D.C. to recruit American military veterans who will agree to visit Capitol Hill to tell members of Congress — in person — that they oppose a new federal law allowing civil lawsuits against state sponsors of terrorism.

Saudi Arabia’s government also appears to be funding luxurious, all-expenses-paid trips to Washington, D.C. for the veterans which include stays at the $500-per-night Trump International Hotel.

In November, two Republican senators, John McCain and Lindsey Graham, proposed an amendment to JASTA that would allow Americans to sue foreign governments for terrorist attacks only if the foreign nations “knowingly engage with a terrorist organization directly or indirectly, including financing.”

Saudi Arabia is paying Qorvis MSLGROUP, “one of the largest public relations firms in the world,” to lobby for the McCain-Graham amendment.

Qorvis is the primary registrant for two consultants — and possibly more — who are working in different parts of the country to recruit veterans to oppose JASTA in the halls of Congress.

One of the consultants Qorvis has hired — on an undisclosed salary — is Eric Eisenhammer, the founder and CEO of Dauntless Communications, “a digital communications and public affairs company” in California.

A third person attempting to recruit veterans who will personally tell members of Congress they oppose JASTA is Sarah Durand, the former chief of staff for Kentucky first lady Glenna Bevin (and, before that, president of the Louisville Tea Party).

Durand’s may or may not have any affiliation with Qorvis.

Malachias Gaskin, a combat veteran from Tennessee, told TheDC that he initially received a vague recruiting email in January from a friend, also an ex-soldier, seeking veterans to speak in Washington.

Details were scant and remained scant, which Gaskin said he found perplexing.

The email came from Durand. She used a Gmail account which does not appear to have included a signature line.

The petition to which Durand alludes in her email is entitled “Fix JASTA Now!”

Gaskin told The Daily Caller that Durand failed to provide concrete details about what he would be speaking about in Washington.

Nevertheless, he said, he was offered the opportunity to stay at the Trump International Hotel in Washington, D.C. — a “five-star hotel with spa” where a standard room costs about $500 per night.

“There was going to be a dinner,” Gaskin said. “Then, we would be going to talk to Congress.” 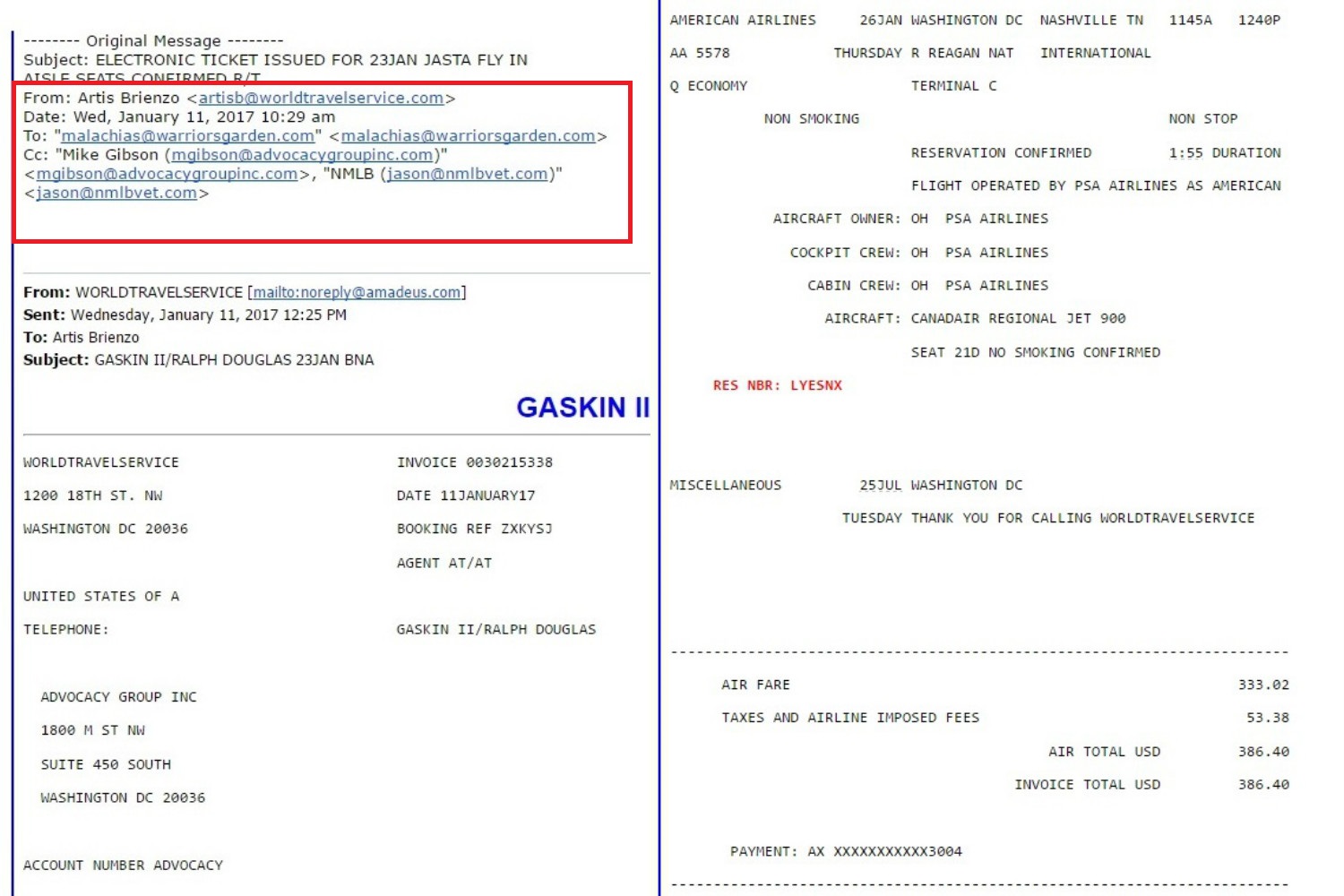 “They literally never told me anything about what the trip was for,” Gaskin said. “It kind of ticked me off. I was asking very specific questions. I asked who was paying for it and they wouldn’t tell me.”

A spokesman for Qorvis MSLGROUP strenuously disagrees with the notion that there has been any intent to deceive veterans.

“We’re not telling veterans what to think or what to say,” the spokesman also said. “The charge that veterans didn’t know what they were talking about is not really the truth. It could have been the truth for a couple you talked to. But the veterans who come to Washington are conversant with JASTA. They all think it is bad policy.”

Among the veterans who have lobbied against the law are military attorneys and retired generals, the Qorvis spokesman said.

Terry Strada, a widow and the national chair for the 9/11 Families & Survivors United for Justice Against Terrorists, spoke to TheDC about the recruitment of veterans to oppose JASTA.

Strada also suggested that the Saudi government is likely financing the trips to Washington.

“We believe Saudi Arabia is funding the flights and paying for hotels for these veterans,” she said.

Strada’s group has been engaged in a long struggle to sue the Kingdom of Saudi Arabia in federal court. The lawsuit is a primary reason Congress overwhelmingly overrode President Barack Obama’s veto and passed JASTA in September 2016.

Gaskin said he believes that one reason military veterans might decide to take an all-expenses-paid trip to Washington to lobby members of Congress is because it offers a chance to meet powerful people and feel something like a celebrity.

A source who wishes to remain anonymous told TheDC that the recruitment of veterans to take paid trips to Washington is occurring in several states including California, Nevada, Tennessee, Indiana and North Carolina.

“They give you dates, flights and itineraries,” the source said.

Gaskin said he took it upon himself to find out more about the Justice Against Sponsors of Terrorism Act.

“When I started calling friends of mine who are politically savvy, they said you really need to look into this,” Gaskin also said.

Once Gaskin gained an understanding of JASTA, he said, he concluded that he does not want it to be amended.

“I was like: this is why they aren’t giving me information,” he said. “When I start asking questions and you ignore it, I’m not going to do business with you.”

Gaskin sent an email to Durand on Jan. 12 laying out his concerns:

Dauntless Communications, the Qorvis-contracted consulting firm in California, set up an exhibition booth at a gun show held Jan. 28 and 29 at the Grand Sierra Resort in Reno, Nevada, according to a source. 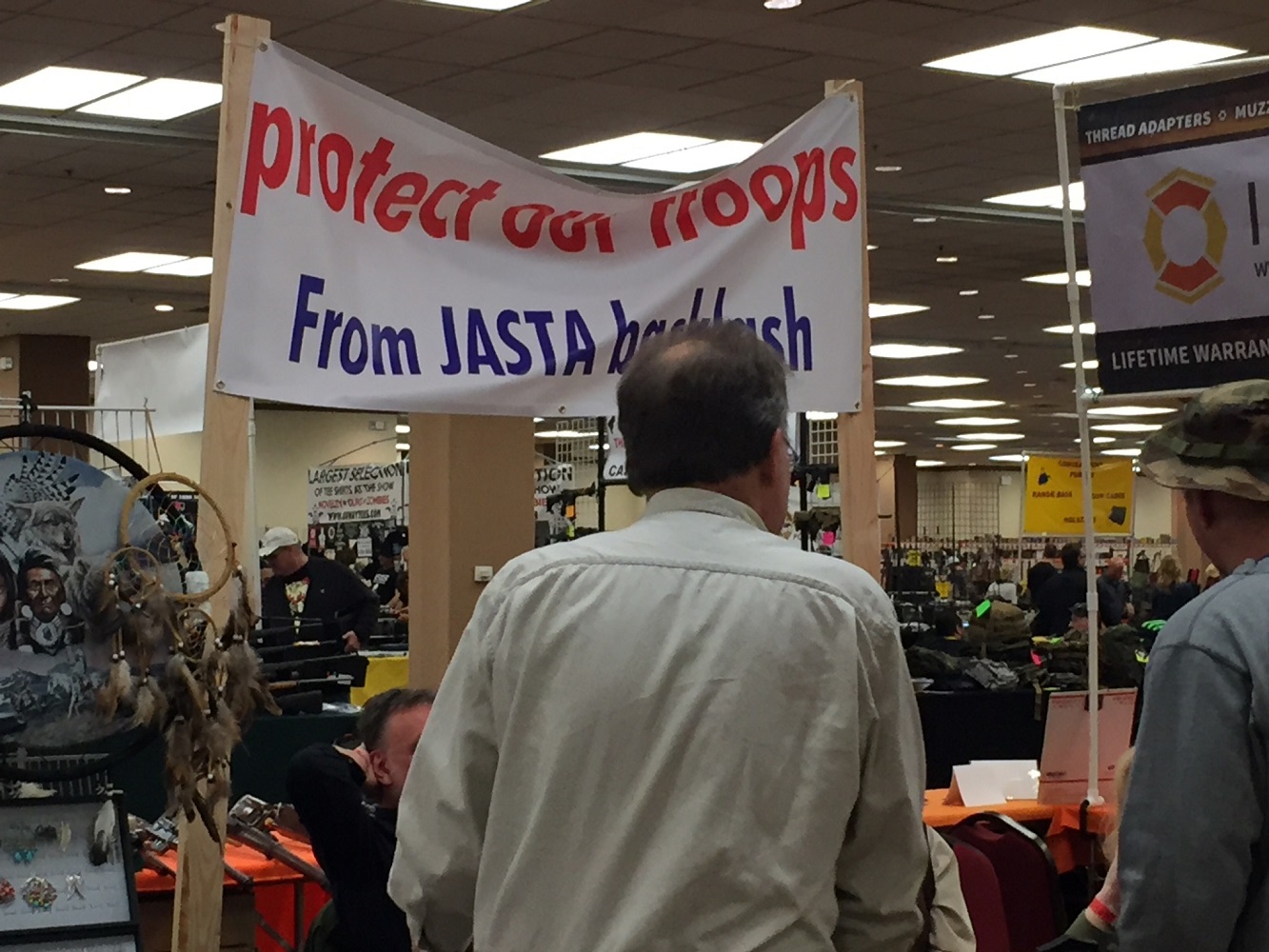 Dauntless was using pre-typed forms to attempt to collect information from veterans at the Reno gun show. The top of the forms features a pledge to “support and lobby for any amendment or rewrite to JASTA.” Veterans have an option to indicate that they “are interested in going to Washington, DC and making my views known” to members of Congress. 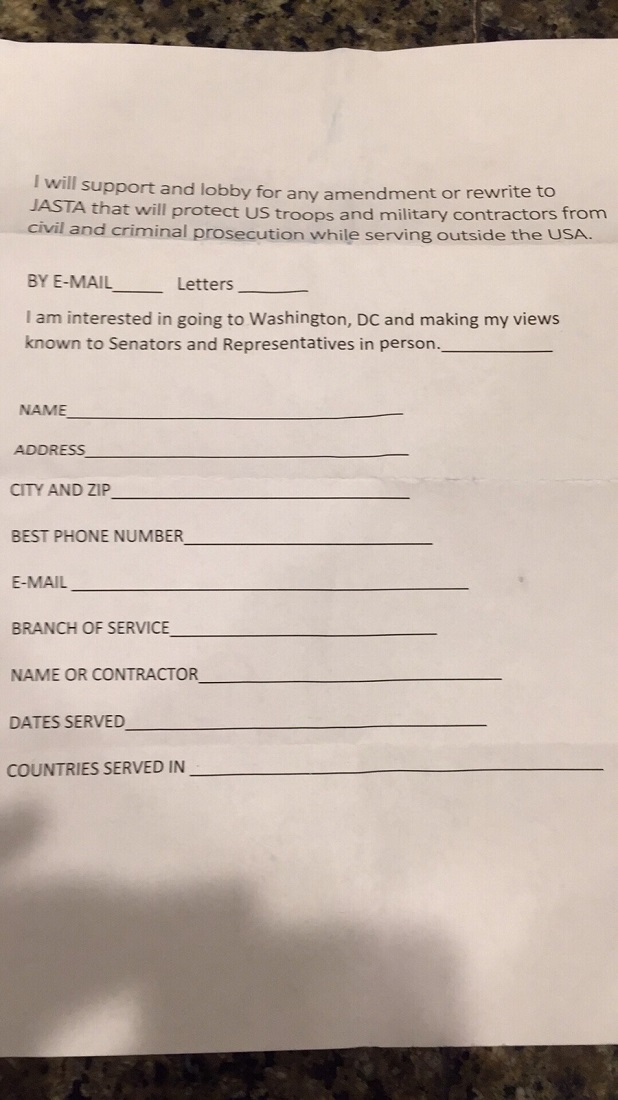 Dauntless Communications ran the booth and was registered at the gun show, TheDC’s source said.

In a short-form registration statement pursuant to the Foreign Agents Registration Act of 1983 dated Oct. 8, 2016, Eisenhammer, the Dauntless Communications CEO, describes himself as a consultant.

He lists the Kingdom of Saudi Arabia as the single foreign principal for whom he intends to render services on behalf of Qorvis MSLGROUP. 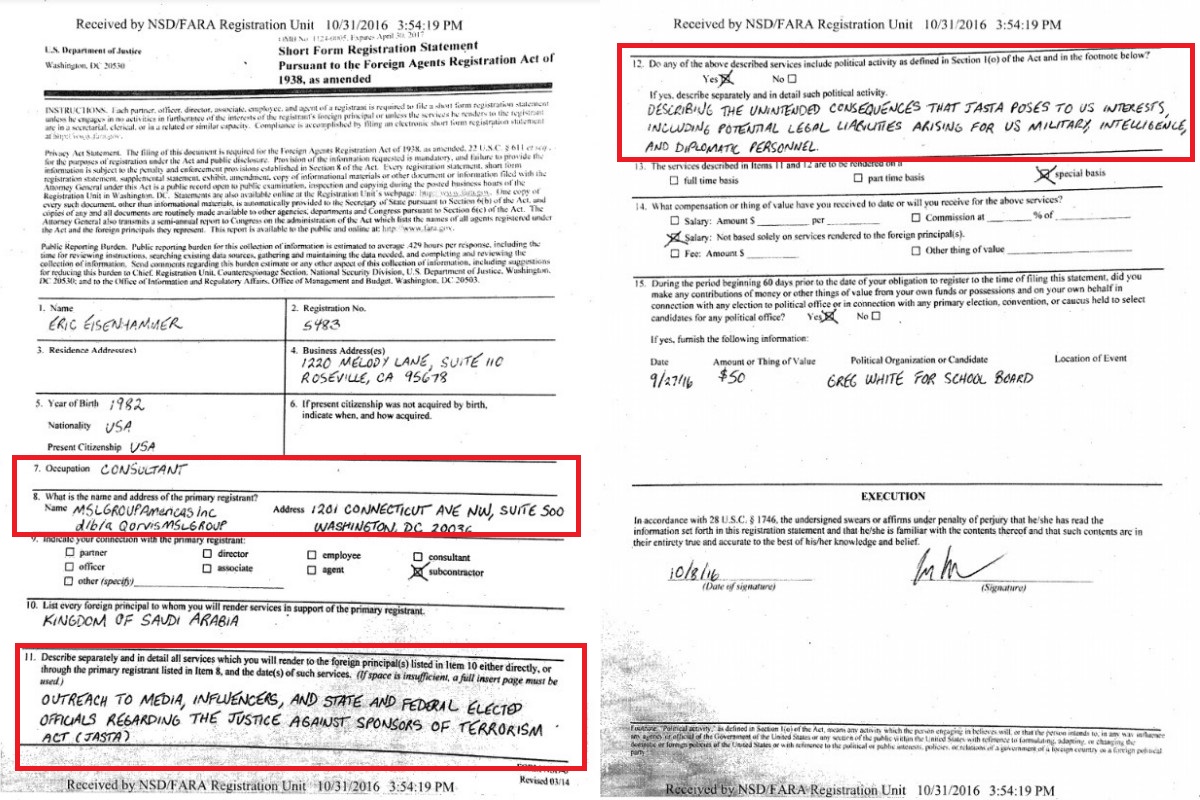 In a section where Eisenhammer is required to list the services he will render for Saudi Arabia, he writes: “Outreach to media, influencers, and state and federal elected officials regarding the Justice Against Sponsors of Terrorism Act (JASTA).”

Eisenhammer claims to be receiving an undisclosed salary for his work.

The business address he provides is a low-slung, nondescript office building in a suburb of Sacramento.

TheDC has also obtained several letters of the kind described by Eisenhammer. They are sets of identical missives addressed to members of Congress.

For example, one set of exactly identical letters is signed by a retired Coast Guard veteran named Patricia Fletcher. 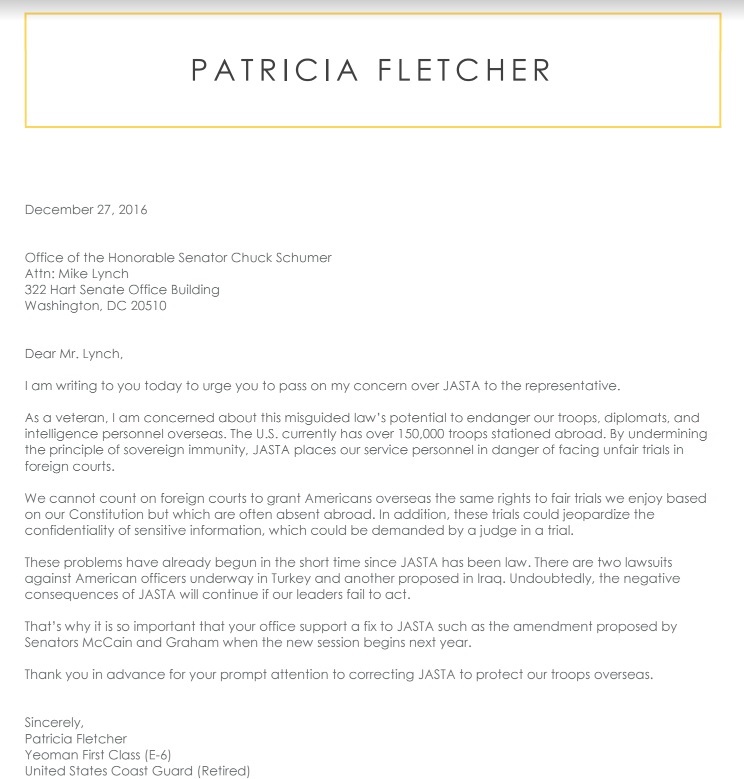 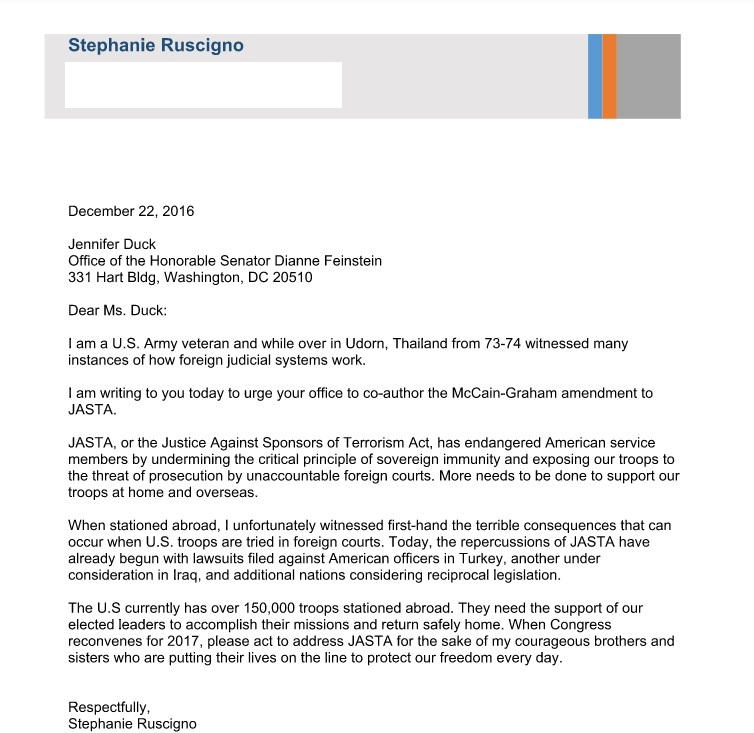 The other consultant working for Qorvis is Stanley, in Tennessee. In a Foreign Agents Registration Act statement dated Oct. 11, 2016, he lists the Kingdom of Saudi Arabia as the single foreign principal for whom he intends to render services on behalf of Qorvis MSLGROUP. He says he is receiving a flat fee of $12,000. His corporate affiliation in Tennessee — if any — is unclear. 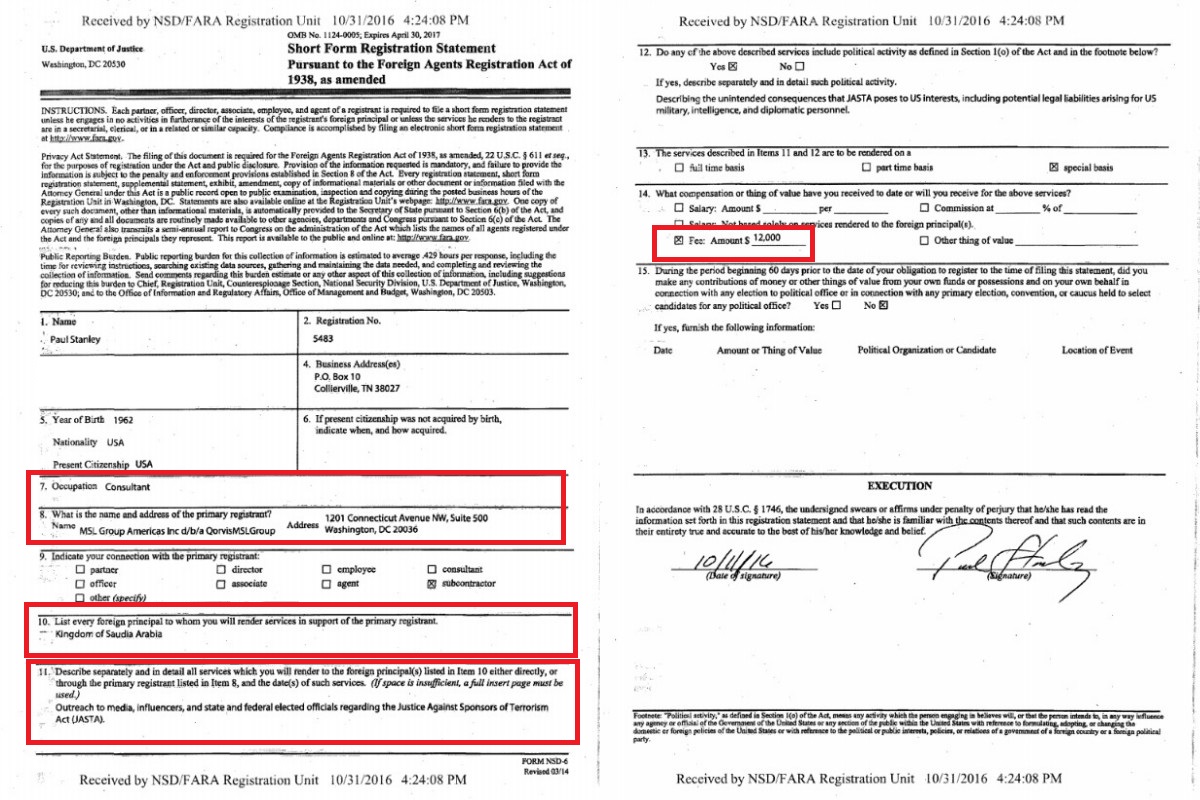 The Foreign Agents Registration Act, which dates back to 1938, requires U.S.-based public relations firms to make public disclosures if they are funded by foreign nations and promote political propaganda about those nations.

In 2004, the U.S. Justice Department raided the offices of Qorvis MSLGROUP — then called Qorvis Communications — in downtown Washington. D.C. and Northern Virginia as part of a criminal investigation into Saudi payments to U.S.-based lobbying firms for political purposes, according to a contemporaneous account by The New York Sun.

In response to the 9/11 law (now and when it was a bill), the Saudi government has been engaging in a furious lobbying effort against it.

As of early November, The Hill reports, the Kingdom of Saudi Arabia is paying 14 lobbying firms to convince Congress to change the law — and thus to prevent any federal trial in which Saudi Arabia must defend itself.

Fees are exorbitant. As of October, Saudi Arabia was paying American lobbyists and public relations firms $1.3 million each month to fight against the right of Americans to sue terror-financing nations, according to The Hill.

Strada, the 9/11 Families & Survivors United for Justice Against Terrorists chair, detailed the mechanics of lobbying members of Congress in Washington. In a nutshell, she told TheDC, lobbying means literally walking into congressional office buildings to greet members of Congress and speak to staffers. In this case, the military veterans would communicate rehearsed talking points.

The veterans would likely try to visit key offices, such as those belonging to congressmen assigned to the House Armed Services Committee.

“And then it’s following up,” Strada said. “They want to make it look like a groundswell.”

Opponents of the Justice Against Sponsors of Terrorism Act say that the law could potentially cause U.S. soldiers, diplomats and private citizens to be at risk because of retaliatory legislation in other nations. Opponents also say that JASTA dilutes the principle of sovereign immunity.

[dcquiz] Supporters of the law say it will deter state-sponsored terrorism in the United States and give victims of Sept. 11 the possibility of redress in civil court.

“Senator Graham is now stabbing the 9/11 families in the back. He and Senator McCain are seeking to torpedo JASTA by imposing changes demanded by Saudi Arabia’s lobbyists,” the 9/11 widow said in a statement sent previously to TheDC. (RELATED: EXCLUSIVE: Saudi Arabia Is Astroturfing America To Roll Back 9/11 Law)

During his presidential campaign, now-President Donald Trump expressed vigorous support for the Justice Against Sponsors of Terrorism Act in its current form.

The Daily Caller’s attempts to seek comment from Dauntless Communications and Durand were unsuccessful.