WaPo‘s alleged media watchdog Erik Wemple is having a rough day. And any way you slice it, a grown man complaining about another man getting more positive attention than him is just embarrassing.

Wemple’s kvetching is not over anything important, like his kids or wife are sick. Or that someone in his own family is getting into a dog shit of a fight with a neighbor.

Instead, Wemple is all bent out of shape about a profile that The Atlantic‘s McKay Coppins wrote a profile on Fox News anchor and The Daily Caller founder Tucker Carlson, whose show is enjoying masterful ratings since he replaced Megyn Kelly. [RELATED: Wemple Can’t Even Get A Word In As Tidal Wave Tucker Washes Him Out To Sea]

(Full disclosure: Yes, Carlson hired me. I’m biased in who I like better here. But I also speak the truth.)

Come on, Wemple, admit it. You’re still wah wahing about your recent appearance on Carlson’s program, in which you sat there bug-eyed as you failed to defend your own crappy brand of journalism. As Carlson presented the hard truth about your hypocritical reporting, the angrier you became, the louder your doughy, thuggish voice grew. I particularly enjoyed your most infuriated moments, when you addressed Carlson as “Mister Carlson.” You also took the opportunity to praise yourself, saying you’d hold your own reporting and ability to write about The Washington Post against anyone’s reporting in the entire media industry.

Wow, Wemple. Even for you, that was pretty disgusting and not even true. 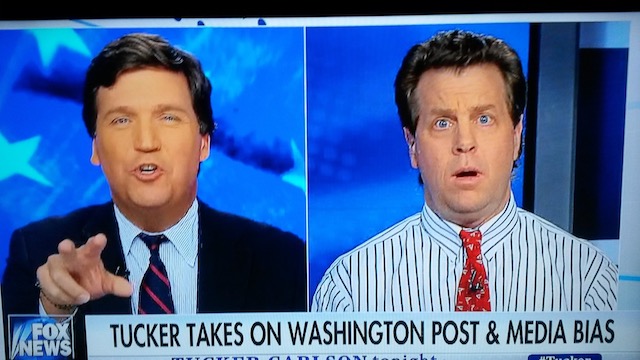 On Thursday, Wemple went on Twitter to spank the The Atlantic for being too kind to Carlson, which by the way, it wasn’t. The piece is critical of Carlson and at times, makes him seem like a snobby jerk for liking “long, luxurious, multi-course lunches.” It reveals that Carlson isn’t too sympathetic towards his liberal neighbors and plans to swim in an anti-Trumper’s pool when he moves out of the country. The piece also says his 9 p.m. FNC show is doing quite well — which it is.

For those of us who know Carlson, the profile misses quite a bit. But that’s the way it goes when you profile someone — you get what the person is willing to give you, you try to fill in the gaps with hard-scrabble reporting and hope and pray for the closest version of reality you can get.

A weird element of the piece was showcasing Carlson in a bow-tie, which he hasn’t worn in close to a decade. The “bow-tie” bullshit was in the headline and the graphic. Yes, it used to be his signature. But no, it isn’t anymore, which talkshow host  Larry King considers to be about the dumbest thing Carlson ever ripped from his life. “Would I give up suspenders?” King asked when I interviewed him a few years back, thoroughly irritated to learn that Carlson no longer wore bow ties. “No,” he said, defiantly answering his own question. 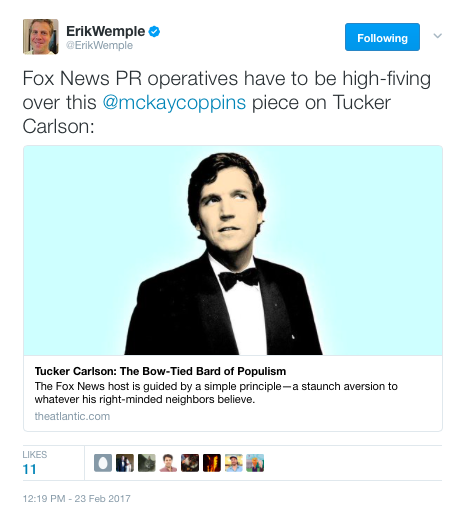 Wemple is obviously jealous and angry — a diabolical cocktail for any human being. Maybe if one day you gain some self-awareness you, too, can have a big splashy profile of yourself in the pages of The Atlantic.

Until then, get over yourself.