The Republican senator added, “If they object, they are now carrying out the desires and ambitions of Vladimir Putin, and I do not say that lightly.”

Sen. Paul subsequently objected to the ratification of the treaty, and walked off the Senate floor. “That is really remarkable,” McCain said. “That a senator, blocking a treaty that is supported by the overwhelming number, perhaps 98, at least, of his colleagues, would come to the floor and object, and walk away.” 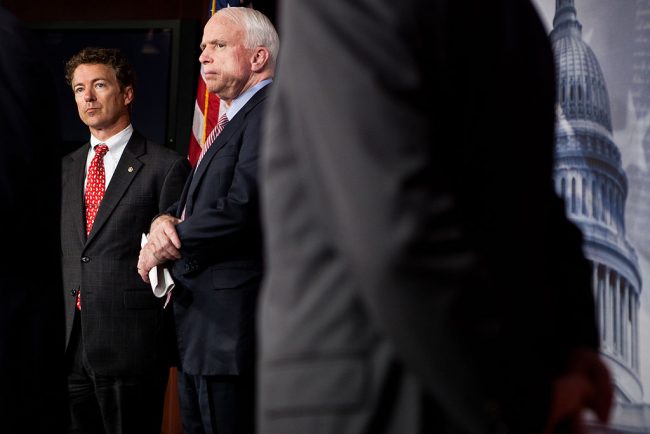 Sen. Rand Paul (R-KY) and Sen. John McCain (R-AZ) listen during a news conference on Capitol Hill to introduce a Republican jobs proposal to compete with that put forward by President Obama on October 13, 2011 in Washington, D.C. (Photo by Brendan Hoffman/Getty Images)

The Arizona senator said that since Paul walked off the Senate floor he must have no justification for his objection to the treaty. “So I repeat again, the senator from Kentucky is now working for Vladimir Putin,” McCain added.

Paul told The Daily Caller in a statement: “Currently, the United States has troops in dozens of countries and is actively fighting in Iraq, Syria, Libya, and Yemen (with the occasional drone strike in Pakistan). In addition, the United States is pledged to defend 28 countries in NATO. It is unwise to expand the monetary and military obligations of the United States given the burden of our $20 trillion debt.”