It’s been a rough couple of months for thespian and artbro Shia LaBeouf. Back on inauguration day, he started a performance art project called He Will Not Divide Us (http://hewillnotdivide.us), in which attention-seekers from across the land gathered to troll each other in front of a live webcam. Shia got arrested for attacking a guy, live on the Internet, and the Museum of the Moving Image in NYC shut the whole thing down.

Soon after, Shia moved the resistance a couple thousand miles west, planting the webcam in front of the El Rey Theater in Albuquerque. That lasted less than a week. At that point, HWNDU was moved to an “undisclosed location.” Instead of millennials and other losers repeating the titular phrase into the webcam, it just displayed a shot of a white flag with that phrase printed on it.

This wasn’t enough to deter Shia’s alt-right tormentors, who went to ridiculous lengths to track down the flag’s location in rural Tennessee. Then they did this:

It’s tough to make out, but that’s a MAGA hat and a Pepe the Frog t-shirt. Praise Kek, etc.

Now Shia is turning this into an international incident. He’s moved HWNDU all the way to merry old England. More specifically, it’s now at the Foundation for Art and Creative Technology (FACT) in Liverpool. They just put out a statement about it:

A flag emblazoned with the words “HE WILL NOT DIVIDE US” will be continuously live-streamed from the arts organisation to www.hewillnotdivide.us for four years, or the duration of the 45th Presidency of the United States…

In an era where elections can be influenced by activity online, a space with no physical borders, HEWILLNOTDIVIDE.US resonates with the changing state of global politics. The work articulates the role the internet—particularly social media—plays in the construction of opinions, identities and ideologies. 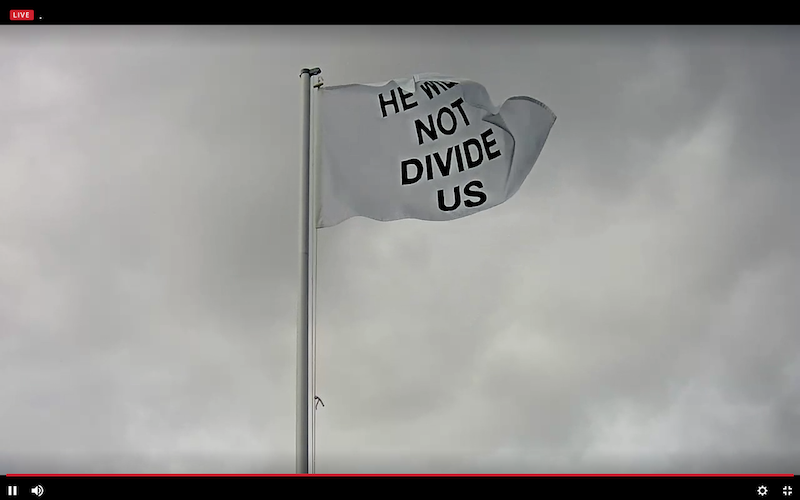 I’m assuming it’s just a matter of hours before the 4chan trolls mess with it again. Unless it’s behind a barbed-wire fence with armed guards, which would be even funnier.

I don’t like anybody involved in either side of this whole fiasco, but I admire both Shia’s tenacity and the trolls’ commitment to ruining his earnest gesture of protest. They deserve each other.