Things are Boyle-ing over at Breitbart News.

To say Lee Stranahan‘s relationship with the site is complicated would be putting it way too mildly.

But like a jilted lover who keeps coming back for more and then one day finally breaks and decides he won’t be abused any more, Stranahan is once again parting ways with the site he can’t seem to quit for good. This time it’s because working under Political Editor Matthew Boyle is a situation he finds “weird” and untenable. 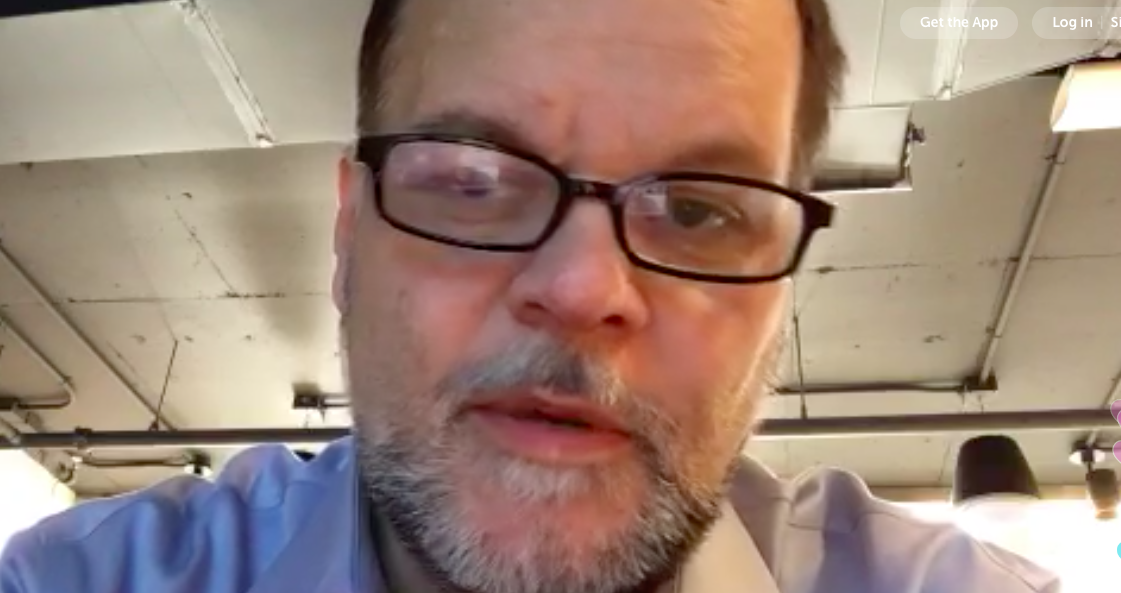 In September of 2013, Stranahan quit Breitbart News for the first time. A few months later, he was back and working for Breitbart Texas. Like a decent soap opera, six months later, in March of 2014, he was done for a second time — this time, he was fired after a series of tiffs with Breitbart‘s Texas Bureau Chief Brandon Darby. At the time, there was a chorus of complainers who didn’t like what the site had become under Steve Bannon, who took over after Andrew Breitbart died. What Stranahan despised most was not being able to communicate directly with Bannon and Larry Solov, the site’s longtime CEO and President. Darby wouldn’t allow any go between.

Here’s a whole freaking mess of internal emails that were exchanged in 2014. The exchange includes Bannon, now a chief strategist to President Trump, telling Stranahan and Darby to “get their shit together.”

But love is strange. In 2015, Stranahan jubilantly returned to Breitbart News.

And that is so two years ago.

It’s March, 2017, and Stranahan’s ties to the site are once again severed.

“Oh I don’t know,” Stranahan said in a lengthy phone discussion with The Mirror Wednesday evening. “Larry and I said we could work on projects in the future. But being a salaried employee under the current structure was no longer working for me. That’s what I told him. I’m not pissed at Larry or anything like that. I liked it there under Andrew and I went to work there under Bannon. When he [Bannon] hired me back, I didn’t have problems exactly. The problem next time was under Brandon. Brandon wouldn’t allow me to talk to Bannon. So that didn’t last long at all. Then Bannon hired me back. He called me.”

History has a way of repeating itself.

Stranahan’s relationship with Breitbart soured on Tuesday night. This is when Stranahan released a few videos on Periscope. In a rambling exposé of sorts, Stranahan explained his frustrations about covering the White House for Breitbart and Boyle pulling rank and kicking him out of White House briefings.

In one, he said, “I’m not thrilled about things. …My job is in jeopardy right now. …I’ve been ordered by Matt Boyle not to go into the White House again. He won’t give me any possible explanation for it. This has been going on for several hours now.”

In a dramatic voice he spilled his guts, saying, “I’ve dealt with this for hours and hours and hours of him threatening me. …Matt doesn’t have kids. I have five kids to feed. Losing a job is a big deal to me.”

In another video, Stranahan became more belligerent: “Getting the story out at Breitbart doesn’t help,” he said, basically trashing his own site. “If I cared a lot about wages I wouldn’t be working in journalism now would I? What’s at stake here is the truth. What’s happening here is that if you’re trying to break through the media, you’ve gotta have something. …It’s not been a fun day to be a journalist. …I’m quite sure that Breitbart is as frustrated with me as I am with them. I’d like to think of it as a familial frustration.”

The Mirror requested a comment from Boyle about Stranahan.

On Wednesday night, Stranahan released yet another video about leaving Breitbart. This time, he was far more mellow and measured in his words.

Not mentioning Boyle, he said Breitbart News management would not allow him to cover White House briefings. “If a decision comes down that doesn’t allow the to do that anymore, I don’t even feel like I really had a choice even though I tried really hard to not have the outcome be what it is,” he said. “If I don’t feel like I can do my best work there, it’s time to go.”

He told The Mirror that he’d been attending the White House briefings for about five to six weeks. Breitbart‘s Charlie Spiering is the official White House reporter for the site. But Stranahan, the lead investigative reporter, was working on stories he felt would benefit from questions he planned to ask at the briefings.

In a stroke of luck last week, the White House Office of Management and Budget Director Mick Mulvaney was.

“I had not been called on yet,” Stranahan explained. “Mulvaney called on me last Thursday. The whole trick is you keep showing up. Because I was standing behind [Fox News correspondent] John Roberts. Spicer calls on the same people constantly. It’s bizarre.”

A few weeks ago, Stranahan tried to get Spicy to warm to him. He thought this might happen when he and Bannon accidentally crossed paths at the White House — right in front of Spicy!

“So when I introduced myself to Spicer a week ago, he [Bannon] had never seen me that well dressed,” said Stranahan. “So he’s [Bannon] in a suit sport coat and tie, pocket square and all that…he came back and said, ‘Look at you!’ He hugged me. Then he left. Spicer said, ‘Bannon’s gone corporate.'”

Stranahan explained that being in a suit in Washington is a look he had to create from scratch.

“I cover protests,” he said. “You know what I mean? When I started covering the White House…living in DC is not cheap. I had spent a lot of my own money on clothes and everything else because I wanted to look good. I didn’t want to do anything to make Breitbart look bad. So I had like 12 different ties and a variety of coats so I could go in and look good everyday.”

On a side shopping note, Stranahan says he shops at Saks Off Fifth, a cheaper version of Saks Fifth Avenue.

Recalling his Mulvaney moment, he said, “I made sure I asked a good coherent question. I was helping Breitbart’s reputation honestly because I can have coherent conversations about stories. I wasn’t there to troll anybody.”

So what was Boyle’s problem with Stranahan attending the briefings?

“There was no coherent reason given,” Stranahan said by phone, noting that Boyle and Spiering gave him the green light and even helped him get credentialed. “It was totally weird.”

When pushed on what’s wrong with Boyle’s management style, Stranahan is reluctant to reveal much. (To the point where it’s excruciating to not be able to know what in the hell is going on.)

“Matt’s a nice guy and a Red Sox fan,” said Stranahan. “We had gotten along fine. We had a couple of disagreements, but that’ll happen.”

One thing was for certain: “Well, they were not happy with what I said in the Periscope discussion.”

He said what management told him “wasn’t unfair” but “was nothing I felt like doing.”

And this: “It was going to be a degree of micromanagement I was not comfortable with. I trust my own news judgment. Every time there has been a conflict with Breitbart, I’ve always been right about the story. I would have thought they would have figured that out, but they haven’t figured it out.”

In many ways, Stranahan prefers being his own island at work. “I trust my own news judgment better than I trust anybody else’s,” he said. “It’s an interesting situation over there right now. The hierarchy is sort of what happened after Bannon left. It’s just sort of the way things worked out. I’ve been honest with people there with what I want to do and why I want to do it. They weren’t opposed to it, but in other ways they were.”

Stranahan said Breitbart News could have been six months ahead of the ISIS and refugee crisis. “It’s really your [their] loss at the end of the day,” he said. “I’ve rubbed their noses in that many times. I was working on the Russian hacking story that was published Monday morning. My goal [at the White House] was to bring more attention to the story.”

Still, he had high praise for Solov.

“To his credit, Larry didn’t fire me,” he said. “He could have. I love Larry and I wish him well. At the end, we parted amicably.”

Except what end is this? And is it really the end?

Asked if he had a sense of humor about how many times he has quit Breitbart and how many times they’ve hired and fired him, Stranahan wasn’t laughing. He wasn’t even smiling through the phone.

“I don’t,” he said. “I’ve never really actively tried to get a job at another outlet. I just don’t like jobs. I like projects. I worked in TV and film for a long time. I was at Access Hollywood for five years. I was their lead graphic artist and then HuffPost.”

“I guess I’m weird,” he said. “I never worry about this stuff. So now I’m quitting and I’m staying here in D.C. and I’m probably going to pursue my own thing to some extent.”

This is when things got really hilarious. The truth is, if he had his druthers, Stranahan would return to Breitbart News.

In fact, he wants to do radio for them on the weekends, which is Boyle’s job.

“Bannon was smart and had done stuff,” said Stranahan. “He was someone you could learn something from. I was happy to work for him. I just do what I do. I’m not unhappy. I’ve tried to be very clear with Breitbart that I don’t think they utilize me properly. Bannon began to use me properly and then he left.”

Stranahan said if Breitbart had told him in 2015 that he’d be working for Boyle he would not have accepted the job.

“If they offered me a position working under Boyle I would have laughed and said no,” he said. “No, no thanks. It’s not that Matt is a bad guy but that doesn’t sound awesome. It sounds a little weird to me. [Editor-in-Chief] Alex [Marlowe] is involved in the day to day at a high level. As somebody who has always picked their own assignments, getting assigned things by somebody else can be a challenge. Alex very rarely assigned me things.”

Asked if others working at Breitbart are unhappy with Boyle’s management style, Stranahan said, “I would say that’s entirely possible.”

When questioned about the idea of working for Breitbart again sometime down the road, he said, “Things could change in the future.”

Let’s be clear here. Stranahan isn’t knocking Boyle because he’s younger than him. “He’s in the same general age range as my oldest son,” he said. “There are old people who are dumb. I wouldn’t want to work for them either.”

Asked if he worried about paying the bills, he replied, nonchalantly, that he wasn’t.

“None of my children have ever starved to death.”