Counties with nuclear power plants were three times more likely to vote for President Donald Trump over former Secretary of State Hillary Clinton in the 2016 election, according to an analysis by the Nuclear Energy Institute.

Trump won all but 13 of the 63 counties with nuclear power plants during the Republican primary with higher margins than previous Republican candidates. In the general election, Trump won 48 out of those 63 counties. The few nuclear counties that went for Clinton only did so by small margins.

Twenty-two reactors are located in battleground states, like Florida, Pennsylvania, Ohio, Wisconsin, Iowa and Michigan, that voted for Obama in 2012 and Trump in 2016. 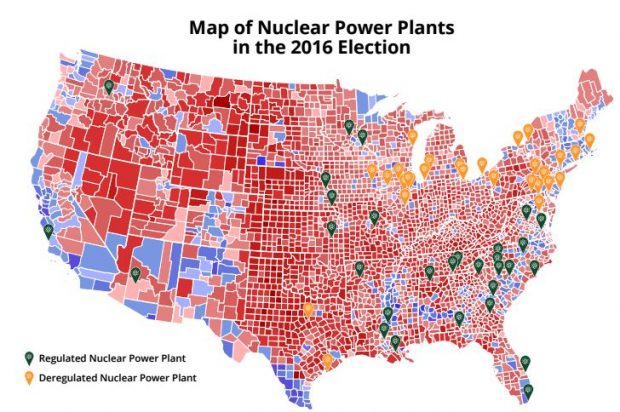 “Looking across the map of the United States, nuclear is a red-state industry and a blue-collar enterprise that is a critical element of the coalition that elected the president,” John Keeley, a spokesperson for the Nuclear Energy Institute (NEI), told The Daily Caller News Foundation. “Given the razor-thin popular vote margin in the states that delivered the Electoral College to President Trump, these are voters he can ill-afford to lose.”

Trump made several strong public statements in support of nuclear power during the campaign and even supported it after the 2011 Fukushima nuclear disaster in Japan.

In contrast, Clinton claimed to be “agnostic about nuclear power” and switched positions on the issue eight times while running for office over the course of several political campaigns.

Trump was more vocal in his support of nuclear energy than 2012 Republican nominee Mitt Romney. Additionally, Romney broadly agreed with President Barack Obama’s position on nuclear power. Both Romney and Obama both wanted to spur nuclear power development and opposed the storage of used nuclear fuel at Yucca Mountain.

In some states, this edge may have been decisive. For example, Trump won the state of Michigan’s 16 electoral votes by a margin of roughly 11,000 in a state where almost 2.3 million people voted for him. Michigan’s three nuclear power plants may have created that margin.

“There is a lot more in each of those counties than nuclear plants, but each plant has year-round employment of hundreds of people, most with spouses, siblings, parents, or voting-age children,” Keeley said. “In addition, many local businesses recognize nuclear plants as the local economic mainstays. And the plants are generally the largest single taxpayers in many of those counties, a fact that is locally recognized.

Of the 23 counties in blue states with nuclear power plants, Trump won the Republican primaries in 21 of them.

Trump won his largest share of Republican primary voters in Ocean County, New Jersey, the site of the Oyster Creek Nuclear Power Plant. He won 88 percent of Ocean County Republican in the primary.

Nuclear counties where Trump lost in the GOP primary can largely be explained local politics, according to NEI. Two of these counties were in Texas and voted for Texas Sen. Ted Cruz. Two nuclear counties in Ohio went to Gov. John Kasich, and one nuclear county in Florida went to Florida Sen. Marco Rubio.