“The Fake Media (not Real Media) has gotten even worse since the election. Every story is badly slanted. We have to hold them to the truth!”

After being trashed… for weeks about disorganized the whole thing allegedly is, with a late purchase of eggs, first lady Melania Trump writes, “Looking forward to hosting the annual Easter Egg Roll at the @WhiteHouse on Monday!”

“Overheard upstairs from my home office: ‘Mom! What happens when you microwave a jelly bean?'” — David Martosko, Daily Mail.

“I’m not sure Donald Trump’s ignorance is his problem so much as it’s our problem, and the world’s problem,” — Vox Editor-in-Chief Ezra Klein. He links to a story by Vox Executive Editor Matthew Yglesias, who writes that Trump doesn’t know what he’s talking about. Read that here. Lots of insults fly and Trump is not going to like this one. According to Yglesias, Trump is ignorant, lazy and has wild swings.

“I guess I’m just playing checkers here, but it’s hard to see what attacking Democrats in general does for Trump at this point.” — Bill Kristol, editor-at-large, The Weekly Standard.

NYT Adam Nagourney drops off panel due to ‘family situation’

On Monday night, Writers Bloc will convene a panel to discuss the media. According to LAObserved, panelists include LAT‘s Cathleen Decker, CNN’s Dylan Byers and Karlene Goller, a First Amendment lawyer who teaches media law at UC Irvine Law School.  The story explained that “Adam Nagourney, the New York Times bureau chief in Los Angeles, had had to drop off the panel and go out of town due to a family situation.”

AP: “No stiff upper lip: Prince Harry describes mental problems since death of his mother Princess Diana” Grade: A- (Stands out in a sea of similar headlines, while still being dramatic.)

The Sun: “MUM’S DEATH LED TO TOTAL CHAOS: Prince Harry reveals his 20-year agony over Princess Diana’s death which left him close to a breakdown and in need of counselling” Grade: A+ (Points for high drama.)

BBC: “Prince Harry ‘in total chaos’ over mother Diana’s death” Grade: F+ (Untrue, since he’s not in total chaos now. But good effort to inject drama into the headline.)

Fox News: “Prince Harry reveals he was close to ‘breakdown’ years after Princess Diana’s death” Grade: B+ (Good attempt at scandal and drawing the reader in.)

“If your argument against idea of w supremacy is ‘asians! [sic] Jews!’, doesn’t grapple w/slavery, you’re not someone to be taken seriously on race.” — WaPo Ferguson racial instigator Wesley Lowery.

On the other hand, this Fox News correspondent ridiculously empathizes with Eric Trump 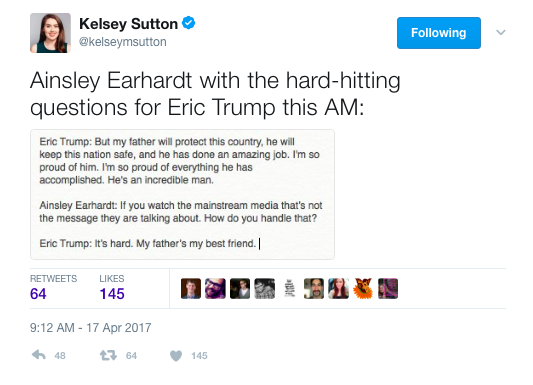 Omarosa is back in Washington 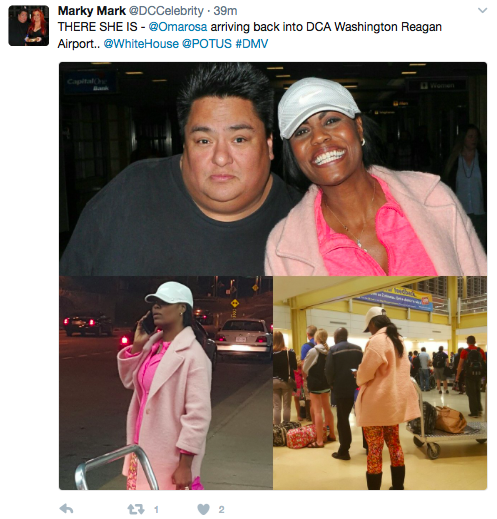 The Daily Beast‘s Asawin Suebsaeng thinks otherwise: “What if the person in the bunny suit is Biden? …Oh god it’s Alex Jones isn’t it or Don Jr.” 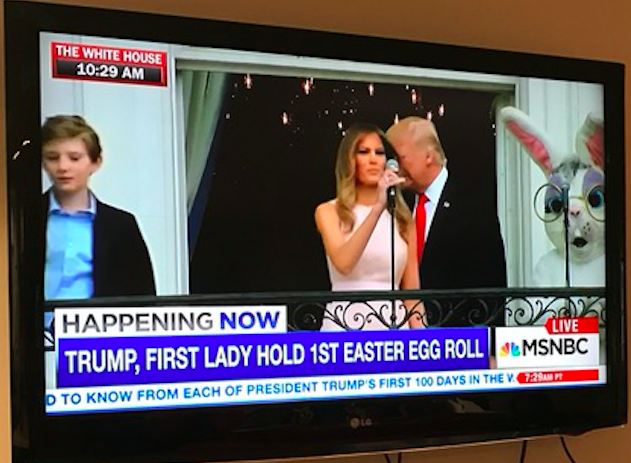