WASHINGTON — Sean Spicer held the press briefing from the White House Monday. The press secretary answered questions on how Donald Trump will deal with North Korea and why the administration ended an Obama-era policy to publicly release the White House visitor logs. 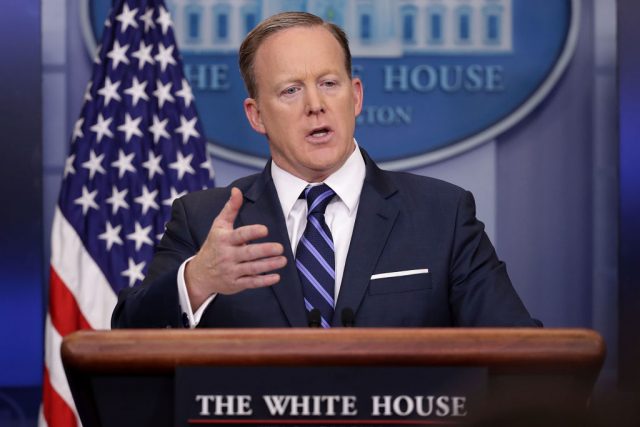 “We talked about the use of red lines in the past with respect to Syria,” Spicer said. “Drawing red lines hasn’t really worked in the past.”

“He holds his cards close to the chest. I don’t think you’re going to see the president drawing red lines the sand, but he will take action when appropriate. For us to telegraph what we are gonna do would not be a smart strategy…”

“With respect to North Korea, the president had a really good meeting with President Xi. Both politically and economically they can continue to apply pressure to achieve results there.”

“Not taking options off the table gives us a stronger hand,” he later added. “When you look at the quality of the national security team surrounding him, it’s probably the best in our nation’s history. You know the president is getting sound and strategic advice.”

“There are people who want to come have a conversation with members of the administration the same way they would do with members of Congress. We recognize there is a privacy aspect to allowing citizens to come express their views.”

“This is a policy that has existed since the beginning of time. It’s not really transparent when you scrub out the names of people that you don’t want people to know who was here.”

“I understand some days you don’t get it as quick as you want. With all due respect, he’s entitled to have moments with his family and private time. I would repesctuflly suggest we have done a good job… I get there will always be this back and forth. You guys will always want more.”

“They haven’t been manipulating their currency since he’s been in office. That’s a fact.”

On bombing Syria and Afghanistan in the last month

“People around the globe are excited the president is taking action.”

“He’s achieving a lot of results on the issues that he talked to the American people about. The executive orders he’s signing are all consistent with what he said on the campaign trail. I would argue we are going to continue to see the president achieve his goals.”

On if he will release his tax returns

“He is still under audit. The statement still stands.”