He fired back last week after The Daily Beast‘s Asawin Suebsaeng made fun of one of Lowe’s lesser known flicks.

The reporter is referring to Lowe’s starring role in Killing Kennedy (2013) which earned him an Emmy. Of course, he also got an Emmy for the 2014 Lifetime performance of Behind the Candelabra, in which he played Liberace’s plastic surgeon. At the time, Lowe said he thought he looked “almost like a transgendered Bee Gee. He’s the fourth member of the Bee Gees: the transgendered Bee Gee, the lesser known one.” The role gave him migraines.

Suebsaeng may not think much of Lowe, but Indiana’s Depauw University apparently does. He’s scheduled to visit the campus on May 1 to give a lecture and receive a medal. His parents and grandfather are grads.

Depauw doesn’t hold back on Lowe’s life. In the website’s announcement of the upcoming appearance, they discuss his 1988 sex scandal in which he slept with two young women in Atlanta — they were underage.

He has been sober ever since.

But apparently not enough to let a baiting remark from a D.C. reporter slide.

Which is apt here. In 2015, Lowe told GQ that the “greatest hurdle” in his recovery has been resentment. He says it’s the “bullet” that’ll make a person drink. 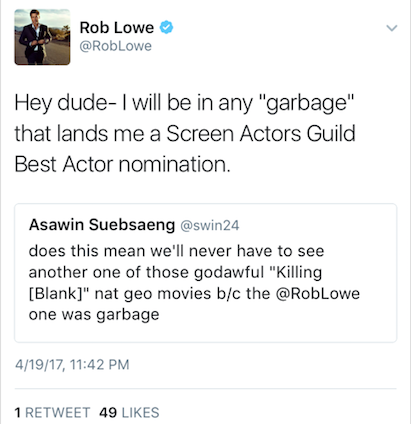 But it’s not as if Lowe abstains from politics.

In 2016, during a Comedy Central roast on the actor, he made one of the most vicious remarks to conservative commentator, Ann Coulter, who was among the roasters. ”Why is Ann Coulter here tonight?” Lowe asked. “Because the right-to-lifers wanted everyone to see what an abortion looks like up close.”

But all is not lost. Coulter’s appearance — in which she was severely skewered — prompted Glenn Thrush, now a liberal-leaning NYT reporter, to invite her onto his podcast and express sympathy for what she endured during the roast.