I recently stumbled upon the existence “Underdoges: A Pro-Donald Trump Political Comedy Film.” I haven’t seen this movie yet, but the idea of a “pro-Trump” comedy film definitely intrigues me.

A video gamer gets fired from his job so he gets into the drug and bitcoin laundering business with his best friend. Being A Donald Trump supporter, he quickly figures out rotten government officials from the “DC” swamp want him out. This great comedy covers how Donald Trump caused everyone to clash over issues such as abortion dealing and illegal immigration in our lives and American culture.

Like I said, intriguing. I don’t think of abortion dealing and illegal immigration as comical subjects, to say the least. And I barely know what bitcoin is. But perhaps I’ll give it a chance. As the poster says, “Smart people love this comedy.” (Then again, if my college experience taught me anything, it’s not to listen to so-called “smart people.”) 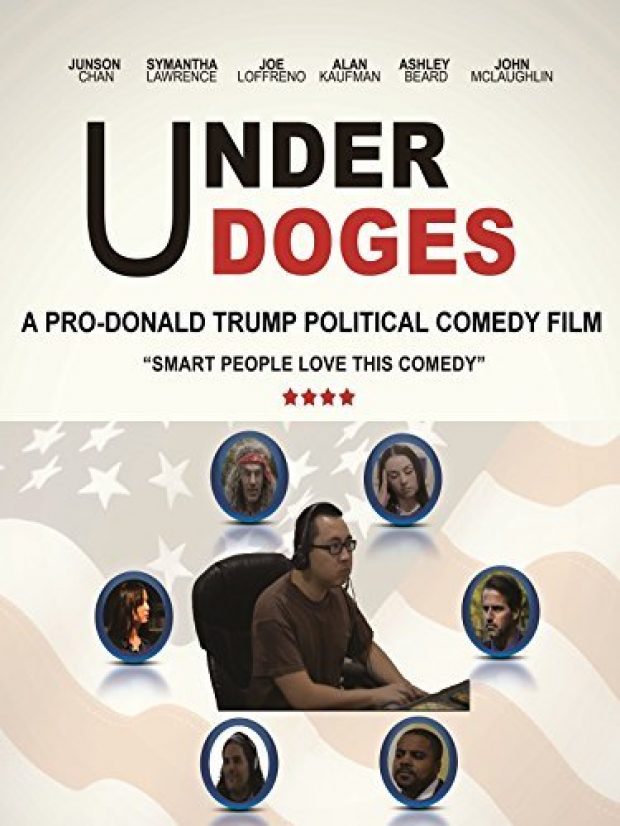 The reviews on Amazon on evenly divided. Forty-seven percent gave 5-star reviews like this one, titled “Loved it! Well written!”:

Very well written. Loved it can’t say enough! Don’t pay attention to the anti trump trolls on the left…well worth viewing.It’s sad that anti trump people leave reviews without having seen it. Typical lefties…I’m hoping and I feel this is the beginning of real comedy not derived from hate. And , more to the point …it’s funny!

The other 53 percent gave 1-star reviews like this one, titled “Poorly written and simply not funny considering this is a comedy”:

Poorly written and simply not funny considering this is a comedy. The acting is atrocious and the film lacks substance and direction. I want my 90 minutes back but instead I’ll warn any and all potential viewers: DONT WASTE YOUR TIME OR MONEY. I hope this is the first and last film by this director. He sucks and so does his horrible excuse for a movie

Here is another one, by an Amazon user who calls himself (or herself) “Resist,” and titles his review “Do NOT waste your time!”

So how good is this movie actually? The jury’s still out. I’ll give it a chance. Let us know what you think about “Underdoges: A Pro-Donald Trump Political Comedy Film.”