Some journalists are calling for CNN to drop comedian Kathy Griffin from its infamous New Year’s Eve special alongside Anderson Cooper in which she does everything she can to embarrass him and elicit his well-known giggle.

Has the comedian finally gone too far?

Griffin posed with a fake President Trump head. She dangled the bloody thing in her hand.

“Hey @andersoncooper and @CNN – why do you associate with a person who wants to behead Trump?” asked Fox News host Todd Starnes.

“It’s pretty disgusting,” he said on “The Lead” Tuesday. “I can’t imagine how anybody would think that’s appropriate.”

Tapper seemed embarrassed to say that Griffin “does work for CNN on New Year’s Eve.”

In the meantime, reporters unleashed a torrent of reaction on Twitter.

The Hill‘s media writer Joe Concha is angry and waiting on CNN management to respond.

“If you’re CNN, you announce immediately that Kathy Griffin will no longer be hosting your New Year’s Eve special right now w/o hesitation,” he wrote. “It’s not CNN. She just does an annual special, but a message has to be sent now that this cannot be tolerated. On the whole Kathy Griffin photo, please don’t let the narrative become ‘Trump supporters are outraged’ — this can’t be a partisan thing.”

Even DailyWire‘s Editor-in-Chief Ben Shapiro, who can’t stand Trump, challenged the left to condemn Griffin’s butchery. “Leftists, tell me again about Trump’s violent language ushering in an era of violence,” he wrote.

HuffPost, the left-wing news outlet, wrote about the the blood and gore like it is just a creative day in a comedian’s life.

Other journalists held off finding out what Griffin did as long as possible.

“I don’t know what Kathy Griffin did and I’m going to wait a few more precious minutes before finding out,” The Atlantic‘s Rosie Gray wrote.

Gray’s colleague, McKay Coppins, who Trump has called a “scumbag,” wasn’t on board with Griffin’s charade. “I overheard you guys talking about this so I Googled Kathy Griffin,” he wrote. “What was I thinking?”

The Atlantic‘s Editor-in-Chief Jeffrey Goldberg wants to make the whole thing go away and not cover it. “No promises, but I’m hoping to keep @TheAtlantic free of news about both Chuck Woolery and Kathy Griffin,” he wrote. (The right-wing Woolery is the former host of Love Connection. He also pushes Australian Dream lotion in commercials.)

TheBlaze‘s Tré Goins-Phillips expressed disgust. “For those who are—for some unknown reason—uncertain about @KathyGriffin, this should clear things up. Despicable.”

New York Mag‘s Yashar Ali kept his opinions out, but wrote, “Just spoke with Kathy Griffin. She said, unapologetically, that the image of her that’s gone viral is an expression of art.”

World Net Daily unfairly and preposterously blamed the whole thing on the “lefty” media. “The political left has lost any marbles it still had,” the right-wing site tweed.

Breitbart News directed its angst to Griffin and remarked, “You seem well-adjusted.”

VICE‘s staff politics writer Eve Peyser is already over it.

“I’m already exhausted by the amount of disingenuous moral outrage this will drum up,” she wrote.

Some journalists are outraged by the double standard but weren’t affected by an image of the president being decapitated.

Lefty sites such as ThinkProgress, BuzzFeed and Media Matters had no report on Griffin’s violent artwork as of this writing.

So far the White House Press Office has no formal response.

But suffice it to say they’re not pleased.

Just in case you haven’t seen it, here it is: 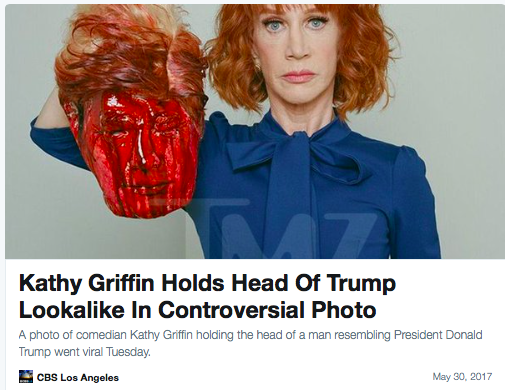