Former FBI Director James Comey in his Senate testimony Thursday accused President Donald Trump of giving him a “directive” to letting former Director of National Intelligence Michael Flynn go free from investigation. It was a major part of the reason Comey and Democrats hoped a special counsel would be appointed in the case, and one was. But that special counsel, former FBI Director Robert Mueller, was accused of doing exactly the same thing in a 2011 book in regards to the deaths of the Branch Davidians at Waco, Texas.

According to former Georgia Congressman Bob Barr, now special counsel Mueller said nearly the same thing to him during the 1995 Congressional investigation into the 1993 stand-off in Waco, Texas that resulted in the deaths of 76 members of the Branch Davidian cult.

Barr, writing in his 2011 book, “The Meaning of Is: The Squandered Impeachment and Wasted Legacy of William Jefferson Clinton,” recounted a phone call with Mueller, who was then working at the Justice Department, in which he asked Barr not to “go too hard on these guys.” 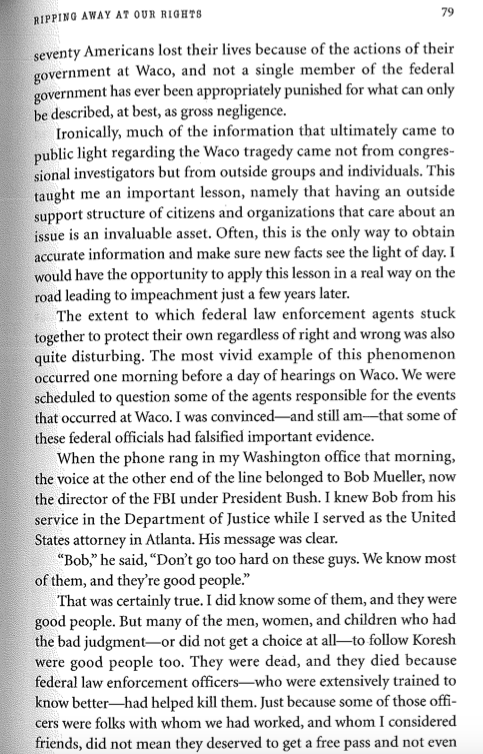 Scan of “The Meaning Of Is.”

Scan of “The Meaning Of Is.”

Barr recounts Mueller as saying, “Bob, don’t go too hard on these guys. We know most of them, and they’re good people.”

It went unnoticed at the time, as Mueller was out of government service when the book was written.