A Democratic Maryland gubernatorial candidate spoke out on MSNBC Tuesday on the rumors swirling around President Trump potentially firing Robert Mueller as special counsel on Russian interference in the 2016 U.S. presidential election.

But sometimes a guest goes a tad too far for host Stephanie Ruhle, who seemed mildly disgusted with at least part of what Alec Ross had to say. Ross was Senior Advisor for Innovation to Sec. of State Hillary Clinton. He’s vying for the seat that will be in play when Republican Gov. Larry Hogan runs for reelection in 2018.

“I think we’re in full-on Banana Republic mode right now,” the 45-year-old candidate said. “I think President Trump has already crossed the line multiple times, in terms of who he’s willing to fire, what he’s willing to do. So what do you when you’re on your back foot when your approval rating is getting to the low 30s, re-embrace the bra, re-embrace the base. And that is what Ann Coulter and Rush Limbaugh and all these other lunatics do, is they fire up that 30-35 percent. Which also has the effect of scaring mainstream Republicans in Congress in keeping them from pushing too hard against Trump.” 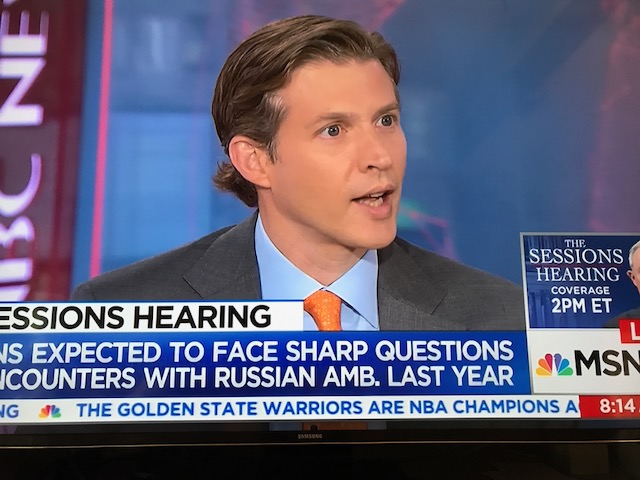 Ross then went down a dark and dirty road.

“For all the outrage that be caused by firing Bob Mueller, I actually don’t the Republican Congress would do much,” he said. “I don’t think they’re going to do much of anything unless Trump gets caught in bed with a live boy or a dead girl.”

“Ok that’s also a little much for 9 a.m. in the morning,” she said and quickly moved on from Ross.

Earlier in the segment, Ross raised the issue of flushing a toilet and even used his fingers to make a flushing motion. When that happened, Ruhle went straight to commercial.