A high-level employee at the Federal Communications Commission (FCC) in 2014 appeared to give leaders of liberal-leaning groups preferential treatment for posting and publicizing comments on the agency’s public forum for the net neutrality debate.

Details of the highly friendly support were first described by then-The Washington Post’s Nancy Scola, who referred to it as an “unusual collaboration” in an in-depth report on the FCC’s filing system. Those details became significantly more incriminating after Mike Wendy, director of the market-oriented nonprofit MediaFreedom, recently received once-classified pieces of electronic communications years after he filed a Freedom of Information Act (FOIA) request. Wendy alleges that, along with other conservative organizations, they were not given the same effortful and enthusiastic treatment their liberal counterparts received.

The FCC hosted a period in 2014 where anyone could submit feedback on so-called net neutrality, a nebulous term loosely defined as the principle that internet service providers have no right to discriminate against certain forms of traffic (like spam), nor to offer faster speeds to higher-paying customers. For supporters (usually liberal), it means all traffic receives equal treatment. For critics (usually conservative), net neutrality is a government takeover that prevents companies from investing in faster infrastructure. The FCC at the time invited people to publish their thoughts about net neutrality on the public filing system in an attempt to have the rule-making process for internet regulation as democratic as possible. But how democratic and equal that process was can now be called into question.

“Our biggest focus right now is making sure everyone’s comments get submitted and counted,” Holmes Wilson, presumably the same person who is the co-founder of Fight for the Future, wrote in an email to at least three other people who worked for the agency in some respect.

“Thanks so much to all of you for your efforts,” Sohn wrote. “We’ll do our best and keep our fingers crossed too! I’ll be out of town tomorrow, but will be checking emails,and (sic) David and Sagar will be at your service.”

“Just a note that we’ve got 500k or so more comments that were held up by server issues today. It would be great if you could pass press on to us for the real number,” Wilson said in an email.

“Can you tweet from @fcc early today, something like: ‘The FCC server has had problems with the large number of comments, so the number on the docket website is not the official number. We’ll have an official number soon,” Wilson asked in a separate email dated September 11th, 2014, at around 10:26 a.m. (Eastern Standard Time).

Not long after, the government agency obliged.

Marvin Ammori, a board member for Fight for The Future and Demand Progress, and David Segal, an active liberal political activist, also appeared to closely collaborate with Sohn, as evident in the emails Wendy obtained and published. (RELATED: Net Neutrality Activists Tied To Violent Groups, Convicted Al-Qaida Terrorist) 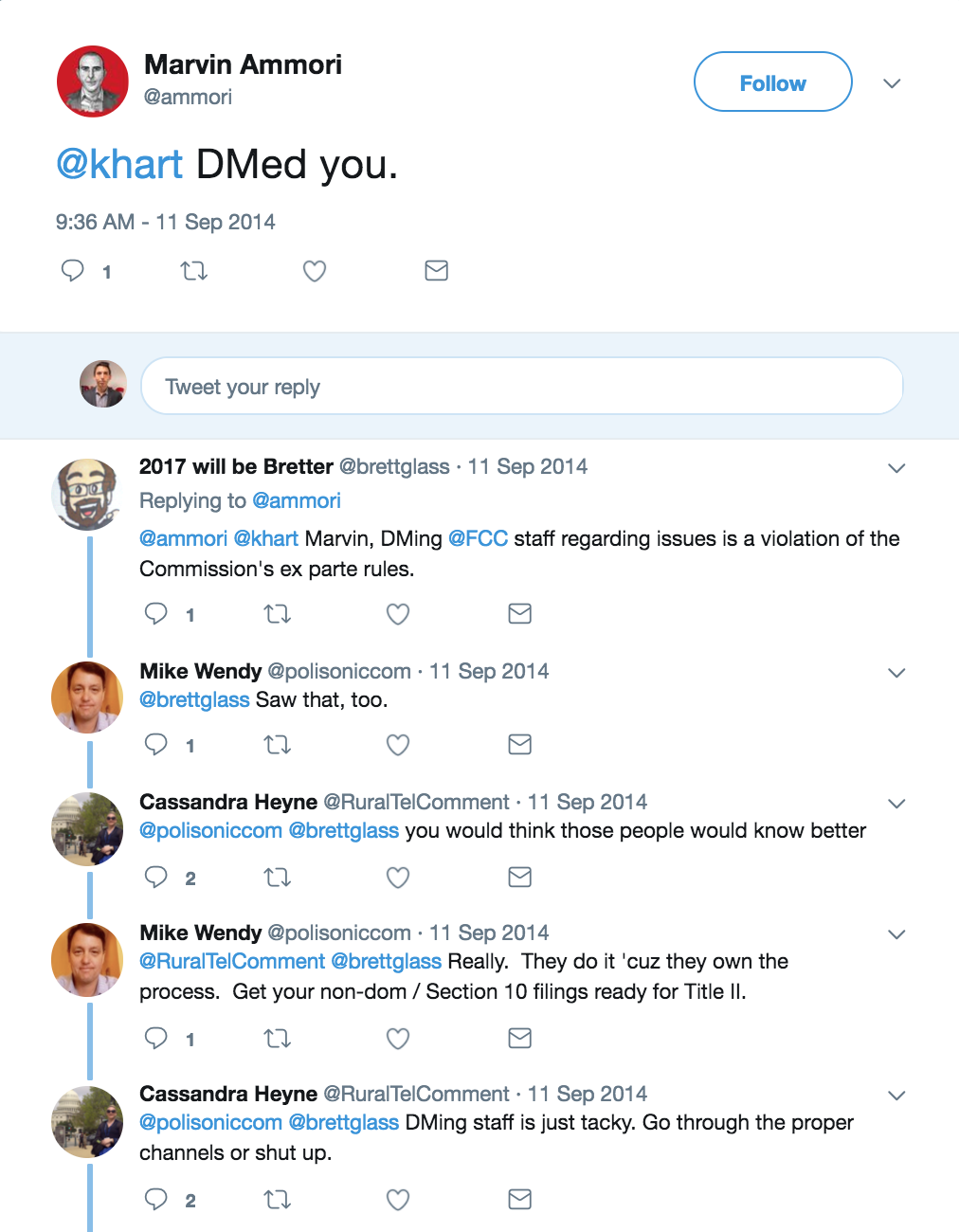 (Screenshot of a tweet from Marvin Ammori, including Wendy and others’ replies)

“I was very surprised that they agreed to take an outside group’s comment count or request to promote the number of comments coming in via social media,” Katie McAuliffe, federal affairs manager at Americans for Tax Reform, told The Daily Caller News Foundation. “I would never have asked or expected to receive special treatment on comment counts, particularly having the FCC post a tweet drafted for them.”

Aside from the ease with which the FCC agreed to say almost exactly what the liberal groups wanted to be said, providing assistance — even to the great extent FCC officials gave — is not a problem in itself. But leaders of other right leaning organizations, like Wendy and Phil Kerpen of the advocacy group American Commitment, said they were barely even able to get their foot in the door.

“When our side decided to engage in the ‘clicktivism’ battle, we tried to sort of use the same tactics to drive massive public comments,” Kerpen told TheDCNF. But because the FCC’s public filing system was so antiquated — as Scola and others including people at the FCC have corroborated to TheDCNF — comments supporting both sides of the debate were not able to make it to the platform for all to see.

“Our team got some help from low-level FCC employees who kind of answered the phone the way anyone just calling in would,” Kerpen explained. “But we certainly didn’t get any kind of high-level assistance from high-level staffers managing media requests and helping to shape a narrative.”

Wendy can attest to Kerpen’s frustrations. He says he contemporaneously wrote respective, but similar letters to the FCC inspector general and Wheeler to investigate the facts around Scola’s story. After several failed attempts to get a sufficient response to his inquiries for more information, he continued re-crafting his FOIA appeal. Wendy says the FOIA officer he was working with was helpful. He blames the FCC Office of the Inspector General for being difficult and purposefully withholding the information from him in spite of physically visiting its headquarters at one point.

Kerpen believes that the level of service and assistance was “completely one-sided” because the FCC wanted to “help them reach the predetermined outcome of their process.”

What upsets Kerpen and Wendy even more is that the FCC isn’t supposed to be political. Rather, it is to be an independent expert agency that makes decisions based on data, facts, economics and the law. Since specific staff members at the FCC, like Sohn, essentially bent over backwards to help one side but failed to help others with different political views, they believe the agency rendered itself partial and subservient.

While the “unusual collaboration” occurred roughly three years ago, it quite aptly applies to happenings related to the contemporary FCC. The same exact battle for which one side of the debate has the most comments is currently a hot-button issue (even though the degree to which it will ultimately affect policy is dubious). When the newly-led FCC opened a new forum for public comments months ago, like clockwork, a measuring competition started again. Both far-left advocacy groups and conservative organizations are clamoring over who has more comments supporting their arguments in order to boast about who has the public behind them.

In 2014 at least, its fairly clear that regardless of who actually garnered more comments in their favor, the FCC only helped one side, the liberals.

The DCNF reached out to Wilson, Sohn, Ammori, Segal and others mentioned or involved in the disclosed emails for comment, but they did not respond.