A Chattanooga, Tennessee, home intruder got more than he bargained for when the two victims of the invasion fought back.

Calvin Carter III knocked on an apartment door Saturday night and demanded the residents let him in, reports WRCB.

One victim said he thought he heard Carter racking a gun through the door, and opted to jump out of the apartment’s back window. However, Carter discovered the victim and forced him at gunpoint to reenter the building. 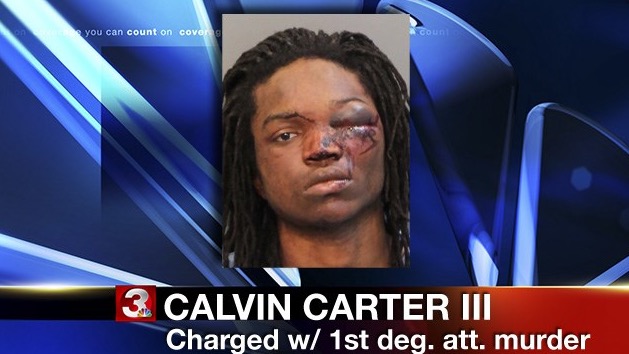 That’s when things got a little sticky for Carter.

Carter demanded the victim hand over his cellphone, but during the exchange both victims jumped him, disarmed him and held him down until police arrived.

Carter was charged with first-degree attempted murder, especially aggravated burglary, reckless endangerment and three counts of aggravated assault. His bond was set for $245,000.

A photo of Carter from the arrest shows him with a severely swollen eye and cuts and blood on his face.