Officials at the University of Missouri’s flagship campus in Columbia appear to have decided to rid themselves of Janna Basler, the taxpayer-funded administrator who joined a mob of Black Lives Matter protesters in November 2015 and shoved a lone student photographer as he attempted to capture images for a local newspaper.

Mizzou officials are currently implementing a round of massive budget cuts and approximately 400 layoffs in the face of a projected 7.4 percent plunge in student enrollment and a $14.7 million state funding cut.

Basler’s name, photo and contact information no longer appear among the staff members in the student life section of the public school’s website.

A cached version of the same webpage from late June 2017 shows Basler — Dr. Janna Basler — listed first and foremost among Mizzou’s student life staffers. Basler had been the assistant director for Greek life at the time of the protests. (After getting suspended for over a month for her actions in 2015, she managed an impressive promotion to senior associate director for Greek life.)

On Thursday, Mizzou’s top brass announced a merger of its department of students of affairs and its division of operations as part of a larger plan to cope with new budget realities. (RELATED: Mizzou Hemorrhages More Students And Cuts Jobs Because Of Black Lives Matter Protests)

A new organization chart now lists Basler’s job duties under the duties of a new dean of students who will supervise residence halls, Greek life and student conduct, reports the Columbia Missourian.

Basler was one of two taxpayer-funded University of Missouri employees who physically and verbally attacked student journalists during the eruption of Black Lives Matter protests that rocked the school’s campus in the fall of 2015.

The protests by a group called Concerned Student 1950 centered largely on Jonathan Butler, the son of a millionaire railroad executive. Butler went on a hunger strike and convinced 32 black Mizzou football players to boycott all team activities. 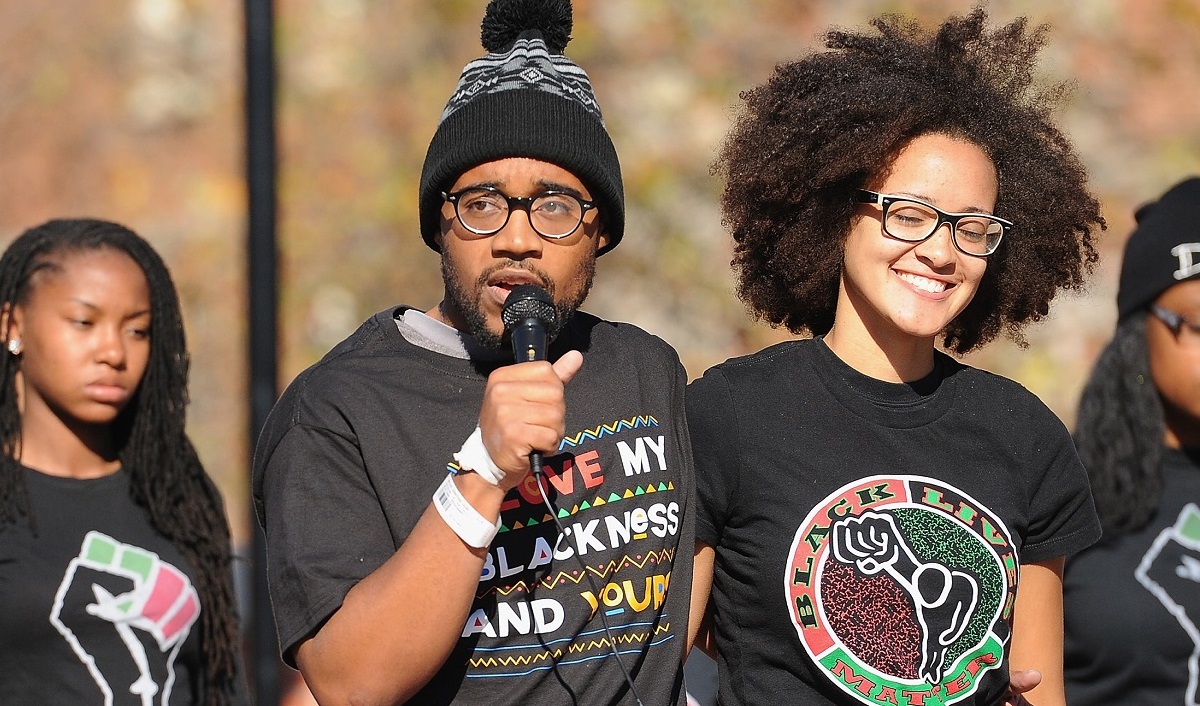 There was also a poop swastika.

Basler was loitering among the mob of student protesters when she yelled at and shoved Tim Tai, a Mizzou student and a photographer working for a local press outlet. (RELATED: Mizzou Greek Life Director Shoves Student Photographer During Mob Protest)

The taxpayer-funded administrator refused to identify herself when Tai asked her if she worked for the school’s Greek life office.

Tai was surrounded by a student mob. Basler shoved up against him.

Basler’s star turn begins just before the three-minute mark in the video below.

“Sir, sir, I am sorry. These are people too. You have to back off! You know, back off from my personal space. Back off! Leave these students alone,” Basler said, as she shoved Tai with her body.

The crowd grew. The students among them began to heckle Tai. One female student — that Basler was blocking — also shouted at Tai.

“Well, you know what? She gets to decide if she wants to talk to you or not,” Basler told Tai, who was interviewing no one.

Again, Tai asked Basler not to push him, but Basler accused Tai of pushing her.

“You’re with the office of Greek Life?” Tai asked her incredulously.

The students continued to heckle Tai, asking why he had to take their photos.

“But, sir, there are more students that are asking you to leave,” Basler said.

Following the upload of the video, Tai received support from journalists and the public alike. He later tweeted” “Wow. Didn’t mean to become part of the story. Just trying to do my job. Thanks everyone for the support.”

A now-fired professor, Melissa Click, also threatened a student cameraman with mob violence when he tried to cover the same ongoing protests.

Emails from the University of Missouri’s computer network obtained by HeatStreet show that the activists who led the protests demanded generators and a fire pit to keep themselves warm and cozy as they camped out in tents on the campus quad during chilly November nights. School officials helpfully provided additional electricity. (RELATED: Mizzou Black Activists Demanded A TOASTY FIRE PIT As They Protested Poop Swastika)

Protesters accused then-Mizzou president Timothy Wolfe of not doing enough to address racial tensions on campus. After the football players announced their strike (which lasted all of one practice), Wolfe resigned and the school caved to a host of other protester demands.

Basler has not responded to inquiries by local reporters about her job status.

Her position is totally gone, so to me the question is if a profile for her reappears somewhere else.

for sure, no confirmation yet about her employment or lack thereof. But this is usually a pretty clear first sign.

Mizzou officials are consolidating a host of other administrative positions. They say they expect the layoffs and the overall reorganization effort to trim about $1.5 million from the school’s budget, according to local ABC affiliate KMIZ.

This summer’s round of layoffs will include a vice chancellor, one senior director, three directors of various programs and a few other administrators, according to the Columbia Missourian.

“We’re hoping that students who come to Mizzou will come here and have the continued strong experience, and we hope an improved experience with activities outside the classroom,” Mizzou spokesman Christian Basi told KMIZ.

Applications to Mizzou for this academic year were way, way down. The school lost a staggering 23 percent of its freshman class. To contain costs and to reflect its shrinking population, school officials shuttered several dormitories. (RELATED: SURPRISE! Mizzou Sees Application Drop After Days Of Protests, Illusory Klan Hoods, Poop Swastika)