Freelance journalist Lauren Southern, formerly of Canadian media organization The Rebel, has made a reputation for herself online and offline by openly expressing politically incorrect views on social media, as well as in her reporting.

This week, the crowdfunding site Patreon banned Southern’s account over claims her work would get people killed.

Southern is no stranger to controversy, and has been physically attacked in public for making statements like “there are only two genders” and stalked during her coverage of the G20 2017 riots in Hamburg.

Since departing The Rebel in March 2017, the right-wing journalist took to Patreon to crowdfund her work, which has revolved around the rise of anarchist movements in North America and the refugee crisis in Europe.

In the middle of all this, she lost one of her primary avenues for continuing her work.

“Patreon just deleted my account,” Southern announced on Twitter Thursday. The Daily Caller reached out to Southern to discover why the platform terminated her source of income.

“They claimed I’m raising money that will get people killed,” says Southern, who showed TheDC the email Patreon sent her. She added that the company is refusing to even consider an appeal. 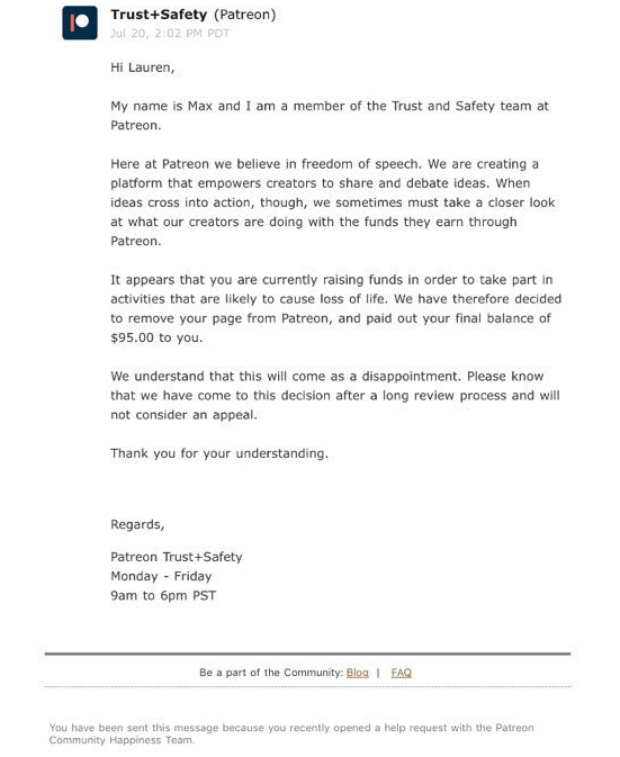 According to Patreon’s Trust+Safety team, the platform says that they took a “closer look” at her account and found that it “appears” she was raising funds “in order to take part in activities that are likely to cause loss of life.”

“We have therefore decided to remove your page from Patreon, and paid out your final balance of $95.00 to you,” the letter continued. “We understand that this will come as a disappointment. Please know that we have come to this decision after a long review process and will not consider an appeal.”

Patreon currently hosts a crowdfunding page for the Antifa website It’s Going Down, which earns over $1,100 a month despite openly promoting violence towards police officers and “capitalists.”

When the issue was previously brought to public attention, one of the site’s employees, Aaron Riggenberg, stated that he saw no problem with a site because it “looks like a great group with a good mission statement.” He further stated the necessity in “active anti-fascist groups in the age of Trump.”

Southern rejects Patreon’s reasoning, and explained that her work on the Defend Europe ship is unrelated to any of her earnings from the site. The ship was chartered by anti-immigration activists to aid the Libyan coast guard in pushing back refugee boats to its shores, where they set off to Europe and sometimes capsize along the way.

“If the review process was so long and so thorough I’m wondering how they missed the small fact that 1. I am not partaking in the mission and had stated that on both my Patreon and YouTube. 2. Not a single dime I made from Patreon or any other platform was going towards the Defend Europe mission and 3. there is absolutely no intent to put lives at risk on this mission even if I were fundraising or taking part in it,” says Southern.

“The only reason Patreon is doing this is because a radical leftist organization that have been spreading fake news about the mission in order to put the crew in harms way lobbied them for ages,” she continued. “They are appealing to liars rather than defending their alleged dedication to freedom of speech.”

Senior members of Hope Not Hate, one of the organizations involved in facilitating the influx of refugees into Europe, openly bragged about causing Lauren Southern’s Patreon suspension.

Posting on Twitter, Hope Not Hate founder Nick Lowles and senior researcher Joe Mulhall stated that the organization lobbied the platform to ban her account.

“I think it’s shocking that anyone would accuse me of wanting to kill people,” says Southern. “It’s even more shocking that I have to defend claims like that from a supposedly neutral organization Patreon.”