DOJ lawyers have continued to keep alive a slew of cases appealing a 2014 district court ruling that granted an injunction from the mandate to several Catholic organizations. The Supreme Court vacated an appeals court ruling against The Little Sisters of the Poor and similar organizations in 2016, sending the cases back to the lower courts. Many religious freedom advocates expected that the Trump administration, which has vowed to protect The Little Sisters and other organizations burdened by the contraceptive mandate, would drop the legal campaign against the religious organizations. But more than six months into the Trump era, the legal fights are still alive.

President Trump signed an executive order in early May, directing the Secretaries of Health and Human Services, Labor and Treasury to “consider issuing amended regulations, consistent with applicable law, to address conscience-based objections to the preventive-care mandate” in Obamacare. HHS Secretary Tom Price said the executive order would allow the HHS to “safeguard the deeply held religious beliefs of Americans who provide health insurance to their employees.”

Later that month, a draft Department of Health and Human Services (HHS) rule was leaked to the media. Religious liberty advocates praised the draft rule, which — if implemented — would carve out religious liberty protections for the Little Sisters and other organizations. Under the draft rule, the government would still make sure women’s birth control is covered by insurance — as required by Obamacare — but without compelling religious objectors to take part in the process.

The draft rule, which was dated May 23, said that the a lack of accommodation would likely violate the 1994 Religious Freedom Restoration Act, under which the Little Sisters and other organizations are bringing their challenges. The law requires the federal government to have a compelling government interest and use the least restrictive means possible if when infringing upon religious believers with a neutral law of general applicability. Reporting at the time the rule was leaked said that it had been sent to to the Office of Management and Budget (OMB) to be reviewed before publishing.

But more than two months after the agencies drafted the rule, they have yet to actually publish or promulgate any such rule. DOJ lawyers are using the lack of action to extend their years-long legal battles with religious objectors to the mandate. DOJ lawyers have asked for — and received — repeated 60-day extensions from the 10th Circuit, court filings show. 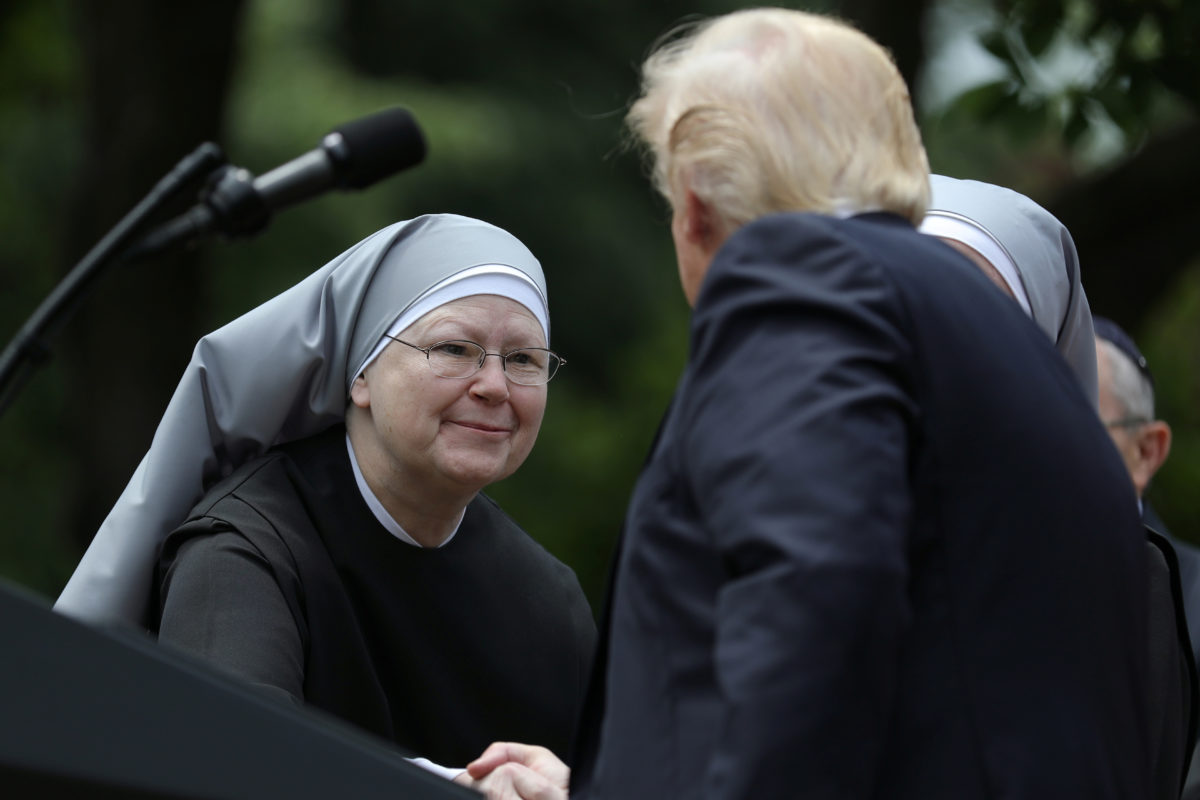 U.S. President Donald Trump shakes hands with a nun of the Little Sisters of The Poor during a National Day of Prayer event at the Rose Garden of the White House in Washington D.C., U.S., May 4, 2017. (REUTERS/Carlos Barria)

Frustrated by the lack of progress, attorneys handling two similar challenges to the mandate — one on behalf of several Catholic groups and the other on behalf of Dr. James Dobson, founder of the evangelical group Focus On The Family — filed motions to dismiss the case in the 10th Circuit on Friday. The DOJ has until July 31 to file their response, which should provide insight into why the department has continued dragging out the court process. The motion to dismiss followed yet another DOJ extension request. A DOJ spokeswoman declined to offer comment on the ongoing court battles.

Attorneys for the Catholic organizations and Dobson pointed out the contradiction in the administration’s private positions on the mandate — as reflected in the draft rule — and the DOJ’s legal actions.

“Recently, the Departments revisited their mandate and concluded that ‘applying the contraceptive coverage requirement’ to such ministries ‘would violate [the Religious Freedom Restoration Act].’ But while the Departments now agree with the district court’s RFRA analysis, the Department of Justice continues to seek continuances from this Court,” they argued in Friday’s motions.

One of Dobson’s attorneys, Gregory Baylor with the Alliance Defending Freedom, expressed frustration that religious groups remain stuck in limbo.

“We don’t know when the agencies are going to actually issue the rule,” he said. “We don’t know if it will be issued without changes. He suggested that the motion to dismiss filed on Friday could force the administration to move forward with protecting conscientious objectors to the law.

“We think they want to maintain the status quo in the courts while the administration communicates internally about what it wants to do and our view on that is they’ve had a significant amount of time to do that,” Baylor added. “They’ve had six months since the beginning of Donald Trump’s presidency, they’ve had eight months since the election. And I understand their desire to figure out how they want to deal with these cases, but at some point it does become necessary for them to take action, and we think that time is now.”