Axios frontman Jonathan Swan is the byline on a new piece that suggests National Security Adviser H.R. McMaster may be on the sauce.

Just to be clear: writing that someone has a drinking problem is a serious allegation.

So here’s how Axios handled it: 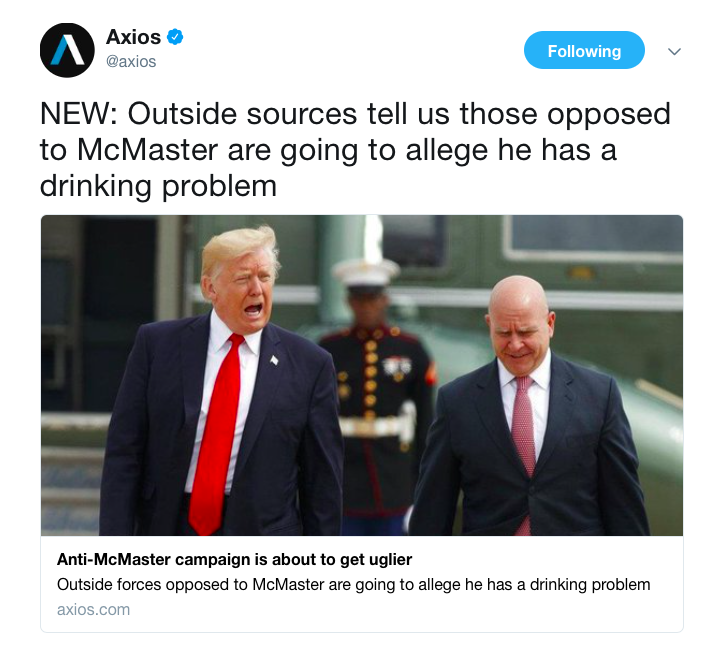 “Outside forces opposed to McMaster are going to allege he has a drinking problem, according to sources outside the Trump administration familiar with the anti-McMaster campaign. The controversial nationalist Mike Cernovich, who has an inside track on the anti-McMaster campaign, teased the alcohol attack in an Internet video with Alex Jones of the website Infowars. Anti-McMaster forces believe this attack will harm his standing with the president, who is a teetotaler.”

Swan wants readers to be clear about his serious lack of clarity on the matter.

“I have never heard anything to support the allegation from anyone inside the Trump administration or from anyone who’s socialized with McMaster,” he wrote. “We are covering it to highlight the extremes to which McMaster’s opponents are prepared to take their war against the National Security Adviser.”

The reporter uses three anonymous sources to dismiss the rumors swirling around McMaster.

Swan goes on to say that lots of his sources believe that President Trump‘s Chief Strategist Steve Bannon is behind the drunken rumors, which is noteworthy considering the number of Breitbart sources who have suggested to The Mirror over the years that Bannon may have some substance issues of his own.

Swan uses “Bannon associates” to deny that Bannon’s fingerprints are on the McMaster rumors.

On Sunday night, while some on Journo Twitter were irate with Axios, others think Bannon has the problem.

Seung Min Kim is a Senate reporter at Politico.

Staci Kramer, who writes about media for Trust But Verify, said that Swan’s clarification “needs to be clearer in your promotion and higher up in story.”

Paula Shatsky, a “clinical art therapist” in Pasadena, says Bannon — if he’s the leaker — is one to talk. And yes, I checked. She really is listed as a licensed clinical art, family and marriage therapist in Pasadena.

But then again Shatsky sounds like she may be drinking tonight.

She followed that up with, “Meant Brannon not Gannon.”

Whoever the real drunk is or is not, Trump loyalist Roger Stone is not a Bannon enthusiast.