MY LIVING ROOM SOFA – I’m a little delayed because I was busy celebrating Labor Day and not watching CNN’s “Reliable Sources” with my favorite host Brian Stelter. My apologies for putting biking along the canal above Brian. But I assure you, you weren’t missing anything you don’t need to know until now.

So let’s get started.

On Sunday’s program, Stelter — who has clearly been stress eating — welcomed viewers to the show with a clip of a giddy older female Asian woman in a Pepto Bismol pink frock announcing that North Korea had successfully tested a hydrogen bomb.

Live from Tokyo, CNN International Correspondent Will Ripley explained that the woman in pink is a well-known news reader. He said North Koreans clapped when they heard the news – perhaps, he explains, because they were required to by law.

Ripley says there has been no footage of the bomb. But seismologists have detected an earthquake, verifying the explosion.

What, no spanking for President Trump?

Oh, wait…here we go. Brian is talking about the President’s “news diet” and says it may be changing since his aide and bestie Omarosa Manigault can no longer wander into the Oval and stir shit up anytime she pleases.

According to The Daily Beast, Trump asked, “Where’d The Daily Caller go? Where’s Breitbart?” (I didn’t plan to give my own pub a shout-out today, but why sometimes this stuff happen?)

The first panel is up. There’s Sarah Westwood, White House correspondent for The Washington Examiner, Alice Stewart, whose hair looks TV chic after being chopped to shoulder-length with a side-swept bang, and Errol Louis, a CNN political commentator. Louis is looking pretty stylish in a beige blazer, bright cream tie and blue and white pinstriped shirt.

Stelter mocked White House Press Secretary Sarah Huckabee Sanders with a montage of her responding over and over with a lame reply of “We’ll get back to you” and obviously not getting back to the reporter.

Stewart comes to her defense, explaining that she can’t get out in front of a White House announcement.

“The real communications director is sitting in the Oval Office,” says Lewis.

Stelter says Sanders wants a plausible denial because she doesn’t ask Trump what she’s being asked.

“I think what you’re seeing from Sarah is an abundance of caution, which we did not see before,” says Westwood explaining that the press shop is reluctant to say something that will later be contradicted by the President.

All in all, a competent, professional, well-groomed panel.

Next up: Texas flood coverage. Stelty shows a clip of CNN journos jumping in and saving victims. But Stelter is actually fair and throws in a CBS crew and The Weather Channel, which also came to the rescue during flood coverage.

Trump, however, had a “media critique he just couldn’t resist,” Stelter explained.

Will Bunch, a grizzled columnist from the Philadephia Inquirer/Philadelphia Daily News, is on the show. He’s bearded, has no tie and looks mildly unshowered.

“I’ve been a journalist for a long time,” he says. “…I think the point that needs to be made here is journalists are human …and for the most part have an instinct to help people.”

Bunch called Trump’s hatred for the media “pathological.” He says Trump hating on the media helps glue his base together.

To his credit, Stelter plays the incredibly uncomfortable Rosa Flores clip in which the flood victim disembowels the CNN correspondent for putting the microphone in her face while her kids are “shivering cold.” The woman’s biggest gripe was journalists interviewing them at their worst.

“Ya’all sitting there with cameras asking us what the fuck is wrong with us,” the woman yells at her. “…My kid’s wet and you still putting the camera in my face.” (The bad words bleeped out, but it was still clear what she said.)

Stelter opines, “I found it heart wrenching as a viewer.”

Actor and filmmaker Harry Shearer – the voice of some of your favorite Simpsons characters — is up next. He’s going to compare Tropical Storm Harvey to 12-year-old Hurricane Katrina. I’m thinking a good Sunday morning snooze would be nice right about now.

Ladies and gentleman, I’m pleased to tell you that we’re at the halfway mark.

Stelter begins by asking Shearer an incredibly dumb question. He wants to know if the media will behave like it did with Katrina — wall to wall saturated coverage and then a sharp drop-off.

“We don’t know if it’s going to taper off in the case of Harvey,” says Shearer, logically.

Shearer replies, “Well there’s a thing as you know in your business, cable television, called wallpapering where old footage will be shown so that you don’t have to see a talking head full screen.”

Stelter states the obvious: “When the storm is over, the real story is just beginning.”

Shearer agrees and mentions mold and toxic substances in the water.

Now we have Steter’s essay. Joy!

Just as Stelter routinely punches Trump in the gut each week, this week he saved room for a large, bloody bite out of Fox News.

Stelter dings Fox News host Tucker Carlson for saying that the Russia-Trump news had all but disappeared.

“See?” Stelter asks rhetorically. “It’s Russia in the past tense. There’s no Mueller investigation. There’s nothing to see here,” Stelter says. “..The message from these Fox shows is people are out to get Trump no matter what.”

Stelter goofed and called the Fox News show “Trump & Friends” instead of “Fox & Friends.” He says the former would be a fitting name.

“They’re not curious,” he says. “They don’t want questions answered about what really happened.”

You want a character debate, Brian? You better stick with me, ’cause Tucker Carlson and Sydney Ellen Wade are way out of your league. (Points to whoever figures out this movie reference.) 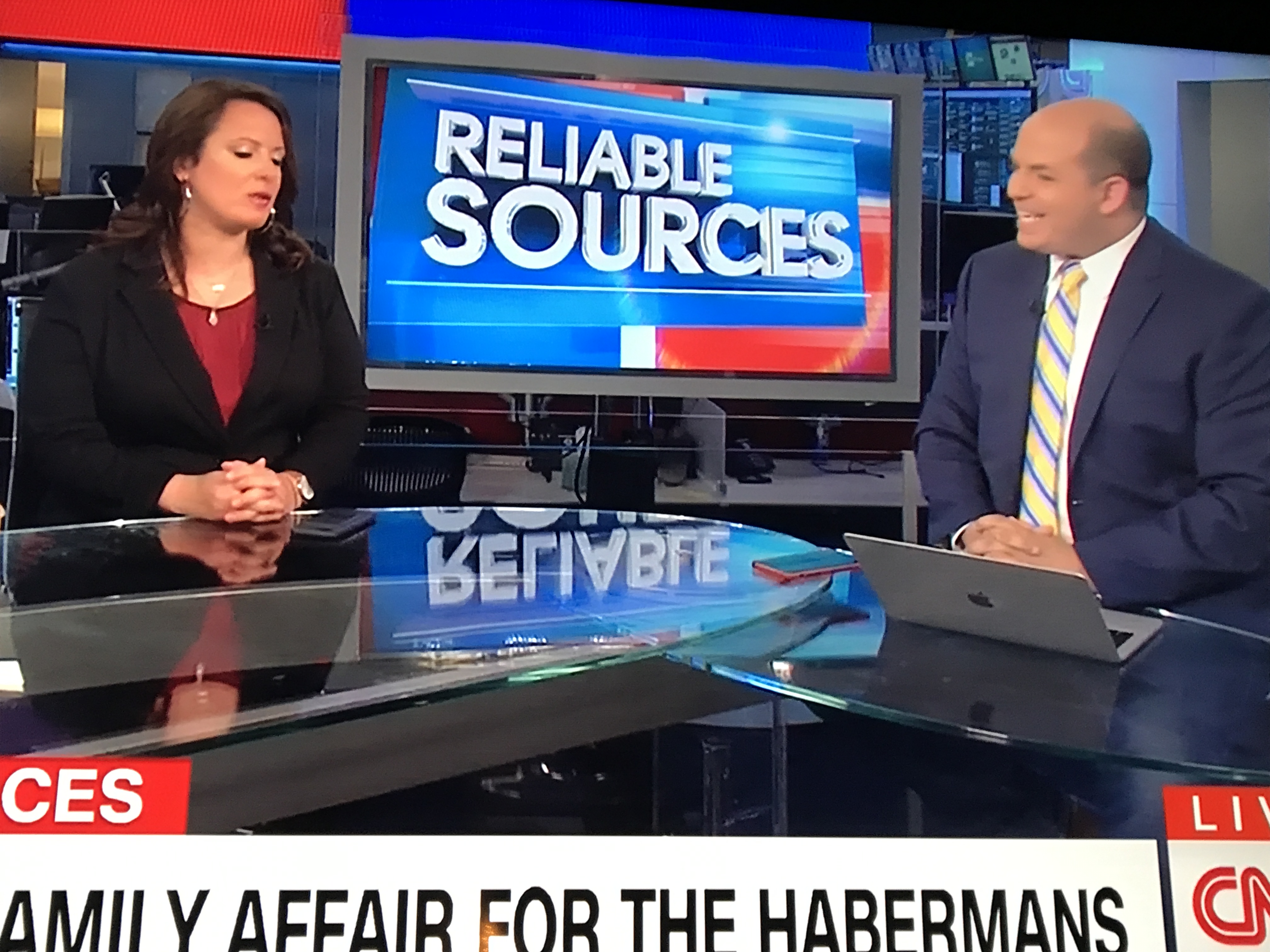 Up next is “Reliable Sources” with a touching element – it’s NYT hot rod reporter Maggie Haberman and her father, Clyde Haberman, sharing a NYT front page.

“Hah hah hah,” Stelter chuckles with anticipation about the segment.

Stelter is salivating over the Habermans, a family of journalists.

“What did you learn growing up from Clyde?” he asks Maggie, whose wearing pretty eye shadow. The media workhorse often goes on TV sans makeup.

“He was very heavily focused on the story always,” says Maggie. “When he was here he was the City Hall Bureau Chief.”

“I didn’t actually want to be a journalist,” she says. “I wanted to be in magazines. So I started as a clerk at the New York Post and I pretty much fell in love with it on the spot. I met my husband at the Post.”

Stelter asks, “Who is the better journalist here?”

“What an unfair question,” says Clyde.

“Come on, he is,” Maggie says quickly.

Clyde then goes on and on about his daughter.

“If you read her, the fairness is the most important thing,” he says. “I know she’s a woman with opinions but you’re not going to discern them very easily.”

Stelter wraps up the show by showing a scene of Trump and first lady Melania at St. John’s Episcopal Church across from a Washington park near the White House.

Have comments about Stelter’s show — positive or shitty? Write me about it at Betsy@DailyCaller.com or tweet me at @betsyscribeindc.