Last week, I sat with my family at a fancy restaurant in D.C. We were downtown to celebrate my daughter’s birthday, but the subject of our attention shifted dramatically when the glass doors flung open and Louise Linton, actress wife of Treasury Secretary Steve Mnuchin, strutted into the dining room.

My wife and daughters couldn’t stop talking about it. Imagine a runway walk from a fashion show blended with a North Korean military march, and you’re halfway to the spectacle she caused. She was followed by her husband, their kids, and a contingent of armed guards.

Next came Secretary of Commerce Wilbur Ross and his family. They made a much more subdued, even polite, entrance, but by the time they joined, armed guards were scattered throughout the restaurant. Several armored Suburbans were stacked up on the street outside.

It’s a sight Washingtonians have grown increasingly accustomed to.

Why do billionaires such as these strive so hard to get appointed to senior government positions? Ideally, there’s a real desire to serve their country mixed in — it’s something I’ve seen myself — but it isn’t entirely cynical to wonder if the trappings of power are a good part of the draw. You can make as much money as Bill Gates, but only the heads of government get those blacked-out Suburbans with gun-toting law enforcement officers authorized to hit the flashing lights and blow through traffic. It must be intoxicating. It’s also deeply un-American and against the “drain the swamp” promise of President Donald Trump’s campaign.

To drive home this point, and to remedy what seems to be the most glaring violation of the public trust, President Trump should fire Health and Human Services Secretary Tom Price. Secretary Price may be a great guy; he’s certainly someone I agree with regarding health-care policy and likely most major issues. His behavior, however, and the bills he’s racking up for the American taxpayers and the grandkids who are going to have to clean up the fiscal mess our country is in, are not excusable. 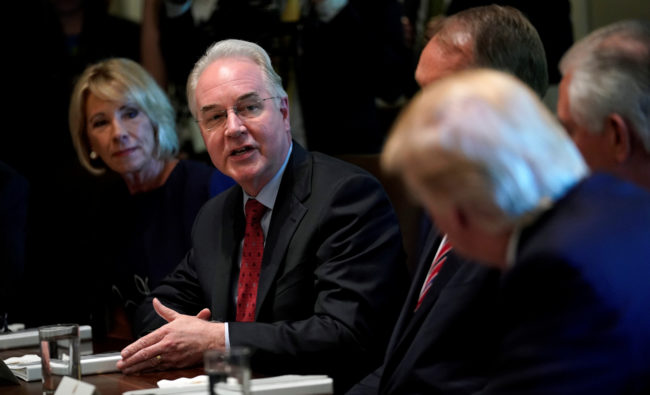 Politico, the liberal-leaning news outlet, reports that Price has racked up about $1 million in unnecessary private air travel during his short eight months in office. That’s not simply unacceptable, it’s an affront to our national character, and his excuses are laughable. His predecessors in the Obama administration reportedly didn’t do this. Neither did the health secretaries I worked with in George W. Bush’s White House.

One issue you never hear discussed in D.C. is, why do the American people hate us so much? Their reasons are many, but a big one is the increasing sense that the system is rigged. We’re not supposed to have a gilded government class in the United States, like they do in China and other communist countries. As conservatives who favor limited government, we should be at the forefront of pushing back on this growing problem.

Was the press largely silent about similar abuses during the Obama years? Absolutely. We heard the silence daily. Where was Politico when The Daily Caller reported on the costs of Eric Holder taking his family to triple crown horse races in the government’s luxury Gulfstream jet? The Department of Justice justifies its use of luxury private jets on security grounds. Where was the media when we were one of the only outlets reporting that, in fact, two-thirds of the private plane use was in fact for “jet-setting executive travel,” as explained by Sen. Chuck Grassley.

The fact that Obama appointees regularly abused the public trust, or that the liberal press dutifully ignored it, doesn’t make Tom Price charging taxpayers for his jet travel any more acceptable. Government service is supposed to be about “serving.” Maybe that’s too quaint a notion these days, but the irresponsible behavior and common disregard for the money hard-working Americans send to Washington is too vulgar to condone any longer. If he means what he says — what he campaigned on and what his supporters rightly expect — President Donald Trump should fire Secretary Tom Price.