Crude oil exports reached a record 900,000 barrels per day in the first half of 2017, according to Energy Department data.

EIA alo noted “U.S. exports of total motor gasoline averaged a record high of 756,000 b/d, a 3% increase from the first half of 2016” thanks to high levels of domestic gas production.

It’s good news for President Donald Trump, who’s made “energy dominance” a key part of his strategy to boost U.S. economic growth. Trump has pushed policies to open up more federal lands and offshore areas to drilling and reduce the regulatory burden on oil and gas producers.

However, the current uptick in exports has more to do existing economic trends and policy changes under the last administration and Congress.

Crude oil exports exploded since restrictions were repealed in late 2015. Former President Barack Obama threatened to veto legislation lifting oil export restrictions, but eventually approved of the measure as part of a larger budget deal with the GOP.

But the pressure to lift the oil export ban only came after U.S. crude production exploded, almost entirely due to hydraulic fracturing and horizontal drilling into shale formations. 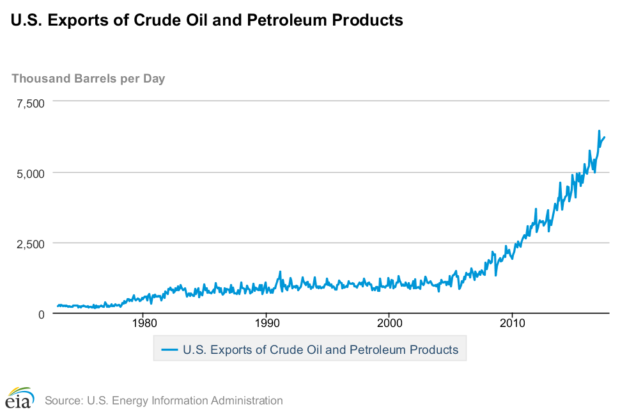 EIA reported that “China increased its crude oil imports from the United States by 154,000 b/d and became the second-largest importer of U.S. crude oil, averaging 163,000 b/d in the first half of the year.”

Canada is still our biggest crude oil trading partner, but increasingly U.S. companies have been shipping fuel to China and Europe.