The media once again demonstrated their absolute disdain for President Trump by mocking anything and everything related to Tuesday’s turkey pardon.

The annual White House tradition is supposed to be a fun event right before the Thanksgiving holiday, but President Trump being in office seems to have robbed the media of any joy.

MSNBC’s Joy Reid admitted that she can’t see presidential traditions as “cutesy” when Trump does them because of the “legal, ethical and moral clouds over his presidency.”

Gotta say these traditions — the turkey pardon, and other cutesy things presidents do — are lost to the ether for me when Trump performs them. The legal, ethical and moral clouds over his presidency are like a film on the camera lens.

Speaking for me on the turkey pardon. And perhaps it’s time to retire these silly ceremonies altogether, since their unifying force has long been lost in our two Americas. https://t.co/ZStD84Nc34

Only this time it was a turkey doing the pardoning 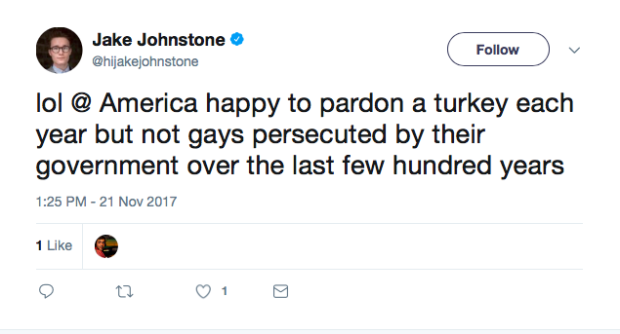 The senior White House correspondent for Ami Magazine implied that the pardon is silly in light of “murdering thousands of elephants,” even though the Trump administration decided to uphold the ban on “horror show” elephant hunting after hinting at rolling it back over the weekend.

“We’re gonna pardon this single turkey and we’re gonna rush through this quickly so we can get back to murdering thousands of elephants…” pic.twitter.com/5T6pB5RigT

I hope the turkey said thank you. https://t.co/SkeJ5QzYuq

I heard the turkey, who in other counties would have been treated much more badly, wasn’t even grateful! Very sad!

Blake Wexler, writer for Comedy Central, joked that Trump managed to find “the only white turkey,” implying that the president is racist.

Trump finds a way to pardon the only white turkey in the history of turkeys pic.twitter.com/cIzXKJOeNv

Showing her absolute cleverness, Cheri Jacobus went back to jokes about Trump’s hand size, mockingly stating that her hand-drawn turkeys in Kindergarten were the same size as Trump’s hands.

when I was in kindergarten we traced our hands to draw a turkey. Trump’s hands are the same size as that turkey I drew with my hand. At age 5:) https://t.co/GzwfufoSiU

The media did the same thing yesterday when White House press secretary Sarah Huckabee Sanders asked reporters to state what they are thankful for, proving that people can turn anything from this administration into a scandal. (RELATED: Leftist Twitter Angry At Sarah Sanders’ Exercise In Thankfulness)