Clemson has taken over the top spot in the latest round of the AP and Coaches polls.

The top ten in the AP Poll are:

The top ten in the Coaches Poll are:

What a wild shakeup from where we were at this time last week. 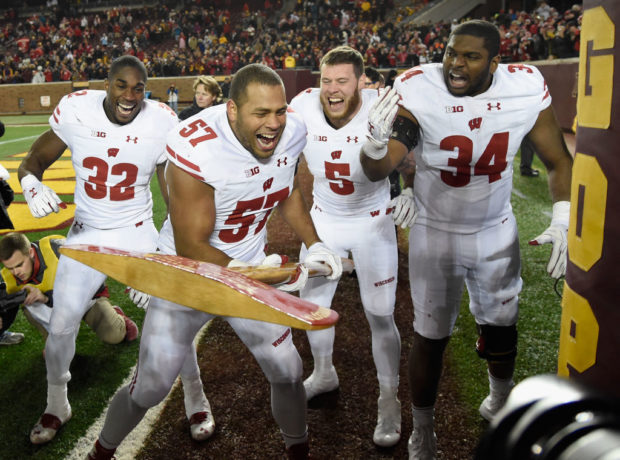 MINNEAPOLIS, MN – NOVEMBER 25: Leon Jacobs #32, Garret Dooley #5, Chikwe Obasih #34 of the Wisconsin Badgers cheer on teammate Alec James #57 as he pretends to chop down the goal post with Paul Bunyan’s Axe after defeating the Minnesota Golden Gophers in the game on November 25, 2017 at TCF Bank Stadium in Minneapolis, Minnesota. The Badgers defeated the Golden Gophers 31-0. (Photo by Hannah Foslien/Getty Images)

Alabama and Miami took massive hits after devastating losses. At the same time Wisconsin, Clemson and Oklahoma all cemented themselves as the most elite teams in the country.

It’s interesting to note that in the Coaches Poll Wisconsin got the second most first place votes, but is stuck at number three. That means voters are very split on them. Coaches either view them as the best team in America or not even in the top five.

The next college football playoff rankings will be released Tuesday night, and then we’ll have our clearest picture yet as to whose ticket is getting punched.