A federal watchdog dinged the Department of Transportation (DOT) Thursday for violating anti-lobbying rules by liking and retweeting Steve Forbes.

The DOT reportedly messed up when the administrators of a Twitter account “liked” and retweeted a message from Forbes, a billionaire activist and philanthropist.

Forbes called on Congress in July to ratify the 21st Century Aviation Innovation, Reform, and Reauthorization Act Act [AIRR Act], which would move some responsibilities from the Federal Aviation Administration into a private, non-profit entity. 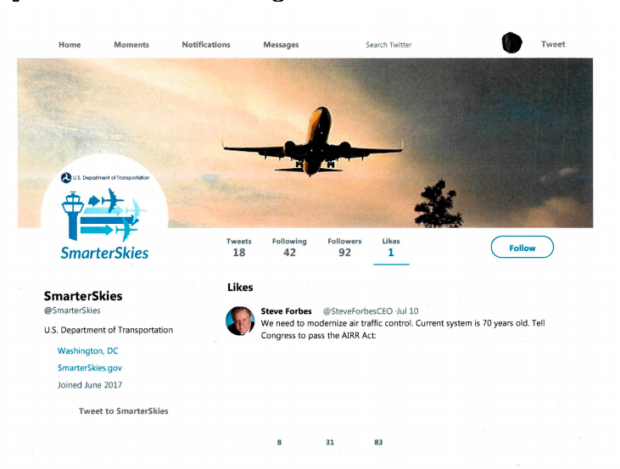 While Forbes is completely free to advocate for the passage of any legislation under the First Amendment, liking and retweeting that message amounts to a violation of of the government’s anti-lobbying rules, which state that “No part of any funds appropriated in this or any other Act shall be used by an agency of the executive branch, other than for normal and recognized executive-legislative relationships, for publicity … designed to support or defeat legislation pending before the Congress, except in presentation to the Congress itself.”

When the Office of General Counsel discovered the tweet the next day on the Smarter Skies account — which had roughly 100 followers as of Thursday afternoon — it recommended that the agency delete and unlike Forbes’s tweet.

The agency did undo the retweet, but when the DOT Inspector General looked into the matter, they noticed Aug. 15 that one could still see the Forbes tweet in the agency account’s “likes” on Twitter. The Smarter Skies account then un-liked it after that.

“Although DOT was not the author of the tweet, DOT, by retweeting and liking it, not only endorsed the message, but also created agency content,” the GAO wrote in a report released Wednesday. Creating agency content means that DOT spent taxpayer dollars, appropriated by Congress, in advocating for a specific piece of legislation.

Since taxpayer money was used, the DOT has to calculate exactly how much was spent in the prohibited act of liking and retweeting the Forbes tweet, and report that spending to Congress and the White House.