The ladies of ABC’s “The View” just could not shake the Fox News in Greta Van Susteren during her Thursday appearance. She’s ex-Fox News now, having said it hadn’t felt like home for a few years. She even did a stint on their favorite MSNBC before that network canned her and replaced her with Ari Melber.

But to no avail. Even MSNBC couldn’t wash away her Fox News stench.

No matter what Van Susteren said, she just could not get the ladies to warm to her. Greta was on the show to guest host at the “Hot Topics” table and discuss her new book, Everything You Need To Know About Social Media (Without Having To Call A Kid). But the ladies had only one book on the brain: Michael Wolff‘s Fire and Fury.

Burrrr! Is it cold in here? Or is that just Joy Behar and Sunny Hostin giving Van Susteren the stink eye? Meghan McCain, a conservative, wasn’t much nicer. And Whoopi Goldberg couldn’t give two shits about Van Susteren.

“Joy Behar’s absolute dislike and contempt for Greta Van Susteren to day on The View is the best thing that can happen today,” wrote @BuzzerBlog (a game show blog) on Twitter. “Nothing will top her expressions of frustration and disgust. I love her.”

“First, Joy Behar and the others were very nice to me,” she replied. “Second, I am not sure why the hostility even if you don’t agree w/ me…is it worthy of this hostility ? BTW I don’t feel hostile towards you.”

Greta seemed to accept that some viewers will never like her.

“Looks like I have some new friends. #Not,” Van Susteren wrote in response to a few viewers who thought she was the one who was rude on the show. 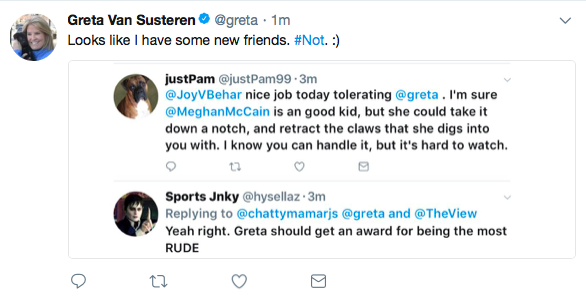 Despite the strange interactions with the ladies, Van Susteren was gracious.

“I enjoyed being a guest host on @TheView – the staff and hosts were very nice to me, too,” she wrote.

Judging from her smile, perhaps she had a good time after all despite all appearances to the contrary. 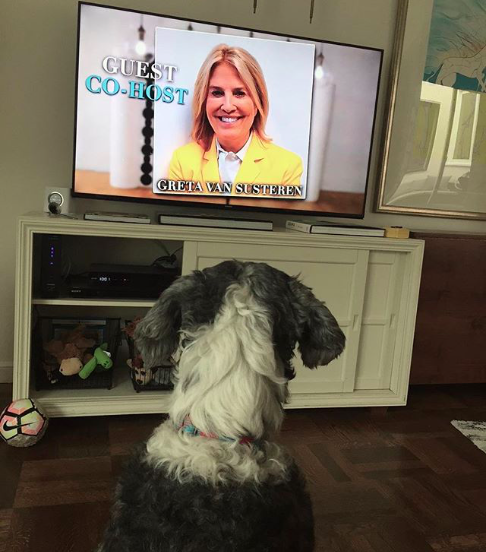