There are several other 9mm sub-compact pistols out there, and with the exception of the Bond Bullpup, they have one common problem — their barrels are, arguably, too short. Because of that, the excellent 9mm Luger round does not have time to attain what I’d consider its optimum velocity. In some of those guns, there’s barely 2″ of rifling.

A few years ago, Arne Boberg solved the problem. He extended the barrel to the rear, over the magazine well, and used a back-feeding magazine system. For a few years, he produced the pistol as the Boberg XR9-S. A little over a year ago, the design was acquired by Bond Arms, and I’ve been trying out one of the first examples of the Bond “Bullpup.”

The original Boberg pistol had some very unique features and they’re carried on in this model. The cartridges are put into the magazine nose-first, exposing the case-head and rim at the rear. When the slide cycles, a set of “tongs” pulls the round out of the magazine to the rear, onto a platform in the frame. The moving slide engages a lug on the platform face lifting the round to the breech-face and extractor, perfectly aligned to go into the chamber. None of this is tricky or flimsy — all of these parts are substantial, and made of high-grade steel.

Another feeding advantage is the turn-barrel locking system. In addition to the straight-line feed, the turn-barrel design also gets the bore axis closer to the hand. And, the turning rate tends to adjust to the power of the load.

The unique shape of the Bond Arms Bullpup is due to the unusual design of this lightweight semi-auto. The Bond Bullpup (top), with the precursor Boberg XR9-S.

The rearward-feed magazines, one with a round in place and one showing the bare-spring, which doesn’t affect reliability at all.

The system goes way back to 1905, and two designers, unknown to each other. In America, Elbert Searle used it in the Savage pistols. In Austria, Karel Krnka did a more elaborate application in the Roth-Steyr of 1907. Not to malign the fine falling-barrel system of John Moses Browning, the turn-barrel has a lot to recommend it. Over the years, it’s been used in several other excellent pistols, including the Beretta Cougar and the French MAB P-15.

While we’re around historical stuff, let’s take a quick look at the only other time a back-feeding magazine was tried. It was in the first years of the semi-auto pistol, just before 1900. The exact year was 1895, and the designer was Hugh W. Gabbett-Pairfax. His huge pistol was called the Mars. Unlike the beautifully-engineered Bond Bullpup, it was a disaster. Its locking system was a small separate turning breech block in the massive slide. After the cartridge was pulled rearward out of the magazine and lifted, it was fully exposed outside, at the rear, held only by the extractor pressure! The Mars didn’t last long.

In the Bond Bullpup, the cartridge-handling parts are all internal, and it works perfectly. There is one caution — ammo. Never use low-priced cartridges with un-crimped bullets, or aluminum cases. If you do, the vigorous action will occasionally pull the case off the bullet, a spectacular malfunction as you might imagine. In the manual, there are extensive lists of approved loads for range use and serious business.

The Bullpup can be ammo-sensitive and Bond supplies a list of “approved” ammo. The test gun ran fine using approved loads. Among them are the Winchester White Box and this Hornady load.

Just before let-off, the wide hammer emerges to this position. Trigger pull is DAO and very smooth.

The firing system of the Bullpup is a true Double-Action-Only, or DAO as we firearm aficionados might say. It has a pivoting hammer visible at the rear, and the very smooth trigger pull averages eight pounds on my test pistol. If you really know your gun, a slow careful pull will let you find that little hesitation-point as the hammer emerges allowing what is essentially a very precise final single action press at the end of the cycle.

With the DAO trigger system, there’s no need for a manual safety as it’s essentially the same as a DA revolver. There is a safety inside though, a firing-pin-block, cancelled in the last fraction of trigger pull. There’s no magazine-disconnect safety and no silly “flipper” in the wide, smooth-surfaced trigger. On top, at the rear of the chamber, a small opening lets you see if there’s a round in the chamber.

The only other external controls are the takedown lever and the push-button magazine release. There’s no slide hold-open after the last shot. With the rearward-feeding magazine, it would have been tough to include this feature. However, for a quick bore brush-out, you can set the takedown lever at its half-way point to lock the slide open.

The frame is high-tech lightweight alloy, finished in matte black on the test gun. The other parts, in natural matte, are stainless steel. The laminated-wood grips go around, meeting on the back-strap. At upper-rear, a deep in-curve gives a very comfortable hold. Later, other finishes may be offered.

In addition to the rear-feeding feature, the magazine is also different in another way — at the top, there’s no follower-piece. The spring is formed for smooth contact with the cartridge. It works flawlessly, but may be a bit unsettling for some older gun-people. During the Boberg production, a follower was offered separately, just for those who wanted to see one there.

The takedown lever can be set half-way to act as a slide hold-open since there is no classic slide release in the conventional sense.

A view of the “tongs” designed to pull the cartridge out of the magazine to the rear ready to feed into the chamber.

On a deep-concealment pistol of this type, sights are of less importance, but these are still very good. They are square-pictured, with three white dots. The front and rear are both laterally adjustable in their dovetails after you loosen the hex-head screws. Make sure if you’re moving the rear sight it stays in its dovetail as it retains the firing-pin-block spring and plunger.

Since recoil in this light, small gun is a bit snappy for my hands, I put on a GripSwell glove and it helped a lot. For ammo, I used two of the Bond-recommended loads: Winchester “White Box” 115-gr. FMJ and the Hornady Critical Defense 115-gr. FT3C. A standing, two-hand hold, at seven and 15 yards gave me groups averaging 4″ to 5″. From a bench it appears these little guns can hit in the 2.5″ to 3″ range at 25 yards according to other testing Handgunner conducted.

In the Bullpup, the rifled portion of the barrel is about 2.7″. This extra length results in some loads getting up to around 1,400 fps. Among the 9mm pistols of this size, this is the only one chasing those kinds of numbers. And, at about 18 ounces, it’s light in the pocket or on the hip. At a suggested retail of $977, it’s not in the low-price category, but it’s also not really pricy when you compare most high quality pistols today. But hey, look at what you get! 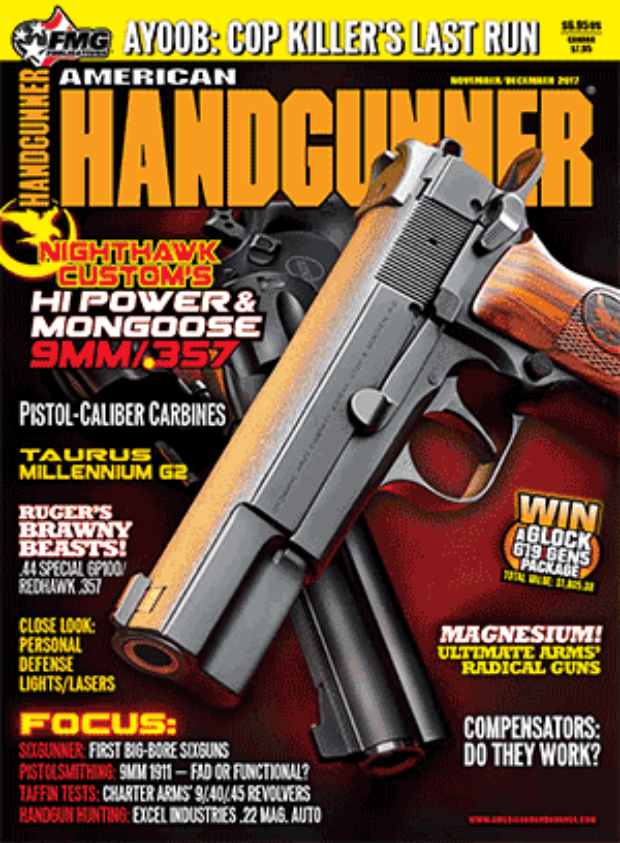