The movie “Downsizing” opened in December of 2017, eventually grossing about $40 million worldwide. The movie’s main characters are shrunk to five inches tall, part of an effort to reduce the size of people, reduce their environmental footprint and save the planet. It’s a fun fantasy, but “Downsizing” repeats tired fears of overpopulation that have wrongly plagued us for decades.

News outlets gushed over the “Downsizing” concept. The Guardian called it a “blisteringly brilliant film.” The Spectator labeled it “a film with the most brilliant premise.” The Telegraph described the movie as a comedy “big on ideas.”

The movie builds on fears of overpopulation, a foundation of the ideology of environmental sustainable development, which has been broadly accepted. Today, colleges and universities teach students that modern society is unsustainable. They claim we’re using too much energy, emitting too much carbon dioxide, and exhausting our resources, in large part because of an uncontrolled rise in world population.

Paul Ehrlich is probably the most famous of the population doomsayers. In his 1968 best-selling book, “The Population Bomb,” Ehrlich stated: “The battle to feed humanity is over. In the 1970s and 1980s hundreds of millions of people will starve to death in spite of any crash programs embarked upon now.”

By 1970, it appeared that the alarmists might be right. Population had climbed to 3.7 billion and the growth rate exceeded two percent per year. But the predicted famines never happened and the rate of population growth subsequently declined dramatically.

Human ingenuity produced an agricultural revolution in the 1960s. Biologist Norman Borlaug developed disease-resistant, high-yield strains of wheat and rice, stimulating agricultural output to grow faster than population. Borlaug is credited with saving the lives of a billion people. Yet today, the false overpopulation warnings of Ehrlich are better known on campuses than the achievements of Borlaug.

In addition to the agricultural revolution, global fertility rates began to fall. In 1950, the average woman would bear 5 children during her lifetime. By 2010, the average woman would bear only 2.5 children. By 2010, 74 of 210 countries in the United Nations Population Division database had dropped below the 2.1 births-per-woman level needed to maintain a constant population. 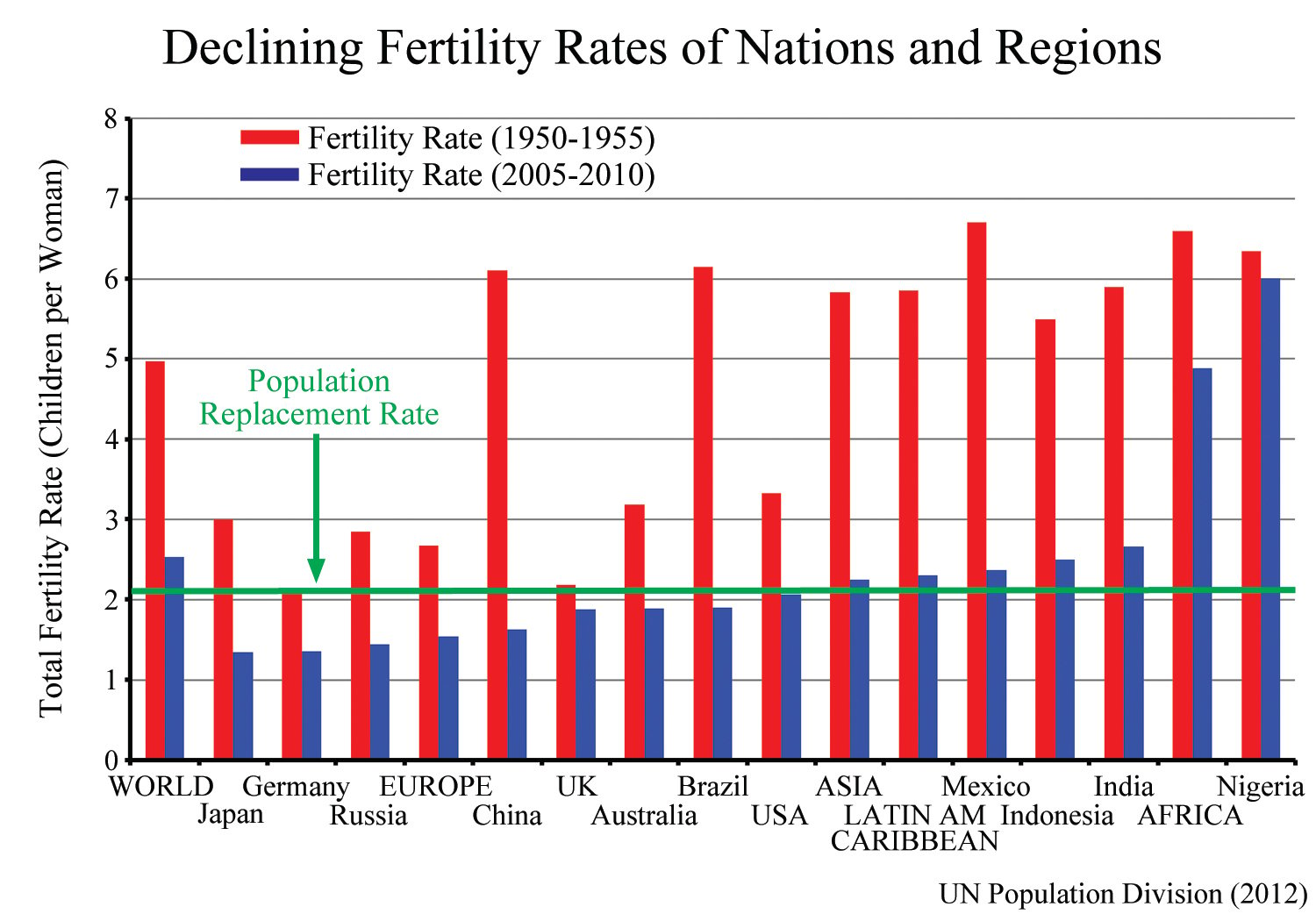 The worldwide drop in fertility was caused by the demographic transition of society. As nations move from an agricultural to an industrial to a technological society, income and education levels rise, women enter the work force, and the family size gets smaller. This demographic transition occurs in all countries. People do not multiply like bacteria.

Sadly, overpopulation fear produced a dark stain on human history. In the mid-1960s, the US Agency for International Development and the World Bank established policies requiring population control measures in exchange for loans or foreign aid. These actions helped to cause more than one-third of the world’s people to be subjected to coercive population control.

In order to receive food aid from the US government, India established sterilization and intrauterine device (IUD) insertion quotas in 1966 in each Indian state. Over 40 million Indian people were sterilized between 1965 and 1985, most coercively. Since boys were preferred to support parents in old age and to continue the family line, government policies induced Indian parents to choose sex-selective abortion and even the killing of girl babies.

Population control measures reached their full flower in China with the adoption of China’s one-child policy in 1979. Married couples were required to obtain government permission, in the form of a “birth permit,” before the woman became pregnant. Chinese families were forced to accept the birth control method dictated by the government. Child-bearing women were required to report their menstrual cycle to officials and to report for quarterly ultrasound exams to check the status of their IUD. In 2013, China reported that 336 million abortions and 222 million sterilizations had been carried out since 1971.

It’s clear that global population is stabilizing. The UN Population Division projects that world population will rise from 7.6 billion in 2017 and level off at about 11.2 billion in 2100. The UN estimates that total fertility will drop to two children per woman by 2100, or negative population growth.

So, we won’t need downsizing to save society from overpopulation, despite what your professor or Hollywood filmmaker tells you.