Nikolas Cruz, the suspect in a mass shooting in Parkland, Florida that killed 17 people, appeared in court Monday.

Cruz is 19 years old and was a former student of Marjory Stoneman Douglas High School, where he was expelled. He is the suspect in a mass shooting at the high school last week. (RELATED: The FBI Keeps Missing Mass Shooters Before It’s Too Late)

His social media presence shows that he loved guns and was reportedly “involved in a YouTube chat room conversation about bombs or building bombs.” (RELATED: Here’s Everything We Know About The Florida High School Shooting Suspect)

President Trump tweeted over the weekend:

“Very sad that the FBI missed all of the many signals sent out by the Florida school shooter. This is not acceptable. They are spending too much time trying to prove Russian collusion with the Trump campaign – there is no collusion. Get back to the basics and make us all proud!” 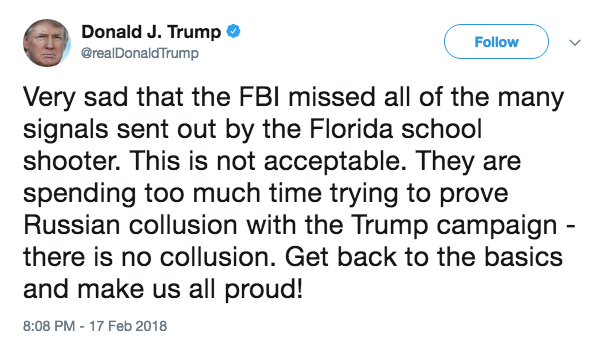