The daughter of one of President Trump’s cabinet secretaries tweeted — then deleted Tuesday — about a “political conspiracy” by “right-winged” “Trump appointees, designed to uproot an Obama holdover.”

The comments echo those of her father, Department of Veterans Affairs Secretary David Shulkin, who warned of a conspiracy against him by conservatives at the VA, speaking of “subversive events” and saying those who have defied him “won’t be working in my operation.”

Jennifer Shulkin, a Harvard Law student and Huffington Post writer, tweeted: “‘Ethical violations’ are an excuse to undermine my father and privatize VA. For the story of political conspiracy you haven’t heard… #ShulkinStays.” 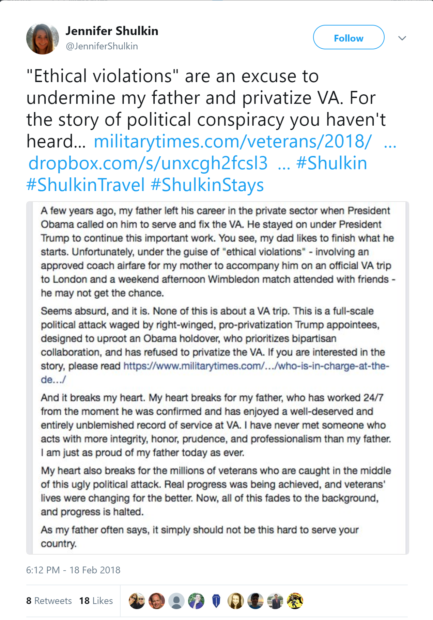 “President Obama called on him to serve and fix the VA. He stayed on under President Trump” because “my dad likes to finish what he starts. Unfortunately, under the guise of ‘ethical violations’ — involving an approved coach airfare for my mother to accompany him on an official VA trip to London and a weekend afternoon Wimbledon match attended with friends — he may not get the chance. Seems absurd, and it is. None of this is about a VA trip. This is a full-scale political attack.”

Meanwhile, Shulkin told Politico Tuesday that it was conservative foes and not he who would be fired. He also claimed that the White House supports him.

But conservatives like Darin Selnick, veteran affairs adviser for the White House Domestic Policy Council, and Jake Leinenkugel, a Trump official embedded in the VA, have struggled against Shulkin to implement policies favored by conservatives at the agency. Leinenkugel noted that Shulkin’s right hand woman, chief of staff Vivieca Wright Simpson, proudly said she was a Democrat.

Simpson resigned Friday after the inspector general found that she had falsified an email to wrongly obtain approval for pay for a trip to Europe for Shulkin’s wife.

“I want the very best thing for her… this is a very, very tough time, when your integrity is challenged, when your ethics are challenged,” Shulkin told The Daily Caller News Foundation on Friday.

Public statements indicated the VA was seeking to reassure the White House that it has not become a rogue Democratic agency. The announcement of a new chief of staff Friday night said the new chief will “ensur[e] that the department works closely with the White House going forward.”

Shulkin would not say if he thought Simpson had written the incriminating email. He instead told Congress that it could have been a hacker — even though it came in the middle of a back-and-forth that started with a verbal discussion.

He described to TheDCNF the single incident he says supports his claim on the very day the IG released the report on the incriminating email.

The White House also forced Shulkin to delete a statement saying he had “done nothing wrong.” TheDCNF asked the secretary what if anything he did anything wrong.

“I regret that there is this distraction,” he said.