Defense Secretary James Mattis supported his opposition to an upcoming Senate resolution that would remove US Armed Forces from Yemen, stating Thursday that keeping US forces in the region “is the best way to continue pushing this to a U.N.-brokered negotiation.”

In a Wednesday letter to Senate Majority Leader Mitch McConnell, Mattis stated, “The Department opposes this proposed resolution,” and asked that Congress “not impose restrictions on continued limited U.S. military support of coalition forces in engaging in operations in its legitimate exercise of self-defense.” 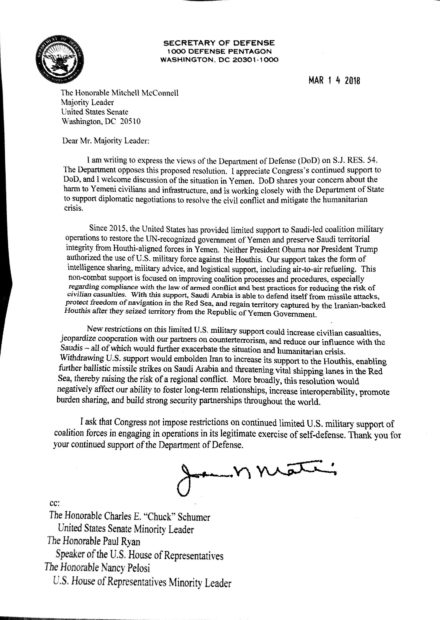 Defense Secretary James Mattis sent Congress a letter obtained by The Daily Caller in which he expressed his opposition to a resolution to remove US Armed Forces from Yemen.

Crown Prince Mohammed bin Salman of Saudi Arabia will visit the White House next week to discuss relations between the US and Saudi Arabia. During the same week, Senate members will vote on the Yemen resolution. If it passes, it could be an embarrassment for the Trump administration while meeting with bin Salman.

Mattis added Thursday night he was “supposed to testify” on the resolution.

“I was supposed to testify on this, and they moved the testimony up, or they moved up the vote.  For some reason, it had to happen, and I’d already committed to be in this region, and a lot of effort had gone in with other governments to be out here,” he said. “I think we are either on our way, or pretty close to being on our way. So my undersecretary of policy went in to do the testimony and I didn’t want him going in without me weighing in.”

“So I sent a letter to, I think, the Senate majority leader and ranking member, as I recall, giving our rationale why we believe this is the best way to continue pushing this to a U.N.-brokered negotiation,” Mattis stated. “And so I sent a letter in along those lines, and that’s where I stand on it.”

Department of Defense spokesman Major Adrian Rankine-Galloway told The Daily Caller Friday, “It is in our national security interests to support our partners in the Gulf as they face continued threats from non-state groups enabled by the Iranian regime as well as al-Qaeda in the Arabian Peninsula and ISIS in Yemen.”

“Well, the letter’s out there.  I mean, I’d prefer to let the letter stand as it is,” Mattis told the press on his way back to the US from Afghanistan. “And we believe our policy right now is correct for doing this. And that was the gist of my letter, so that my undersecretary had me on the record there and he wasn’t carrying the water alone.”

Congressional staff who worked closely with the resolution previously told The Daily Caller, “For over a year, the executive branch has ignored the most basic, bipartisan efforts by Congress to obtain the legal justification for a secretive war being carried out by the United States in collaboration with Saudi Arabia.” (RELATED: Senators Bernie Sanders And Mike Lee Come Together Over War Powers Resolution)