During oral arguments in a partisan gerrymandering case argued at the U.S. Supreme Court on March 28, Justice Stephen Breyer floated a rather odd proposal.

The case was the second political gerrymandering dispute the Court has heard this term. Both arguments yielded a strange outcome. Though a majority of the justices clearly find partisan mapmaking odious and unconstitutional, there are serious disagreements as to when and how judges should police politically-driven district maps.

A third controversy, arising from North Carolina, is currently pending.

Since there appears to be no solution appealing to at least five justices, Breyer wondered if the Court should rehear all three cases during its next term, which begins in October.

“What would you think of taking the three cases and setting them for reargument?” he asked Michael Kimberly, attorney for the plaintiffs.

The question, no doubt asked in good faith, may have served a second purpose — luring Justice Anthony Kennedy to remain on the bench for another year. 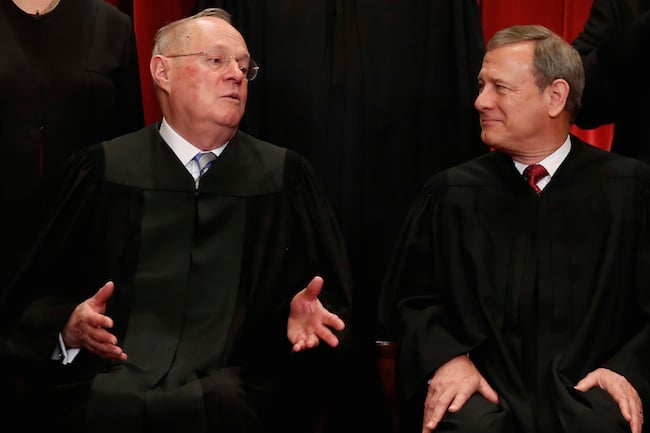 That Kennedy, 81, is seriously contemplating retirement is a widely-held, thinly-sourced Washington truism. Few close to the justice have a sense of his plans, though he has told prospective clerks that he may soon leave judicial service. Still, the prospect of his replacement by a strident conservative ideologue no doubt troubles Kennedy’s liberal colleagues, the Court’s vaunted comity notwithstanding.

As ever, Kennedy will likely dictate the outcome of the gerrymandering cases. The last political line-drawing dispute the Court heard was a 2004 case called Vieth v. Jubelirer, in which the justices divided in three directions. Four argued partisan gerrymanders are unconstitutional, and should be subjected to judicial scrutiny. Another four disagreed, arguing there are no manageable standards courts can use to determine when gerrymanders are excessively partisan.

Kennedy took a third position. Writing only for himself, he argued that partisan gerrymandering is unconstitutional, but agreed no easy test yet existed to identify them. Therefore, he said, judges should not hear such challenges until the appropriate standard is identified.

The three cases before the Court this term all take up Kennedy’s challenge in different ways, but it’s not clear which of the proposed alternatives a majority of justices might endorse, if any — thus, Breyer’s proposal to reargue each dispute.

Embracing Breyer’s suggestion would give the bench more time to think through possible solutions and could entice Kennedy to put retirement off for one more year, in order to resolve a legal question about which he’s cared intensely for over a decade.

Should that scenario play out, a Kennedy retirement would not come until at least 2019, at which point Democrats might control the Senate, mooting any hope of a conservative jurist’s confirmation.

It’s difficult to know what exactly to make of Breyer’s question, but even if he had no ulterior motive, ordering reargument may change Kennedy’s retirement calculus, making the disposition of these cases an important catalyst of the Court’s future.