CNN’s Brian Stelter was up in arms when Sinclair Broadcasting asked its anchors to read a script warning against fake news, but he’s been stunningly silent about NBC pressuring female employees to support accused sexual harasser Tom Brokaw and NBC’s memo to staffers telling them to report on the support for Brokaw.

Both are cases of news companies dictating the voices of their employees, but apparently only one is worth massive coverage and condemnation to Stelter.

When a video came out showing Sinclair anchors reading the script in perfect unison, Stelter wondered what it meant for journalism and even found a left-wing Sinclair employee who quit over the “scandal.” (RELATED: Brian Stelter Won’t Tell You He Hates This Media Organization When He Covers It)

Yet Stelter has had little, if anything, to say about female employees at NBC stating that they felt pressured to sign a letter supporting Tom Brokaw against sexual harassment allegations.

Page Six reported on Monday that staffers “felt forced” to sign the letter and worried that it will “have a chilling effect on other women coming forward.”

In an even more chilling comparison to the Sinclair story, Variety reported on Tuesday that NBC sent a memo to anchors asking them to report on staffers’ support for Brokaw during their on-air broadcasts.

The story was never linked in any of Stelter’s Reliable Sources newsletters, which go out every evening.

Stelter noted in Sunday’s letter that colleagues were defending Brokaw and that there is “tension” over the letter, but the linked article on CNN only indicates that staffers had a hard time deciding whether or not to sign it.

A Twitter user even asked Stelter if he was going to report on the NBC pressure the same way he reported on Sinclair, only for Stelter to claim that there is “nothing unusual” about the memo sent to staffers.

He added, “we are continuing to cover the [B]rokaw story,” not addressing the fact that he has yet to tweet about or mention in his newsletter the allegations of NBC pressuring employees. 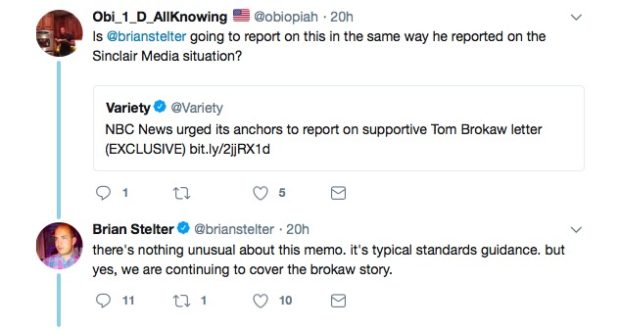 Stelter’s only other tweet about Brokaw came on April 26, the day the sexual harassment allegations first broke. 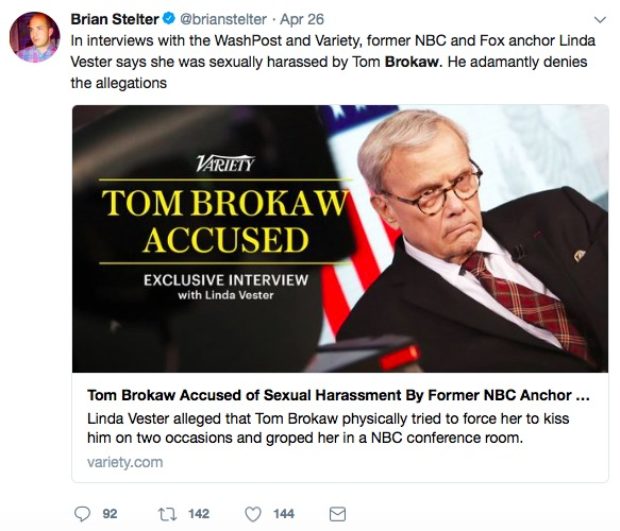 According to Variety, NBC anchors were told to “Include relevant portions of Brokaw’s denial, his email and the email in support of him, signed by more than 60 colleagues” when delivering Brokaw’s side of the story.