Before President Donald Trump made history Monday by relocating the U.S. Embassy in Israel to Jerusalem, CNN published a story claiming the move would be a “break with tradition,” “formally breaking from decades of established American policy and international practice.”

This ignores some basic facts. 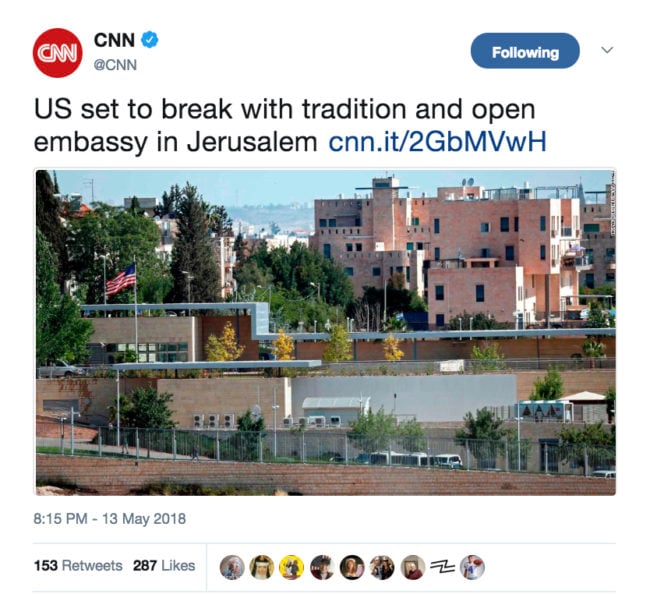 In truth, Israel was the only country with which the U.S. has diplomatic relations where our embassy does not follow the norm of residing inside that country’s capital, the Christian Science Monitor reports.

The Monitor article goes on to state that even as a nation’s capital moves, our embassy moves with it.

“As a routine matter, when a capital is moved, we move our embassy. This practice was followed when Brazil decided to move its capital from Rio de Janeiro to Brasilia and when the government of Saudi Arabia, which until recently declined to have embassies located in its capital, indicated that it would like to have embassies in Riyadh.”

There are four countries where the U.S. has not diplomatic relations and therefore no embassy: Iran, Syria, Bhutan and North Korea.

In addition, U.S. law since 1995 has been to move the embassy to Jerusalem. Presidents since then have deferred the decision, maintaining a potential bargaining chip for a peace agreement with Palestinians, who also lay claim to the city.

While the geopolitics of the Holy Land will always be complicated, this point is not: The U.S. Embassy move to Jerusalem is standard operating procedure for U.S. diplomacy.

It standardizes our diplomatic policy in Israel with American diplomatic procedure worldwide. It honors the host countries wishes and sets an important precedent: That U.S. policy is not subject to international political pressure.