The missile that shot down Malaysia Airlines Flight 17 (MH17) in Eastern Ukraine in 2014 was fired from a launcher belonging to the Russian military, an investigative team revealed for the first time Thursday.

While flying from Amsterdam to Kuala Lumpur on July 17, 2014, the Boeing 777 aircraft carrying 298 people was shot out of the sky by a Buk missile fired from a farm near Pervomaisk, Ukraine. The missile was fired from a Buk TELAR (transporter erector launcher and radar) that belonged to Russia’s 53rd anti-aircraft missile brigade, the Joint Investigation Team looking into the incident revealed at a press conference in the Netherlands, according to CNN. 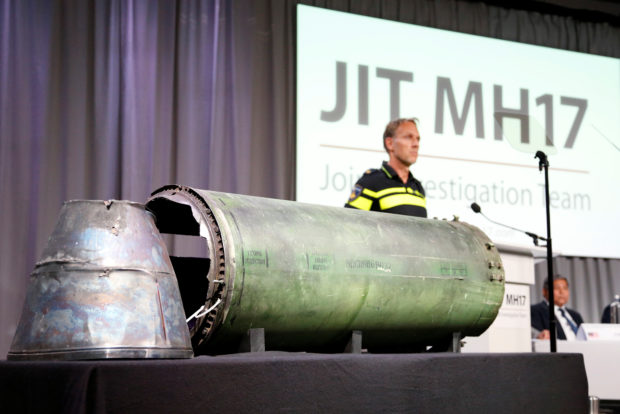 A damaged missile is displayed during a news conference by members of the Joint Investigation Team, comprising the authorities from Australia, Belgium, Malaysia, the Netherlands and Ukraine who present interim results in the ongoing investigation of the 2014 MH17 crash that killed 298 people over eastern Ukraine, in Bunnik, Netherlands, May 24, 2018. REUTERS/Francois Lenoir

Thursday’s revelation marks the first time the Russian military has been linked to the fatal downing of MH17, which ended the lives of everyone on board, people from a total of 17 different countries. The Dutch Safety Board confirmed in 2015 that the plane had been struck by a Buk missile, and in 2016, the Joint Investigative Team presented evidence that the launcher appeared to have come from Russia, BBC reported. (RELATED: CONFIRMED: Russian Missile Blew Up Commercial Airliner)

Now, the investigative team has identified the specific Russian military unit from which the weapon system reportedly came.

“All the vehicles in a convoy carrying the missile were part of the Russian armed forces,” Wilbert Paulissen, head of the Dutch National Police’s crime squad, explained during a presentation, The Independent reported.

“This raises questions such as to whether the brigade was actively involved in downing MH17,” he added. “It is an important question which the JIT are still investigating.”

The Joint Investigative Team, which includes investigators from Netherlands, Australia, Belgium, Malaysia and Ukraine, has called on Russian authorities to provide information about the personnel potentially involved in the strike on MH17, but Moscow is refusing to cooperate, denying any involvement in the deadly incident. On its own, the team has managed to narrow down the list of suspects from more than a hundred to a few dozen.

“We have a lot of proof and a lot of evidence, but we are not finished,” Westerbeke explained.