Conservative students at a California university had their anti-socialism display vandalized, according to photos and videos obtained Monday.

Santa Clara University’s Turning Point USA chapter set up a table Thursday, as well as 1,000 flags representing 20th century victims of socialism and communism, according to media and comment obtained by The Daily Caller News Foundation. The group had one of its fliers smacked, flags ripped out of the ground, and a table almost toppled.

A female student became “hostile” at the group’s booth, he claimed.

“Cuba has done great,” the female student argued. “They have like 99 percent literacy, they have f**king their own health brigades.”

“She consistently shouted us down as we tried to create a civil dialogue, resorting to derogatory comments (calling us, dumb, uninformed, and liars) and being openly hostile while assuming motives/arguments that we had never alluded to (referring to us as ‘a bunch of f***ing Trump supporters’ and implying inherently malicious motives),” McLaughlin said.

The Turning Point vice president stated, after a Santa Clara Reserve Officers’ Training Corp (ROTC) member made a pro-capitalism remark while passing the table, the unnamed student said she didn’t want to hear from someone wearing a uniform that he uses “to shoot brown people.” When the ROTC member noted that his mom was Iranian, the female student allegedly said, “I guess you shoot your mom then.”

The female student “grabbed one of our posters and ripped/crumpled it before rudely throwing it at my colleague, and later tried to flip over our table with our tabling supplies on it,” McLaughlin said. He reported that another female student ripped some of Turning Point’s flags out of the ground. 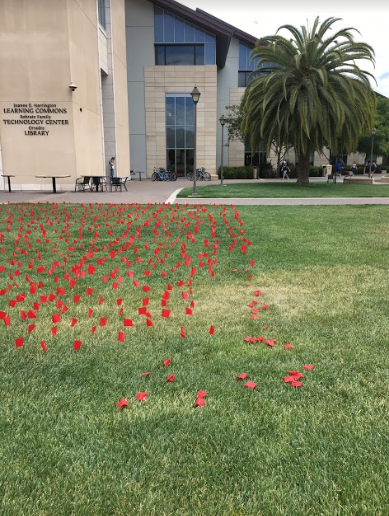 “Whenever there is discrimination against values which are inherently aligned with the liberals, our school and the administration have sent out emails offering every resource they have available to support the students who have allegedly been discriminated against,” he told TheDCNF. “But when it comes to values which align with conservative, there is usually little or no action is taken.”